No doubt you are learning very quickly the seriousness of your reprehensible and hateful act of anti-Semitism. You will come to understand the pain and agony you have caused. Please be sure to listen very carefully to the authorities and find a Holocaust survivor who will share with you  what a swastika really means.

Today I invite you to read my thoughts:

You are young man and have your whole life ahead of you. You still have every opportunity to make a difference in the lives of so many people. How do I know this? I have never met you! The answer is simple. Every human being is created in the image of G-d. The moment you were born it meant you matter to the Creator of the world. You were put in this world with the blessings of your parents to be on a mission to fill this world with goodness and kindness.

You may say to yourself, I am a small person in the face of a large universe, I am one among 7 billion. What is the purpose of my life? Please listen carefully to this favorite story of mine:

There lived a great symphony conductor, an Italian maestro named Arturo Toscanini, who led concerts all over the world. Toscanini had a biographer who would interview him periodically over the years as a part of a major book he was writing on his life. One evening, he called Toscanini and asked if he could come to the house to interview him. Toscanini answered that he could not because he would be doing something special that would require absolute concentration; he could not be interrupted.

“There is a concert being played overseas, I’m going to listen on a shortwave radio and hear how the other conductor leads the orchestra. I don’t want any interruptions whatsoever.”

“Maestro, it would be my greatest pleasure to watch how you listen to a concert. I promise I won’t say anything. I’ll sit on the other side of the room, quietly.”

“Then you can come.” The next night, the biographer came and sat quietly while Toscanini listened to the concert. When it ended, the biographer remarked, “Wow, wasn’t that magnificent?”

Toscanini said “Not really.” “They were supposed to be 120 musicians, including 15 violinists. Only 14 of them played.”

The biographer thought he was joking. How could he know from 6,000 miles away, over shortwave radio, that one of the violinists was missing?
The next morning, he called the concert hall overseas, asked for the music director as to how many musicians were playing the night before. The concert hall director told him that there were supposed to have 120 musicians, including 15 violinists, but only 14 had shown up!

The biographer was amazed. He returned to Toscanini and said, “Sir, I owe you an apology. I thought you were just making it up the other night. But please, tell me how could you know that one violinist was missing?”

Toscanini answered.” You’re a part of the audience and to the audience everything sounds wonderful. But I’m the conductor, and the conductor knows every note of music that has to be played. When I realized that certain notes were not being played, I knew without a doubt that one of the violists was missing.”

Think deeply about this story:

You and me and all of humanity are musicians in the grand symphony of history. Maybe to the average person it doesn’t make a difference how you live, what you do every day, how you work on your moral and spiritual life, but I want you to know to the Conductor of the World Symphony, (that is G-d) who knows every note of music that is supposed to be played, who appreciates the unique note that only you can produce through your life to Him it makes a grand difference!

Go for it! We have faith in you.

Every moment of your life is an indispensable note in the divine symphony. Most importantly G-d loves you for you will always have the ability to accomplish so many good deeds to make yourself, your family and the world proud of you.

Rabbi Perl is the spiritual leader of Chabad Mineola. He is a second-generation Holocaust survivor. His father survived Auschwitz and several slave camps 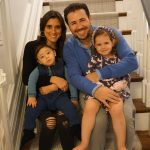 Readers Write: A day to say thanks to mothers