The recent obsession with crime is a textbook example of our political and social dysfunction. It’s time to speak some plain truths.

Every year, more toddlers are killed by firearms in this country than law enforcement officers. Read that back to yourself again. None of them even signed up to be toddlers.
Conversely, over 1,200 civilians a year in the United States are killed in interactions with law enforcement. In the United Kingdom, it’s less than a dozen.

Prior to 2020, crime rates in every category had plunged in this country, including the murder rate by 50 percent from 1990 levels. That’s quite an accomplishment. Property crime, assault and other categories also saw major decreases.

Then COVID hit and crime rates spiked. As with our inflation story, remember the “soaring” crime levels start from a low base rate. A 10 percent increase from 2020 isn’t the same as a 10 percent increase from the 1990 level. Again, this is a NATIONAL trend, and rural areas have seen higher spikes than urban ones. You would never know it from the discourse being pushed.

Only one major metro in America can lay claim for having the lowest murder rate. You’re living next to it. Like Miami? The murder rate is nearly four times as high as New York City’s. How about Texas, where people think nothing of keeping a loaded Glock in a glove compartment, the way we keep extra masks?

The crime story in this country plays like this: Last week, a man in Navarro County, Texas, shot four family members. Afterward, he turned the gun on himself. In San Antonio, an 11-year-old found a gun that was supposedly hidden and shot another 11-year-old. In Atlanta, a contractor was killed because he was making too much noise at a neighbor’s house. Didn’t hear about these incidents? Of course not.

Because if ONE stabbing takes place in the New York subway system used by millions every day, everyone from Timbuktu to Tel Aviv knows about it. No one gives a damn about the 4-year-old shot dead in the back seat of their parent’s car last weekend if it doesn’t take place here.

Absent from all this? Bail reform. Because it’s not your problem. Never was. But our degenerate political class is going to do its best to leverage a false equivalence to their own advantage to get your votes, because they can play to your worst fears and instincts and know it will work. You’re that gullible.

Small wonder our newly elected county executive blew off his own municipality’s low crime rate the same way Trump blows off election results. Boy, are we in for a good time with this guy, or what?

Same as they whipped up your hysteria over Critical Race Theory. Now school districts are tossing out Maya Angelou’s poetry and even Michelle Obama’s autobiography. What did you THINK the outrage was about, folks? The quality of children’s education? Oh, you poor saps.

Let’s face another hard truth: law enforcement itself doesn’t have clean hands either. I have yet to see any senior law enforcement authority speak out against the NRA, the lack of sound policy on gun control, or Second Amendment absolutists. Unfortunately, over the years, a cultural nexus has developed between authoritarian elements like militia groups and law enforcement, something of a bond of shared sentiments. This subject remains untouched. I believe those with the authority to speak are afraid of their own ”brothers” revolting against them. But someone has to have that talk.

The two officers who gave their lives confronting that shooter showed true bravery. Now, the leadership has to match it.

I don’t need anyone bellowing about “keeping illegal (sic) guns off our streets.” I need the law enforcement establishment in this country to start doing something about guns getting on the streets in the first place. Showing up after the fact doesn’t get it done.

This is a country that is completely unable to reckon with its own reality. Pick an issue: health care, housing, media, education, anything. There are expatriate Americans and visitors from Europe who come here thinking they’ve entered into a rotting whale carcass.

This isn’t a New York City problem or an “urban” one. It’s a uniquely American one and the people responsible need to lead instead trying to profit from the problem. Getting “tough on crime” isn’t a policy.

Readers Write: Another civil war would destroy America
Next Article 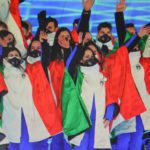 For the year 2021, 23 American companies had profits for the year that exceeded $10 billion. In the previous year…