I’ve sent several emails to the publishers of articles regarding the currently closed movie theater in Port Washington on Main Street. It was recently owned by Bow Tie Cinemas up until its closing early this year.

It’s certainly a depressing sight to see the large vacant theater, but even more so to know the history behind it. I’ve been going there since I was a little kid, from the movie “Up” and “Madagascar 3,” to the last Harry Potter movie and “Star Wars: The Force Awakens.”

I’ve spent 10 years of my life going to that theater and growing up there, entranced by the two upstairs theaters with stadium seating, and the three huge auditoriums downstairs, all connected by classic and intimate decor.

I was also a fan of the two really small theaters. There’s nothing quite like seeing a movie in that theater — it feels like being in a private screening. I haven’t been in the theater since it’s closing, but really would love the opportunity to.

It’s a beautiful building, constructed from a 1,100-seat theater house, the Beacon Theatre from the 1920s. It was later divided into a triplex movie theater in the ’70s. The balcony upstairs became one large theater, while the auditorium was split into two wide theaters, making for an incredible movie going experience.

The fourth upstairs theater was added later on, as well as old stage also being converted into a theater. Bow Tie Cinemas’ gigantic theater three, and two smaller ones were also later carved out to be made into the two intimate 36-person theaters that would usually show whatever movie was on its way out, or an old classic film.

That’s what I miss so much about the Bow Tie, how they would play weekly classics, and independent films on the weekend. I think a theater showing classic films, or independent releases could be a huge success in our town, given the space and theaters we have available.

The old Skouras Beacon Theatre is the perfect venue to to be the host to art house movies or special events. I look to other popular venues like the Alamo Drafthouse chain, and even AMC who provide food and reclining seats, which I think that the theater in town could easily house.

I think the seven distinctly different theaters are a very positive side to the building, and there is even a birthday party room upstairs that could be converted into a small lounge or eatery.

The Port Washington Theatre is one of the best landmarks of the town. It’s a beautiful building, with white paint and the inscriptions on the front still looking sharp and legible. The marquee is now a spot for advertisements and the building, despite being vacant, is decorated by art on the doors to hide the darkened lobby inside.

We should take advantage of this theater, possibly renovate it, but all in all, its structure has been so defined and remodeled through the years that I feel its true purpose is to serve as a movie theater.

Whether it be showing modern blockbusters like most chains do, or if it was an art house theater that showed independent films on its seven screens, or it was renovated into a deluxe theater with better seats where you could eat meals and order drinks, it would feel lined up with the history of this building.

It shouldn’t be torn down, or made into housing, or retail; there are plenty of buildings started from scratch in Port that are for housing or shopping. The Beacon Theatre has a wonderful history and should reopen and thrive; while closed, it’s the largest of the Bow Tie theaters including the crammed seven-plex in Great Neck, the four-plex in Roslyn, and the three-plex in Manhasset.

There’s no reason why this gigantic space shouldn’t be utilized. It’s rich in Port Washington history and I can see future generations enjoying and thriving a newly reopened independent theater in Port. 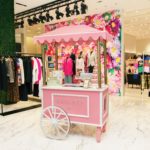