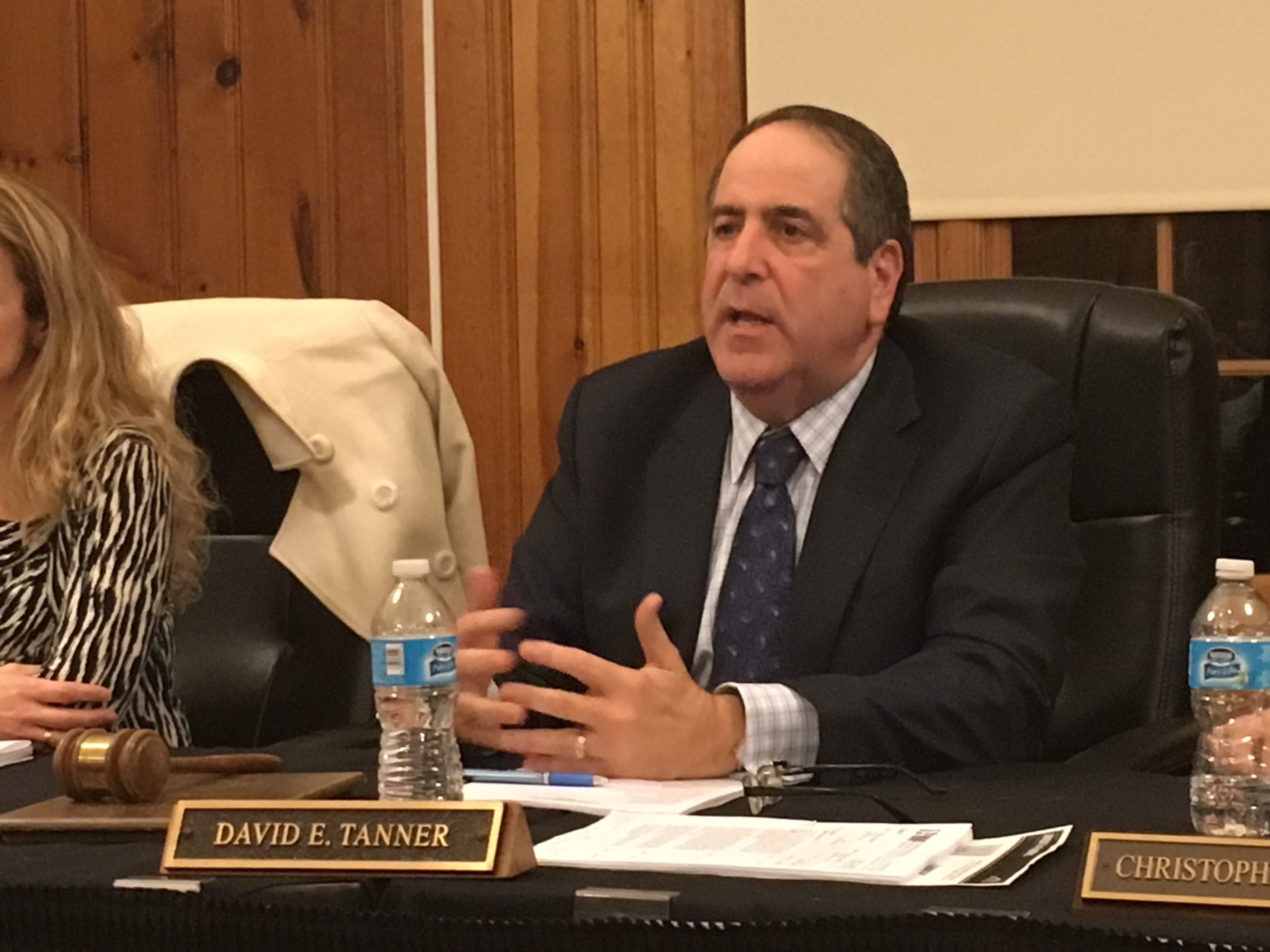 East Williston Mayor David Tanner speaks at a Board of Trustees meeting on Feb. 13, 2017. (Photo by Noah Manskar)

East Williston officials and village residents continue to disagree over security and communication, leading to a public sparring match at Monday’s Board of Trustees meeting.

The village did not publish details of a Feb. 5 incident in which a man snuck into a family’s backyard, leading two residents to charge that officials kept the public in the dark.

Mayor David Tanner said village officials did not have verifiable information from Nassau County police that they could publish, but there was no particular reason an email was not sent.

“When a matter is brought to our attention, we’re not going to repeat it. We need to validate it first,” Tanner said. “That’s the proper protocol.”

A white man wearing a black coat rang the doorbell at the home last Sunday while a girl was in the house alone, Jaqueline Sanders, the homeowner, said at the meeting Monday.

The girl didn’t answer the door, so the man ran around to the back of the house, saw her through the rear window and fled, Sanders said.

The village sent an email in January about the other two, which turned out to be false alarms.

But Stephen Leccese and Nicole Russo, two vocal critics of the village’s security efforts, said it was alarming that residents were first learning about last week’s incident more than a week later.

“Your community is uninformed because you choose which information you want to release to the public, because you’re managing the perception of crime in this community,” Leccese said.

Tanner and other trustees pushed back and rejected Leccese’s accusation, sometimes shouting back and forth with him and Russo.

The village was not “trying to downplay” any incident, Trustee James Iannone said.

A small group of residents has pushed the village since last summer to adopt more aggressive, proactive security measures such as surveillance cameras and warning signs, saying officials are not taking seriously a problem that has residents afraid for their safety.

But trustees say that small group is casting a negative light on the village by making East Williston seem like a high-crime area when it saw only nine major crimes in 2016, down from 14 in 2015.

Trustees created a Security Committee last summer to discuss additional security measures, and the village has money in the coming year’s budget for surveillance cameras at Devlin Field, a park where crime has been reported, Tanner said.

Trustee Anthony Casella read a letter from a resident saying the village’s real problem was a small group of “alarmists” drawing attention to a small number of crimes in the generally safe community.

But Russo said the village was treating her and other security advocates like “dissidents” for posting information in a Facebook group for residents concerned about security.

Another debate over communication developed after village officials sent an email about last month’s incidents that aimed to correct what they said was inaccurate information posted to the Facebook group, “Village of East Williston Community Watch.”

Walter Rivera, a member of the Security Committee, said communication about crimes has improved in recent months, but said the village could use a more timely alert system.

The crime reports since December are encouraging in that they indicate more East Williston residents are paying more attention to suspicious activity and know how to protect their homes, Atkin said.

“People are being proactive. People are more aware,” Atkin said. “… By doing that we’re trying to limit this.”

Port community comes together for injured officer
Next Article