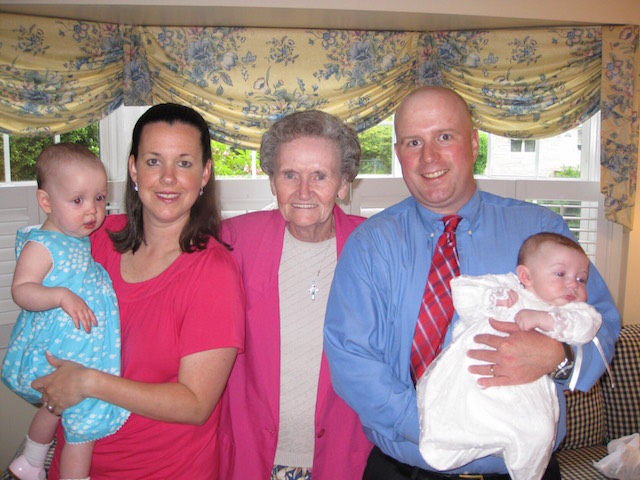 When Wantagh resident and Sewanhaka High School teacher Peggy McHugh attended Sacred Heart Academy as a teenager, she met Sister Mary Sheridan. Sheridan was McHugh’s homeroom teacher during her sophomore and junior years and, with tough love, taught her students the importance of punctuality.

“Some teachers would just let you in a little bit late, but Sister Mary was very strict and she wouldn’t,” McHugh said. “She taught me how to be on time.”

But, McHugh said, Sheridan was also gentle, compassionate and kind and had many other lessons to be learned that went beyond promptness.

“She has taught me that prayers move mountains and giving creates happiness,” she said.

The two were close during McHugh’s high school years, but drifted apart for some time after graduation. They reunited in 2002 when McHugh’s father took a teaching job at Sacred Heart. Though Sheridan and McHugh were 48 years apart in age, they became best friends.

Sheridan  is now 90 and was diagnosed with Alzheimer’s disease five years ago. She is in assisted living at the Sacred Heart Convent in Hempstead, where McHugh and her family visit her regularly.

McHugh, a math teacher, will be running the Long Island Half-Marathon Sunday in honor of Sheridan and to raise awareness and funds for the Alzheimer’s Foundation of America. The choice to run the half-marathon, McHugh said, came from the difficulty of watching her friend struggle with the disease.

McHugh said Sheridan — who received a master’s degree in the classics from Hunter College, a master’s in Spanish from Queens College and taught Latin from the 1960s until she retired in 2004 — was one of the most intelligent people she had ever met. McHugh said she wanted to turn this suffering into an opportunity to raise awareness.

“There is no brighter individual than Sister Mary,” she said. “So I felt like, ‘Oh, my gosh, something has to come good out of this, so I’m going to run.’ … I feel like this is an opportunity for me to raise money for the horrible disease she suffers from.”

There are about 5 million people in the United States living with Alzheimer’s and some 50,000 on Long Island, said Chris Schneider, AFA’s director of communications. Alzheimer’s is the sixth leading cause of death in the country and the only one in the top 10 without a cure or a disease-modifying treatment. Though there is currently no cure, there are resources and many care options.

The AFA offers services to Alzheimer’s patients and their caretakers, including a national toll-free helpline staffed with licensed social workers trained in dementia care, a memory screening program, support groups and educational conferences on dementia. It also funds research and advocates for federal funding. The AFA has Charity Navigator’s highest rating of four stars for fiscal accountability and transparency. A full 88 cents of every dollar donated goes to these services and 100 percent of every dollar marked specifically for research goes where it is intended, Schneider said. McHugh has raised nearly $2,000 so far.

“In the absence of a cure, you still need to care for people. Care is essential. And that’s why we’re trying to connect people to services and help them in their time of need,” Schneider said. “We really appreciate what Peggy is doing, both in terms of raising awareness and raising funds.”

McHugh is not the only person who has turned to physical feats in the name of Alzheimer’s awareness. Schneider said people have biked, hiked and run to raise funds for the foundation.

“We’re incredibly grateful and we’re continually impressed by people who are willing to do this kind of stuff for such a great cause,” Schneider said. “It is making a difference.”

McHugh, who was an athlete in high school and college and runs to stay in shape, has never entered a race before. She said training for the half-marathon has come with its challenges. She had neck surgery in 2013 and also deals with hip and leg problems. But she said when she feels overwhelmed, she remembers the song, “For Good,” from the musical, “Wicked.”

McHugh said the lyrics, “Because I knew you/I have been changed for good,” remind her of her bond with Sheridan and push her to keep going.

Sister Elizabeth Myles, the regional superior of the Sisters of St. Joseph in Nassau County, has known Sheridan for over 20 years. She said McHugh’s dedication to Sheridan brightens the mood at the convent.

“Peggy has been so faithful to Mary. And, not only that, but it spills over into the other sisters that Mary lives with,” Myles said.

McHugh still writes down her intentions for Sheridan to pray for. She said although Sheridan is no longer able to give her the advice, support and spiritual guidance she used to, the pair still have an inseparable bond and instinctual connection they share each visit.

Sheridan does not know McHugh is running in her honor, but McHugh said Sister Mary, who was always a private person, would be both slightly embarrassed and incredibly grateful if she did. Myles said Sheridan was always selfless and compassionate and would be delighted to know that McHugh’s awareness and fund-raising would help others who suffer from Alzheimer’s.

“Sister would die if she even knew this,” McHugh said. “She’s so private and shy. She’d be like, ‘What are you doing, Peggy?’ But I know when she does go to heaven and finds out about this  … that she would be happy. Because I’m hoping that we can help people that have to take care of people who have Alzheimer’s.”