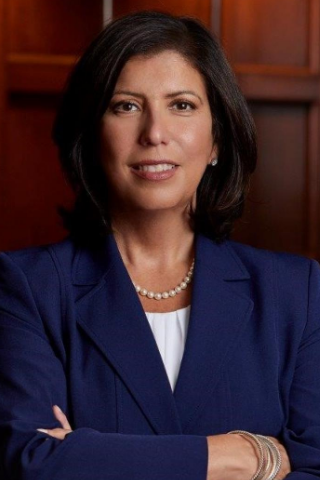 Madeline Singas, associate judge on the New York Court of Appeals, said during a keynote address at the Nassau County Women of Distinction awards event that she will continue “celebrating, mentoring and motivating young women to be better and to do better.”

The remarks came Tuesday night, when Singas, a Manhasset resident, was one of 43 women honored in Blank Slate Media’s first Women of Distinction of Nassau County awards event.

Singas, a native of Astoria, Queens, who served as Nassau County district attorney, began in 1991 as an assistant district attorney in Queens County. She said that being where she is today would not be possible without the men and women who helped her.

“I am keenly aware I would not be addressing you this evening if not for the strength and commitment of so many women who came before me and the selfless generosity, grace and support of them who took the time to extend themselves on my behalf,” Singas said. “I am also grateful to the many men in power, who recognized something good in me, who always made room at the table or helped lift me up the ladder of success.”

In 2006, Singas joined the Nassau County district attorney’s office, establishing Nassau’s first Special Victims Bureau. She worked with children, the elderly and victims of domestic and sexual abuse for years.  In 2011, she was appointed chief assistant district attorney, working to design programs for those suffering from mental illness or drug addiction.

Singas implored the audience not to be content when reaching the pinnacle of a field, which many of the women being honored Tuesday have done. Instead, she said it is important to be a trailblazer and make sure there are women behind you following your footsteps.

“We need to keep our foot on the gas and work harder to ensure that more of our sisters follow us to the top,” the judge said.

Elected twice, in 2015 and 2019, as Nassau County district attorney, Singas oversaw a staff of over 450, managing up to 30,000 criminal cases annually. Under her tenure, crime dropped in the county by more than 25 percent, making it the safest community in America two years in a row, according to U.S. News and World Report. On top of that, Singas increased female managers in the office from 57 percent to 67 percent.

Singas said that soon a seat at the table will not be enough for women, and they should strive for more.

“We cannot remain content with the possibility that women can sit in the big chairs,” Singas said. “We have to work hard to ensure that women following us can get to those corner offices, that it’s not a possibility, but a probability.”