Todd Kaminsky said he wants to “beef up” efforts to fight corruption if elected Nassau County’s district attorney in November.

Kaminsky, a Democratic state senator from Long Beach, said he believes his work in the Public Integrity Unit of the U.S. attorney’s office, one of many stops he has made in public service, would prove dividends in trying hard cases on both sides of the aisle.

“Our public corruption work needs to be enhanced,” he said in an interview with Blank Slate Media. “You need a few things such as wanting to actually do them, because these are hard cases. You also need increased technology to help you out now, heavy-duty systems that can help you see overlapping conflicts over different entities.”

Kaminsky has been attacked by his opponent for links to changes in New York’s bail laws in 2019. The changes limited pre-trial detention for most nonviolent crimes and made more offenses, such as manslaughter, eligible for bail.

Multiple commercials have run against Kaminsky claiming he is directly responsible for issues stemming from the laws, and he said he wants to set the record straight.

“My opponent’s main point is misleading and dishonest,” Kaminsky said. “I helped fix the bail laws that I think needed fixing.”

When asked why vote for legislation that had flaws, Kaminsky said that it was a vote on the state budget.

“That meant you had to vote for school funding, environmental changes, shutting the government down or not,” Kaminsky said. “I was not the author of this piece of legislation, so the idea being put out there that I am the guy responsible for it is simply untrue.”

One change Kaminsky said he will fight for as district attorney is a more efficient system. He said  he wants to explore ways that prosecutors can seek bail for people who are known to threaten society and are repeat offenders.

“Even if the offense someone is committing may not be a high-level crime, we still need to capture context,” said Kaminsky. “I prefer the federal system where money isn’t considered but if that isn’t the case, we can make sure to get prosecutors and judges the ability to argue for bail in more cases.”

Dean Skelos, the former state senator was preceded Kaminsky, was prosecuted by the U.S. attorney’s office and convicted of corruption. Kaminsky said he believes this example does not have to be the norm and that the county district attorney is just as equipped to prosecute corruption.

“Federal departments have so few people that they’re very specific with what they want to go after,” said Kaminsky. “There needs to be more partnerships. Local DA offices have an incredible role to play when making cases. Manhattan certainly tries important public corruption cases, and there’s no reason why Nassau cannot do the same and push the envelope.”

In order to preserve the integrity of the office, Kaminsky  said he recognized that public corruption from both sides of the aisle needs to be treated the same.

As an assistant U.S. attorney, Kaminsky was one of the prosecutors to convict Pedro Espada Jr., the Democratic majority leader in the state Senate at the time, in 2013.

“I will continue to prosecute corruption without fear or favor and go after it and have no trouble calling it out,” Kaminsky said.

He said he believes he more equipped  to lead  the district attorney’s office than his opponent because of his track record on prosecuting public corruption and ability to detach himself from his party.

In regard to Donnelly, Kaminsky claimed she was “demoted for doing no corruption work” when acting chief in the Public Corruption Bureau, and is completely funded by the Republican machine as a “wholly owned subsidiary of the party.”

In response, Donnelly said In a statement to Blank Slate Media: “It is not surprising that Todd Kaminsky has resorted to lying about my impeccable record as a 32-year prosecutor who held positions of trust under both Democrat and Republican District Attorneys.  Todd Kaminsky, on the other hand, co-wrote the ‘cashless bail’ law that freed over 3,000 dangerous inmates who went on to commit 9,000 new crimes. Then he tried to claim he didn’t write the bill until he was caught on video tape being thanked on the floor of the State Senate for authoring the disastrous ‘bail reform’ law.”

A recording of Todd Kaminsky’s interview can be found on The Island Now’s YouTube channel. 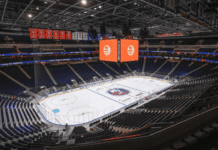 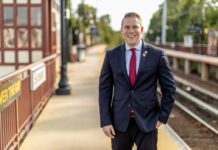 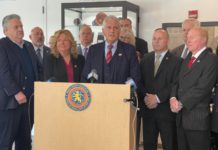