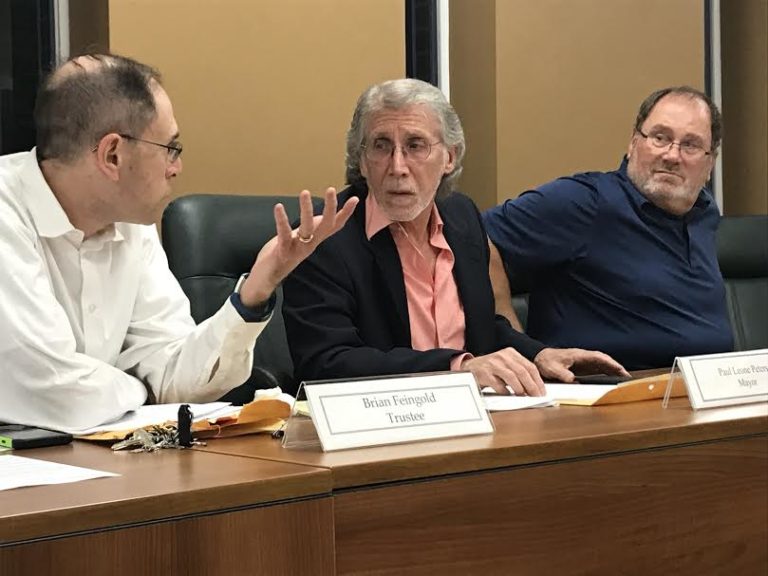 A proposal from Mark Johns, owner of the Tennis King, to install a bubble around six tennis courts in Roslyn Estates was withdrawn at a Board of Trustees meeting on Monday after opposition from Mayor Paul Leone Peters and village residents.

The Tennis King is a tennis club that operates the community’s courts.

Johns said he spoke to manufacturers about the appearance of the bubble and making it forest green to camouflage with the trees. Johns also said that the compressors that keep the bubble elevated are virtually soundless from 300 feet away or more, addressing the noise concerns of neighbors. Johns also argued that the tennis bubble would attract families and would get neighborhood children active.

“The benefits to the village is that residents would get discounts with court time and lessons, the children of the village would get preferential treatment in the junior program,” said Johns. “It would be good for the kids because it would give them a chance to get away from the computer and to play some sport.”

Mayor Peters disagreed with the proposal.

“As far as making it forest green, … there’s no leaves on those trees. It’s still going to be a big bubble standing 40 feet higher than the tennis courts. For anyone who lives around that bubble, it’s going to be an eyesore,” said Peters. “If I was living there myself, I would strongly object to that on personal grounds, I would make that decision.”

Peters also said that the bubble would increase the amount of traffic in the village, which would greatly affect the residents living along Searingtown Road and Mineola Avenue as more people come in and out to play tennis in the wintertime.

One resident, Karen Kessler, said she was concerned about the bubble creating a place for teenagers to loiter, disrupting the peace of her neighborhood.

“There are cars here at night that have no business being here, and if you have access to the roads open over here, my concern is that there is going to be an increased amount of whatever nefarious acts these kids are doing,” said Kessler.

“As far as the benefit to the village, other than the additional revenue of $70,000, there are so few residents that belong to the courts that unfortunately the only benefit really, is the money,” said Peters.