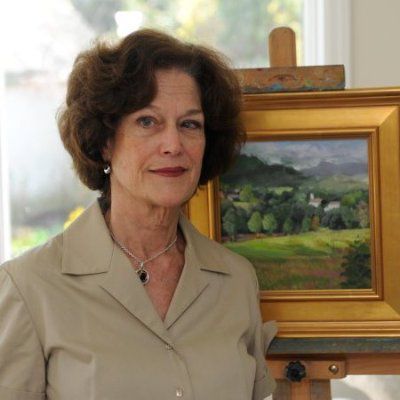 When Barbara Stein was asked by the school’s administration to help with a schoolwide mural project, she knew the perfect spot for the murals.

“Those walls were painted completely white,” said Stein, a Port Washington-based artist. “Everyone passes through the hallway on the way to class, so I just thought it was the perfect spot for the murals.

Stein and Weber students got together and painted a front-side view of the school with children playing in the background.

Stein’s contribution to the murals is just one way her art has been featured in the community.

During November, she will be  the featured artist of the month at the Dolphin Bookshop & Cafe, where her work will hang on the walls in the bookstore’s cafe.

“It’s really a great honor being featured at the Dolphin, because I’ve known the store for so long,” said Stein, who has lived in Port Washington since the 1980s and grew up in Roslyn and lived in Great Neck. “I was looking for the opportunity to showcase my work and the Dolphin seemed like a very nice, comfortable venue.’’

Stein describes herself as a representational artist, experimenting in water color, oil painting and pastel work.

Having a caring middle school art teacher, Stein said, allowed her to begin focusing her art education when she was young, which allowed her to attend New York University’s Art Education program.

Stein said she was lucky to have engaging teachers and decided that teaching was an extension of art that allowed her to help people explore their talent.

“For an artist to have someone that’s teaching them in a hands-on way is so important, especially when they are younger,” she said. “When I was younger, teaching was nice, but I still wanted to be able to explore my own work. But I realized it was a way to be around art.”

Stein taught at the State University at Farmingdale and Queens College, but said she prefers private teaching because it allows her to be in a comfortable studio setting.

While giving private lessons in Port Washington, Stein also gets together with local artists in the Art Guild of Port Washington, which she helped create and served as president for five years.

“It was a group that formed out of a few people around town,” she said. “It’s a great thing for artists to join and be with other artists.”

When the guild was getting started, Stein spearheaded the effort to find a place for the members to meet and paint and hold classes, she said.

Stein is still a member of guild.

Throughout her career, Stein has received  several art awards, including the Douglaston Art League’s Pastel Award of Merit.

“Winning an art award is really reassuring because the judging process is rigorous,” Stein said. “All of the pieces go through a juror and they decide if the art is good enough to win. It’s almost scary.”

Although she enjoys winning awards, Stein said, she also “finds a special sense of gratification” in having her art displayed in new gallerias.

“It doesn’t really get old seeing my paintings in a place like the Dolphin,” she said.