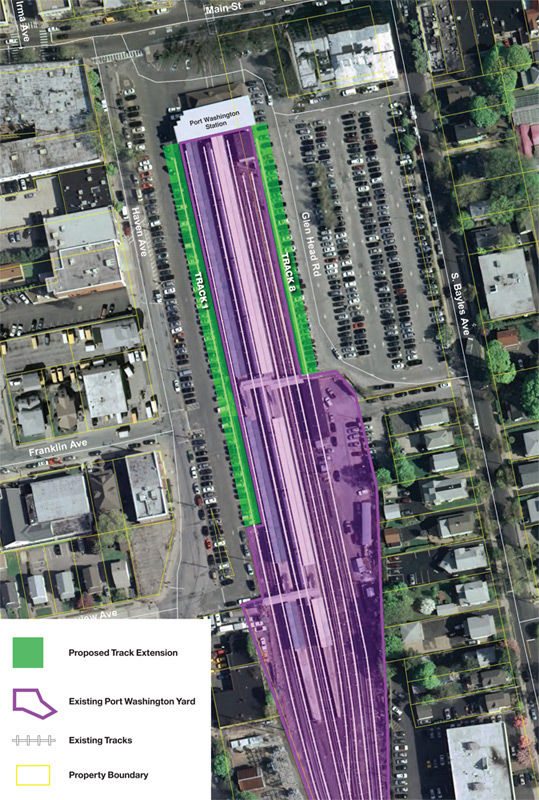 The Long Island Rail Road and the Town of North Hempstead are continuing to hold talks about extending the rail yard area of the Port Washington station, said an LIRR spokesman, Salvatore Arena.

The expansion, which was proposed in 2013, is still in the early planning stages, Arena said, but the talks are centered around two possible proposals.

The option would require the LIRR to purchase a portion of the South Bayles parking lot from the town. Forty parking spaces would be eliminated from the Haven Avenue parking lot.

Option two calls for the installation of a new track that would run parallel and to the west of Track 1 and extend into the Haven Avenue parking lot. The LIRR said the second option wouldn’t require the purchase of land from the town and 140 parking spaces would be eliminated.

There is currently no start date or estimated completion date, Arena said.

“The Town meets on a regular basis with representatives of the Long Island Rail Road to be updated on a number of projects that affect North Hempstead and its residents,” said Town of North Hempstead Supervisor Judi Bosworth. “We will continue to share any information with our residents as information becomes available. We also urge the LIRR to reach out to the community to keep them informed.”

“The proposed track extension of two tracks will benefit the LIRR’s Port Washington Branch customers, especially those using the Manhasset, Plandome and Port Washington Stations,” the LIRR said in a release.

The LIRR’s release said that the expansion would add nine more trains during peak hours to the Port Washington schedule to and from Penn Station and Grand Central Station. It will also add enhanced express service, more seats and extra service to Mets-Willets Point for Mets games and the U.S. Open, according to the release.

“To offer more train service, the LIRR must be able to position trains in Port Washington for the beginning of the morning rush hour,” the release said. “The track extensions allow the LIRR greater operational flexibility and support additional service in the busy single main track area between Great Neck and Port Washington.”