When Mike Makowsky graduated from Roslyn High School in 2009, an infamous scandal that had rocked the district was still fresh in local memory.

Years before, in the early 2000s, the district had been riding high, with seniors regularly being accepted into Ivy League schools and the schools themselves ranked as some of the best in the nation.

It all came crashing down when news broke that Roslyn District Superintendent Frank Tassone had embezzled and spent over $11.2 million of the district’s money with his colleagues over his 12-year term, spending it on a lavish lifestyle and personal needs.

“I was a seventh-grader at Roslyn Middle School when the scandal broke, and Frank Tassone quickly emerged as the boogeyman of all our childhoods,” Makowsky said.

Now a screenwriter, Makowsky has scripted and co-produced a dramatic retelling of one of his hometown’s most memorable periods.

The feature film “Bad Education,” based on the scandal, is scheduled to premiere on premium cable channel HBO on Saturday, April 25, at 8 p.m. The channel had bought the film after its world premiere at the Toronto International Film Festival.

“X-Men” star Hugh Jackman plays Tassone in the film, which also features Oscar winner Allison Janney as Pamela Gluckin, an assistant superintendent for business and bookmaker in the scandal, who was the first district official to be caught. The movie was directed by Cory Finley, best known as the filmmaker behind the black comedy “Thoroughbreds.”

Parts of “Bad Education” were filmed in Roslyn in 2018, when trailers were spotted on Round Hill Road. Area schools, however, were not used as sets, according to a letter the Roslyn school district sent to parents at the time.

“While the film is purportedly meant to entertain, it’s important to remember that what occurred in our school district was far from entertaining,” the Oct. 3, 2018 letter said. “A former superintendent and several accomplices conspired to steal approximately $11.2 million meant for our children’s education. The scandal shook our community deeply.”

The screenwriter, who wrote the features “Take Me” and “I Think We’re Along Now” before “Bad Education,” said that despite what the film’s title may imply, he “received the best education of [his] life at Roslyn.”

“From the time I began writing the script four years ago, I have always intended the project to serve as a love letter to my hometown, my school and the teachers who first believed in me, and without whom I would never be a writer today,” Makowsky said. “They saw me through the scariest, messiest and most formative period of my life. I can’t ever thank them enough.”

The main players in the scandal were sentenced in 2006.

Tassone pleaded guilty to first- and second-degree grand larceny, was sentenced in 2006 to 4 to 12 years in prison, and was given an early release in 2010. As recently as last year, he received a six-figure pension, as he did in prison.

Gluckin obtained a plea deal for a three-to-9-year sentence, and was paroled in 2011. Records indicate she last received an annual government pension of $56,870 in 2014.

Makowsky said that when he initially began researching the script, he figured Tassone would “function as a kind of evil, mustache-twirling villain.”

“The truth is far more complicated,” Makowsky said. “By almost all accounts, Tassone was a passionate educator and advocate for the students and community at large. I came to understand he fostered a whole town’s worth of strong relationships and made lots of us feel seen and heard — which made the betrayal that much more painful, even maddening. The film is an attempt to peel back some of the layers, to see Tassone and his cohorts not just as boogeymen but as the complex, imperfect people they likely were.”

Makowsky said he learned through his research that the Hilltop Beacon, Roslyn High’s official newspaper, had been “the first journalistic outlet to report on the scandal in any form.” The discovery inspired a student character named Rachel, who in the film is the first to find out about the embezzlement.

“It was great to be able to explore that part of the story further, albeit through the eyes of a partially invented student character, Rachel, and spend time with the real-life Roslyn student reporters responsible for that massive and largely unheralded achievement,” Makowsky said.

The writer noted that the Tassone scandal “is a part of our shared history.”

“I’ve admired what the school board and administration have been able to accomplish in the 16 years since the scandal, and hope they can receive the film with open minds and not from a place of fear or anxiety — and that as community leaders they can help foster a positive, constructive dialogue rather than a guarded one,” Makowsky said. “I don’t believe history should ever be ignored or dismissed, but grappled with in an honest and transparent way. It’s a lesson I learned from some of my favorite teachers within the school district.” 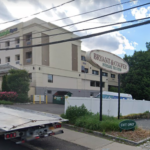