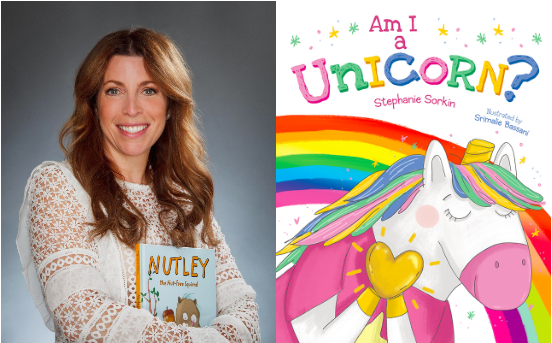 Stephanie Sorkin of Roslyn Estates, left, has been named a finalist for an INDIES Book of the Year Award for her fourth book "Am I a Unicorn?", right. (Photos courtesy of Brandsway Creative)

Stephanie Sorkin of Roslyn Estates was interviewing for what most would consider a plum job, working in player relations for the National Basketball Association, but while speaking to her prospective boss, felt the need to come clean about something.

“He said ‘What’s your dream job?’ and I think he was expecting me to say something about the NBA, which was probably my second-in-line dream job, but I said I really wanted to be a writer,” Sorkin recalled in a phone interview last week. “So at that moment he said to me, ‘Well then guess what, now you have two jobs, because anytime something comes up that needs that involves writing, I’m coming to you!'”

Now, Sorkin, a mother of three and an 11-year resident of the Roslyn area, has been recognized in a national contest for her fourth book.

Following a two-year stint at the NBA and additional time working in marketing for finance companies, in the early 2010s Sorkin got the idea for her first book, “Nutley, the Nut-Free Squirrel,” almost by accident.

“I didn’t even really plan it as a story,” Sorkin said. “It started out as more of a bedtime story, because my youngest daughter has many, many food allergies and she was about to enter preschool. I really wanted her to feel included, so I made up this character. It was something I had done often but then this one all of a sudden was taking the shape of a story.”

Sorkin discussed the idea of a squirrel allergic to nuts with friends and family, and put pen to paper in 2011.

“I almost felt responsible like that this was my responsibility to share it with people because I felt like it would really help other children, even if they didn’t have allergies, but even with inclusion and acceptance,” Sorkin said. “To be honest, I just started googling how to publish a children’s book. It was a dream of mine for the longest time, it was all I really wanted to do, but it’s not an easy place to just walk right into. It’s difficult to first get started so I decided to self publish.”

“Nutley” was published in 2013, and brought Sorkin an Outstanding Author Award from Mascot Books. Her next works, “Chocolate Shoes with Licorice Laces,” and “Frenemy Jane, the Sometimes Friend,” were also honored by the independent publishing community.

Sorkin’s latest book, “Am I A Unicorn?,” follows a unicorn who breaks her horn and tries to get it fixed in fear that she won’t be recognized without it.

“We all have something about ourselves that we know that the outside doesn’t exactly match the inside,” Sorkin said. “So when the unicorn felt like their most definitive feature was gone, they felt had to prove that they were a unicorn.”

The inspiration came from Sorkin’s many visits to schools and social groups where she would read her books aloud, she says.

“I did visit hundreds of schools in the past and you sometimes see a child that is struggling whether it’s a special needs child or a child with an emotional difference,” Sorkin said. “There was a school I went to there was a child who liked math and everyone else liked the Yankees. So any struggle that you’re going through that there is, I could really compare it to the unicorn.”

Last week, “Unicorn” was recognized as a finalist for an INDIES Book of the Year Award in the children’s category, an honor that “Nutley” was nominated for and “Chocolate Shoes” won.

“I didn’t know if I’d be a finalist, because I’m sure that they have hundreds of entries,” Sorkin said. “The winners will be announced sometime in June, so I anxiously await that.”

Sorkin’s books are available online at Amazon.com and from Mascot Books. 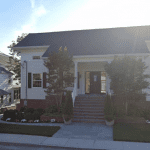 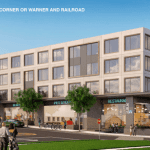