The site of the second PGA Championship in 1919 may become the next residential development site in Roslyn Harbor.

Engineers Country Club members voted Monday to allow the sale of the 18-hole course and surrounding property to RXR Realty of Uniondale. A price was not disclosed.

Club President Clifford Saffron told Newsday that 81 of the 84 equity members cast ballots, with 77 in favor of the sale and 4 against.

According to a letter e-mailed to members Tuesday, the board is now proceeding with the negotiation of the sale and expects to close the deal by November. The club was put on the market this summer after members learned of the club’s financial struggles in a July newsletter.

Newsday reported RXR plans to use the golf course as an incentive and will develop a high-end residential development on part of the 210-acre property. RXR Realty recently developed the Ritz-Carlton Residences in North Hills as well as Garvies Point in Glen Cove.

Before any changes could be made to the property, the Village of Roslyn Harbor would need to approve building and zoning permits for RXR Realty.

The club was incorporated in January 1917 by the Engineers Club in Manhattan when the W.R. Willet Manor estate was put on the market. The plan for the 210 acres was to fit two courses onto the property, but original designer Herbert Strong dedicated 150 of the acres to the course.

The house was later destroyed in a fire in 1919 and the stable was converted into the course clubhouse.

“No young club in the history of golf, let it go back 400 years, has come in for as much discussion and comment as Engineers,” a sports columnist wrote in 1920 about the course. “The main nerve test will be on the greens. You will find strong men weeping as they finish a round.”

The club was redesigned in 1921 by golf course architect Devereaux Emmet, and the course was listed in the Frank Menckeís Encyclopedia of Sports as one of the best courses in the country. 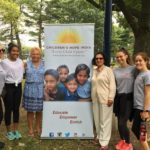