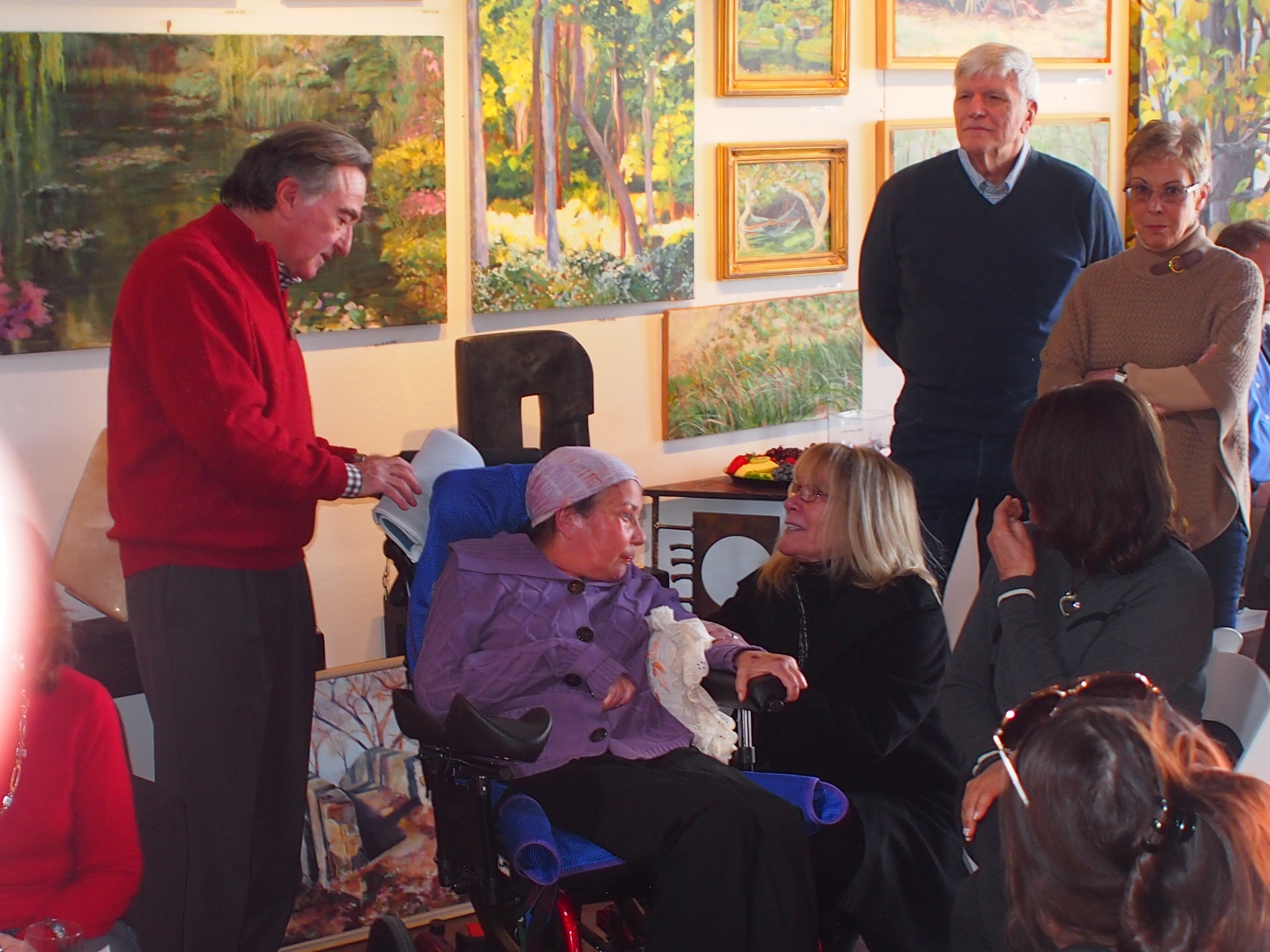 Myra Fox (second from left) speaks with friends and family at a gallery exhibition of her paintings.

One hundred fifty people attended an art exhibition opening at the Roslyn Village Gallery on Sunday to see the paintings of Myra Fox, who suffers from a severe form of brain cancer that has rendered her unable to speak or walk.

She “had a smile on her face the whole time,” said Jillian Fox, her daughter. “You could tell she was happy to see people.”

“Local artists know her,” said Marsha Tarlow, the owner of the Roslyn Village Gallery. “Everyone who has painted with her has said wonderful things about her.”

“People were lined up to say hello to her,” Tarlow added. “Her art teachers, people she has gone on painting trips to Europe with.”

Over the years Myra Fox composed scores of works, occasionally participating in exhibitions that showed four or five of them, said Stewart Fox, her husband.

A year and a half ago, Myra and Stewart Fox moved upstate to Saugerties.

Just a few months later, Stewart Fox, a physician, took her to the hospital for a CAT scan hours after she had difficulty completing her sentences. Doctors discovered a malignant tumor on Myra Fox’s brain.

After an initial surgery, she underwent chemotherapy.

“Initially she was doing art,” Stewart Fox said. “But not for very long because she slowly was developing weakness in her arms and legs from radiation and chemotherapy.”

Though debilitated, she had full functioning of her body until last September, when a blood-related medical emergency, akin to a stroke, left her paralyzed on the right side of her body and unable to speak.

At the exhibition, Myra Fox recognized many of the people with whom she used to paint, Jill Fox said.

“People weren’t sure if she could understand who they were but mom knows,” she said. “It’s not that she can’t understand who you are, she just can’t say ‘hello.'”

One hundred twenty two of Myra Fox’s paintings were on display, and at least half of them sold on Sunday, Tarlow said.

The event raised about $14,000, a portion of which will go to the Brain Tumor Center at Columbia University Medical Center, which provided care for Myra Fox.

The month-long exhibition will be the first held at the Roslyn Village Gallery’s new, larger space on Old Northern Boulevard.

“It was rare for someone to walk out of the gallery without purchasing something,” Jillian Fox said. “Just to say they had something meaningful from her.”

18 seats to be decided in G.N. village elections