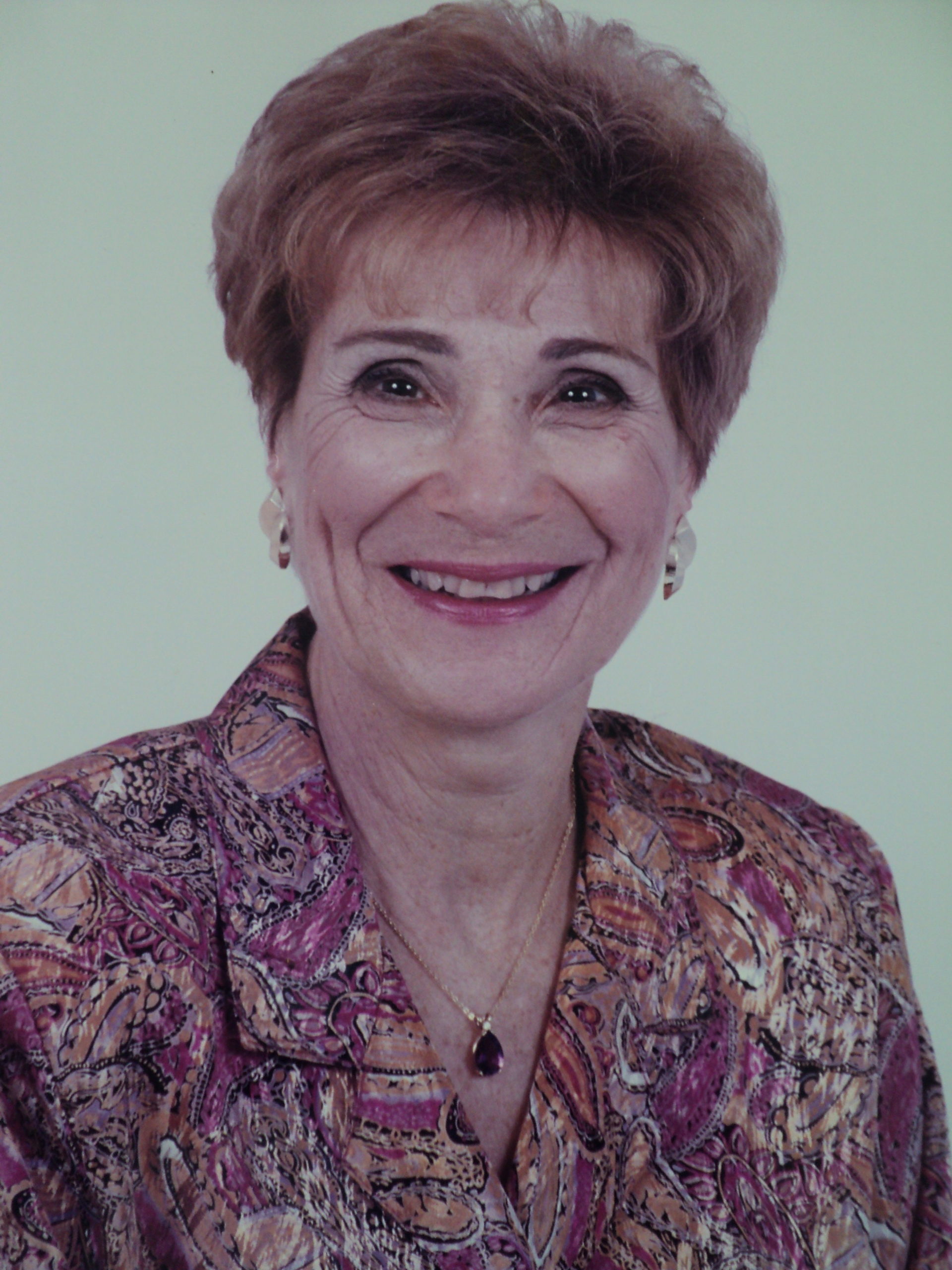 Ruth Tamarin was first elected to be a commissioner of the Great Neck Park District in 1998. (Photo courtesy of the Tamarin family)

Ruth Tamarin, a longtime Great Neck park commissioner, educator and champion for both the disabled and her family, died last Thursday after a yearslong battle with cancer. She was 83.

In some ways Tamarin died as she had lived: with her family in mind and determination, whether it was raising her sons Michael and David, who is developmentally disabled but now holds two jobs, or pushing for what she felt was right.

“She just really, really liked going all out to help people as best she could – this is what she was made of and she really took joy in helping people,” her son Michael Tamarin said before the more than 100 people gathered at her funeral. “And if you got in her way she would just run over you, but that was part of the deal to do the right thing.”

Tamarin was perhaps best known in Great Neck for her work with the Great Neck Park District, where she served as a commissioner for more than 15 years after being elected in 1998 and resigning in 2014 for personal reasons.

Family members and associates described her as someone who was kind and dedicated, but strong, trying to help grow the district and its offerings to be more inclusive.

“The Park District ran through her veins,” JoAnne Rosenfeld, a secretary at the Great Neck Park District, said last week.

While serving as commissioner, Tamarin helped spearhead many initiatives. Among them were the expansion of the Parkwood pool with the lazy river, growing the waterfront of Steppingstone Park through acquiring a parcel of the George M. Cohan estate, and establishing a special playground in the Village Green that could be used by everyone.

Daniel Nachmanoff, who served as a commissioner for six years, said she always seemed to be intelligent, involved and interested in listening to other people.

“Ruth was small of stature, but a giant in her devotion to the Great Neck community,” Nachmanoff said.

Several letters to the editor in 2013 also credited Tamarin as a key part of a team that enhanced facilities throughout the district, including its aquatic center and the Great Neck House, while exercising fiscal responsibility.

“The best testimonial is a visit to a park, particularly Steppingstone and the park for disabilities on the [Village] Green. Great Neck has been described as one of the best urban park systems in New York state,” her cousin Stephen Schensul wrote in his eulogy. “We hope to recognize Ruth Joan’s contribution with a permanent memorial established in one of the parks.”

Michael Flamhaft, a family friend of the Tamarins, said that Ruth “championed her son” David at a time when people tended to not speak openly about children with disabilities.

She went through “a lot of grief” to get people to accept her son because of “standard fears and prejudices” about someone who’s mentally challenged, Flamhaft said. In the last few years, he said, Tamarin also petitioned the cooperative where she lived to change the title of her apartment to her son David.

Tamarin also co-founded FOCUS, a Great Neck-based nonprofit focused on helping people with disabilities, in the late 1980s. This followed what Schensul described as Tamarin forging a “grassroots” movement of parents and advocates to push for more public resources on Long Island.

She was also a member of Long Island ACLD, a not-for-profit agency aiming to boost opportunities and independence for people with disabilities.

Flamhaft said there’s “no question” that her dedication to those with special needs began at home.

“She saw the need of her handicapped child as a general need which exists in the community,” Flamhaft said, “and then she fought for the rights of those kids to have things they otherwise would not have gotten.”

“I’m really devastated that she’s gone,” Flamhaft later added, describing his “admiration” for her. “I loved her like a sister forever.”

Before serving with the Great Neck Park District, Tamarin was a teacher – first in Oceanside and then in Great Neck, after she and her husband Milton, or “Mickey,” moved  in the 1960s.

In addition to teaching English as a Second Language, Tamarin worked in various elementary schools, served on task forces and outdoor education projects and was active in PTAs and the United Parent-Teacher Council.

Prior to teaching, she was also a writer and editor for Grolier’s Book of Knowledge.

After retiring from teaching and before joining the Park District, she worked as an adjunct professor at C.W. Post and part-time supervisor of student teachers.

Cynthia Resnik, who knew Tamarin since they were students at Hofstra University over 60 years ago, described Tamarin as someone who had always been “very much a leader,” because of her outgoing nature, penchant for planning and joining every single club she found interest in – the opposite of Resnik’s shy but spur of the moment demeanor.

They weren’t friends until after the superintendent of schools interviewed them at the same time in Oceanside for teaching jobs, Resnik said, when he proposed they would not get paid until February despite starting in January because they hadn’t yet graduated.

“So, together, we looked at him and said, ‘no,’” Resnik recalled. “If we’re starting in January, we’re getting paid for the month of January, and that’s how we came together.”

Since then they were friends, Resnik said, balancing each other out.

In addition to her advocacy, Tamarin was also a board member of the Great Neck Historical Society, a member of the Long Island Association of Special Districts, an adviser to the Friends of the Parks Foundation, which she helped found in 2003, a board member of Club Chai at Temple Beth-El, and part of the Community Childcare Partnership.

Tamarin was born on July 21, 1934, to Eleanor and Harry Richter, who were a piano teacher and salesperson, respectively, and grew up in Rockville Centre with her sister, Lila.

Deborah Haut, Tamarin’s niece and Lila’s daughter, recalled frequent visits to see her Aunt Ruth – her “second mom” – where she and her cousins would play in their apartment, visit the lake, Jones Beach and make it a point to always be available.

Haut said that the value of family – as well as being strong – was instilled in both her mother and Tamarin growing up.

“Ruth and my mom were both brought up to instill always doing your best and putting your best foot forward, giving back and giving as much as they can,” Haut said, “but family was always first, no matter what.”

“There isn’t anything that she wouldn’t hit head on,” Haut later added. “Ruth didn’t shy away from anything, especially when it came to her family and rights of other people who just aren’t heard.”

Tamarin was buried at Beth Moses Cemetery in West Babylon next to her husband Mickey, a civic activist who died in April of last year.

The family requests that, in lieu of flowers, donations be made in her honor to the Great Neck Park District.

Tamarin is survived by her sons, David and Michael, her sister, Lila, and many cousins, nephews and nieces.

Rabbi Tara Feldman of Temple Beth-El, who oversaw the funeral service, closed  by reading what David, who works at the Park District and U.S. Merchant Marine Academy, had said about his mother – recalling trips to IHOP for breakfast, a cruise to Alaska, Disney and Mexico, and how she got shows at Steppingstone Park started.

“She was a wonderful woman, a wonderful mother, so wonderful to help me get my apartment that I love. She took me to doctors and dentists a lot. Best park district commissioner in the world and everyone loved her,” Feldman read.

“My mother hugged me every time she saw me and said, ‘that’s my boy,'” the remembrance later concluded. “I’m going to miss her so much.” 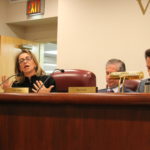 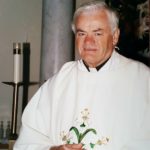 Father Patrick Whitney reflects on 50 years with the church