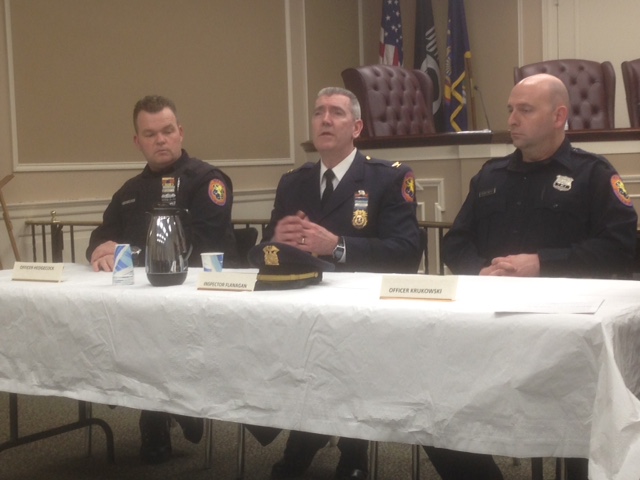 Nassau County police officials encouraged religious leaders to take up efforts to increase security at their facilities in response to concerns about hate crimes.

The officials spoke at a forum North Hempstead Town Hall in Manhasset that the town held to address concerns that many residents have had about recent messages of hate and anti-Semitism.

“There is no room in our town for anti-tolerance, messages of hate, and anti-Semitism,” town Supervisor Judi Bosworth said. “And it’s up to us to say ‘no, not here.’”

Inspector Daniel Flanagan, commanding officer of Nassau County’s 3rd Police Precinct, said that Nassau County has not seen a lot of hate crime specifically with regard to threats against Jewish community centers so far this year.

Hate crimes are down this year compared to the same period last year, though the precinct has responded to concerns and increased patrols particularly in areas of worship, Flanagan said.

“Any school or house of worship should have its own security,” he said.

Krukowski said police officers do this through a “security survey,” which they complete with a written report of recommendations.

“It’s a major operation,” Krukowski said. “But we will do it with each and every one of your congregations.”

William Peirez, the honorary vice president of Temple Beth-El in Great Neck, said police officers gave his temple “many great ideas” when they did a walkthrough there about two months ago.

Rabbi Michael Klayman of the Lake Success Jewish Center said that though his congregation has increased security, a great concern still exists during the Sabbath service when there are many people in the building and the doors are not locked.

“Even if we were there, and presence is always good, we won’t know who belongs there and who doesn’t,” Krukowski said. “Your congregants are going to be the ones who notice that.”

Flanagan said there is some grant money available for security from the federal government for securing houses of worship.

A program is also in development that will enable the county to have access to the security systems in facilities that permit it within the next year or two Flanagan said.

The program would be used in emergency situations and would enable the county to access video footage of a particular facility in real-time.

Flanagan encouraged people to sign up for the police department’s Security Police Information Network (SPIN), which is an email designed to send out pertinent crime-related happenings and trends to certain designated groups.

“We need to be vigilant ourselves, with our elected [officials], with our police commissioners, detectives and officers,” town Councilwoman Anna Kaplan (D-Great Neck) said. “We all have to work together to keep our town safe.”

Bosworth said the town will sponsor an event called “Not in our Town” on May 4 at Clinton G. Martin Park in New Hyde Park to address the importance of tolerance and opposition to messages of hate.