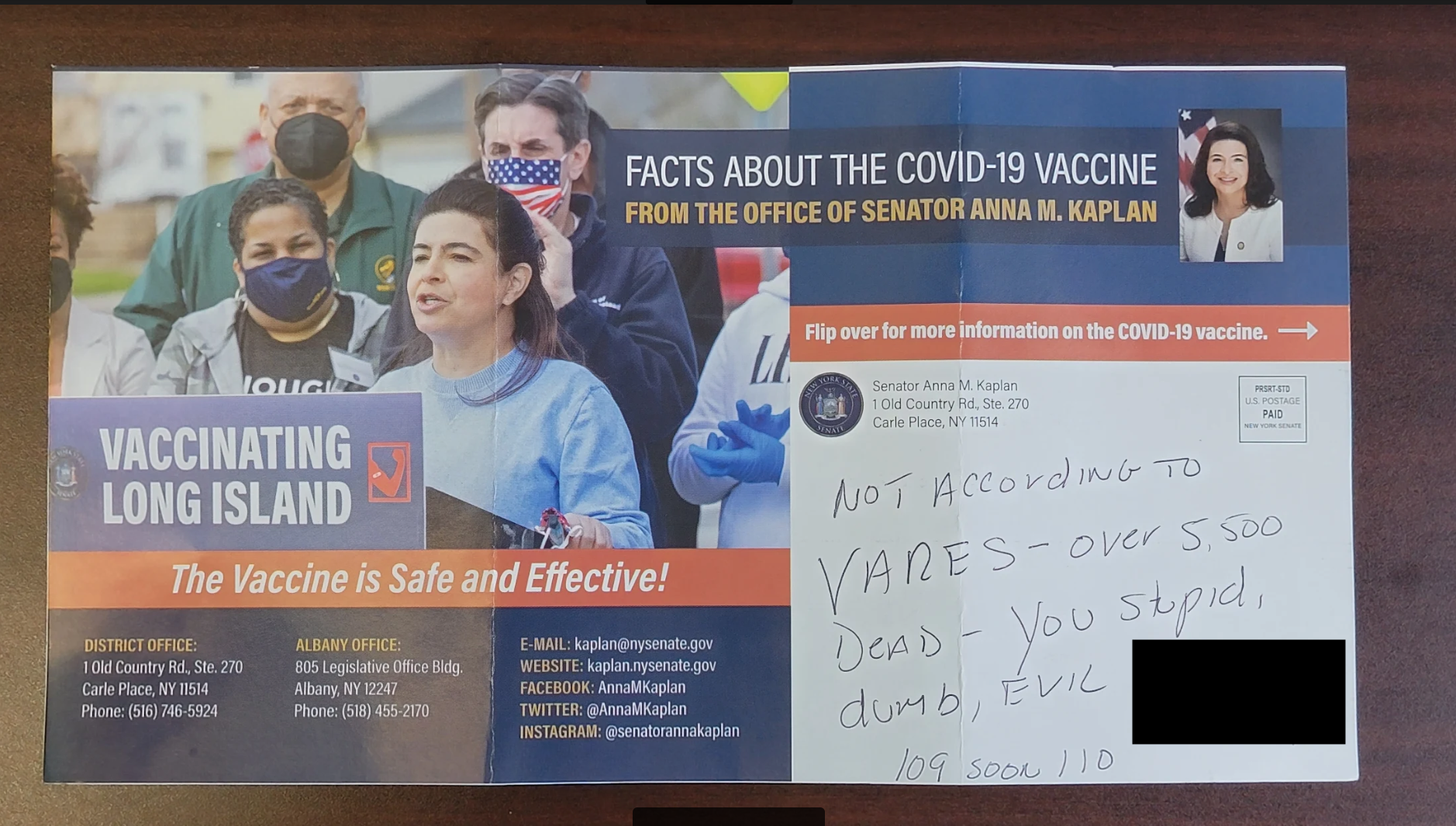 State Sen. Anna Kaplan (D-North Hills) received a piece of hate mail with explicit, insulting language and an anti-Semitic reference on Tuesday in response to one of her mailers with information on the coronavirus vaccine.

Kaplan posted a picture of the hate mail, which was written on the mailer providing Nassau County residents with vaccination information, criticized the literature, and called Kaplan “stupid,” “dumb” and “evil,” along with a profane insult.

The sender also wrote “109 soon 110,” a phrase the Anti-Defamation League said is used by white supremacists referring to the number of countries that have expelled Jews, implying the United States would be the 110th to do so.

“This incident is a sad reminder that Nassau County is not immune to hatred and white supremacy, and it’s our responsibility as a community to forcefully reject this evil whenever it reveals itself among us,” Kaplan said in a news release. “As a former religious refugee who fled anti-Semitism in my birth country, I have seen first-hand how anti-Semitism begins to permeate a society and ultimately lead to violence against Jewish people.”

“This is vile Anti-Semitism and it has no place in Nassau County,” Nassau County Executive Laura Curran tweeted

The Nassau County Police Department was notified of the incident and is conducting an investigation, according to the news release.

Kaplan, who is Jewish, was the first refugee elected to the New York State Legislature and has been an outspoken voice against anti-Semitic acts in Nassau County and New York. In May, the state Senate passed a bill backed by Kaplan aimed at banning hate symbols from being displayed on public property and taxpayer-funded equipment.

“We all deserve to live in a community free from hatred and bias, and I’m extremely grateful for the efforts of our Nassau County Police for their hard work and dedication to keep our community safe, and for their efforts to investigate this matter,” Kaplan said.

The legislation came after Confederate flags were hung in the window of a local fire department in Nassau County and from the side of a fire truck that appeared in a parade in Suffolk County last year, Kaplan’s office said.

Expanding on legislation enacted last year, the bill would bar municipal corporations, towns, cities, villages, fire districts, volunteer fire companies or police departments from selling or displaying symbols of hate, except when the display is for educational or historical purposes.

The legislation passed the Senate on May 25 with a vote of 56-7, and now goes to the Assembly where it is expected to be taken up by the Rules Committee soon.

The North Shore has been no stranger to anti-Semitic acts over the past year. In October, vandals spray-painted 12 swastikas after breaking into the Port Washington Police Athletic League’s Sunset Park clubhouse.  PAL Executive Director Rob Elkins said the vandals broke into the clubhouse, found a can of red spray paint in the clubhouse and sprayed swastikas “all over the inside of the building, on-field equipment, on balls and bats, on the bathroom walls, on our tractor, and on the front door to the building.”

In December, images circulated online of the North Shore Hebrew Academy High School website being the victim of a hacking scheme featuring anti-Semitic images, messages and songs. Screenshots of the website were then posted with anti-Semitic messages with slurs above a notification that the website was under construction.

In the website’s “About Us” tab, there were more pictures of Nazi soldiers holding up swastikas and referring to the school as the “North Shore Concentration Camp.” The tab also featured a profile on Adolf Hitler and outlined “field trips” the students would take to Auschwitz. The post said that students would have to “walk into an SS office and declare themselves as Jews,” and listed the deadline for the application as “January 1945.”

Both of those incidents were under investigation by the county Police Department, but efforts to reach a law enforcement representative for an update on their status were unavailing. 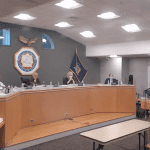