“Incredible Feets was established in 1976 by Gary Weiss and from the beginning, they had a ‘never say no’ policy when it came to supporting the local community,” Kaplan said. Kaplan said that the retail store specializing in footwear, which has five locations on Long Island, has been an integral part of helping the community.

She said that this involved hiring young people, donating and contributing to local fund-raisers and charities, and helping schools, clubs and places of worship. Kaplan said the store has been known to give sneakers to members of the community.

Kaplan highlighted Incredible Feets’ charity program “Neighbor in Need,” in which the store collects thousands of sneakers, clothing and sports equipment to donate to the Long Island Coalition for the Homeless. The program has existed since 2016.

Cindy Braham, a representative from the coalition, thanked store manager Jordan Mintz and the Weiss family “for continuing to get footwear directly onto the feet of our Long Island neighbors in need and putting smiles on the faces of everyone, especially the children.”

“These items find new life in the hands and on the feet of our neighbors in need of a helping hand,” Kaplan said. “Incredible Feets represents the best of what a business can be and I’m truly grateful for their contribution to our community.”

“Promoting local businesses and everything that this store does and the four other locations that you have is really something that we should cherish,” Zuckerman said.

The Long Island Coalition for the Homeless was also present to commend Incredible Feets’ charity work. “Jordan and his team have consistently looked for ways to help Long Islanders in need while raising awareness about the challenges so many of our neighbors face every day,” Greta Guarton, executive director of the coalition, said.

Brandon Weiss thanked his father for “starting this culture of giving back to the community.” Weiss said that he carried the tradition on from his father and Mintz followed along. Weiss said that the Incredible Feets team was thrilled to be honored by Kaplan and other local leaders saying, “While it is never the fanfare that drives us to be charitable, being recognized by others is still a great honor and it feels good.”

“I’m just beside myself that something I thought would be a great idea has gotten to this point,” Mintz said. “To be a part of the community is never going to go away.”

He said that they will continue to contribute to their community, run “Neighbors in Need” and help out however they can. 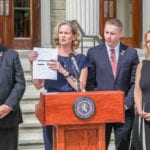 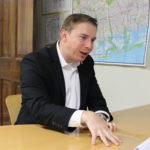