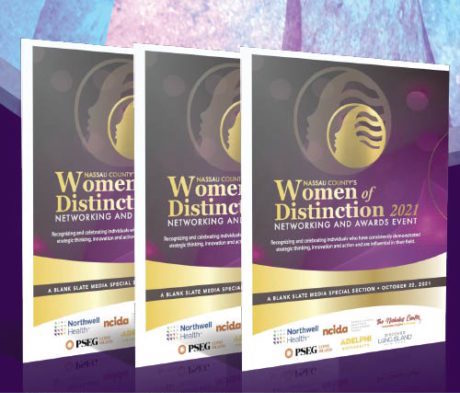 In writing about Fred Astaire in a comic strip in 1982, Robert Lee Thaves wrote that “sure he was great but don’t forget that Ginger Rogers did everything he did, backwards and in high heels.”

Thaves could have been speaking about many of the 42 exceptional women featured in Blank Slate Media’s first annual Women of Distinction of Nassau County awards section.

Not only have they achieved much, but often they have often done so as trailblazers in fields with few if any role models for them to follow and perhaps more than a little skepticism among their professional peers.

Often with the responsibilities of a family falling most heavily on them.

In doing so, these women have helped expand the definition of the American Dream and enriched the lives of everyone in Nassau County.

Madeline Singas, who will serve as the keynote speaker as well as an honoree at the Women of Distinction awards ceremony on Nov. 9, is but one example.

She is the daughter of Greek immigrants, grew up in Astoria, Queen and rose to the New York State Court of Appeals – the highest court in the state.

In between, Judge Singas established Nassau County’s first Special Victims Bureau as a member of the District Attorney’s Office, was appointed chief assistant district attorney and was elected twice as district attorney.

I myself have drawn inspiration from someone who was denied the opportunity to excel in a career by circumstance.

My mom survived the Holocaust where she lost her father in a death camp, was separated from her twin sister and then came to America at the age of 15 by herself.

She had spoken five different languages in attending schools in four countries before coming to the United States and then scored the highest in her class in the English Regents – her sixth language.

But a year after she graduated high school she got married and a year later I arrived – one of three children my mom would have by the time she was 23 and four by age 30.

I always wondered what her life would have been like if she hadn’t had children so young. If she had been able to go to college and pursue a career. And how fortunate I was not  to have the responsibility of raising a family so far from home.

It has given me a far greater appreciation of the opportunities I have had.

The women we are honoring this year have also taken advantage of their opportunities, making their own marks in public service, education, business, health care, not-for-profits, engineering, real estate and business.

Although each individual represents a different type of work, they all have something in common: their determination to make a difference and have a long-lasting impact.

Our honorees have all worked their way up the ladder, and are now leading their own teams and inspiring others.

While growing their careers, they also have found ways to fulfill passions outside of the office including mentoring,  volunteering and serving on various boards in different capacities.

Each of our 42 Women of Distinction share similar stories of success that demonstrate the ever-widening possibilities open to women and the benefits it offers to all of us.

We hope the accomplishments of all those presented here will inspire both men and women to greater heights and increase their appreciation for those who have succeeded.

Congratulations to all. We know you will continue to have success.