The No. 1 one ranked LIU Post softball team took on No. 2 Mercy College at the LIU Post Softball Complex on day three of the East Coast Conference championships on Friday, May 4.

The Pioneers led the Mavericks from the first inning, with junior infielder Leah Mele’s single through the left side, allowing for sophomore outfielder Abby Fortin and junior catcher Julia Seader to put two points on the board. 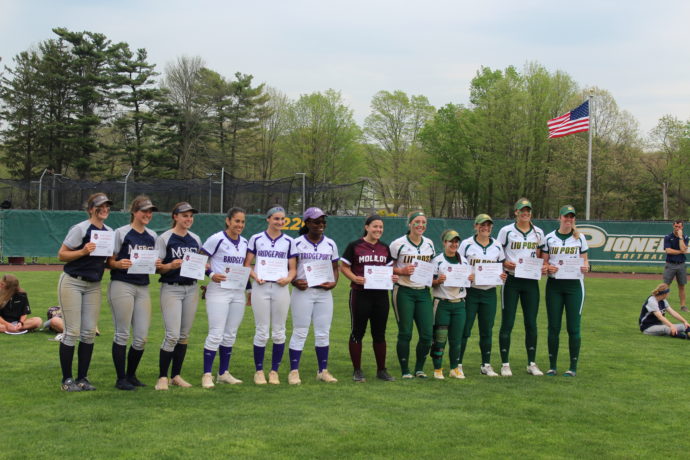 Post held Mercy at bay until the top of the seventh inning, when the Mavericks tied the score, with freshman Casey Akers and junior Mikayla Newham both contributing a point to their team.

In the extra time, Mele started with a diving catch behind first base for the first out of the eighth inning.

The Pioneers captured the game in the bottom of the ninth with a phenomenal play. Sophomore infielder Allie Laird hit a double to stay safe on second base, followed by a sacrifice bunt by senior first baseman Gianna Gatto, allowing Laird to take third.

The game-ending hit was struck by sophomore outfielder Ashley Casazza, who hit a single, leading Laird to a walk-off win.

“Adrenaline was definitely pumping the entire time,” Casazza said. “I wanted to do it for my team, so it really was great when they all came in and hugged me at the end.”

Coach Jamie Apicella said he is proud of the ladies, and is happy to be returning to the conference championship.

“Just a great job; I’ve been calling them the ‘cardiac kids’ all year long because they’ve been putting me through these types of games all year long,” Apicella said. “The conference is tough; every team has phenomenal lineups and great pitching so we are excited to be there.”

After the game, there was an announcement of the ECC all-conference teams.

Apicella won coach of the year and freshman Breanna Klaiber was rookie of the year after a great first season at LIU Post.

Sophomore pitcher Katie Humhej took home the pitcher of the year, and this game was no exception to her excellence.

In ECC play, she was undefeated in regular season, going 10-0. Humhej sits in the conference’s top-five with 140.2 innings pitched and 114 strikeouts.

She finished top in the ECC and 27th nationally with six shutouts this season, four of those during conference play when her pitches were even tougher to return.

“I had a lot of back up from my teammates; they’ve been there for me the whole year,” Humhej said. “It’s been really, really great.”

Humhej was not the only big winner of the day.

Abby Fortin was named conference player of the year. Fortin leads in multiple categories in league statistics. She led the league with 69 hits, six triples,12 home runs, 52 runs batted in, and a total of 128 total bases. She also ranked in the ECC’s top-five with 45 runs scored.

The Pioneers advanced to the ECC championship final on Saturday, May 5, at 12 p.m. at the LIU Post Softball Complex in Brookville.