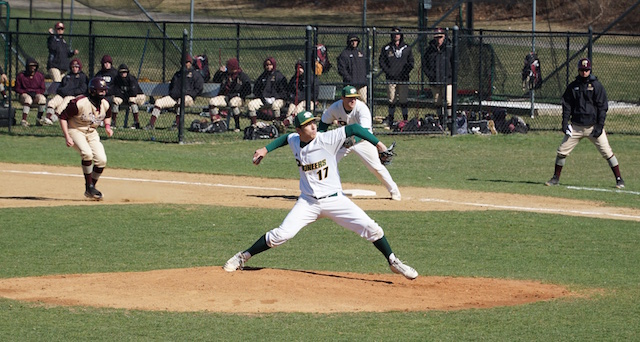 Story and Photographs by Griffin Albrecht

On a chilly Monday afternoon, April 1, the LIU Post baseball team played St. Thomas Aquinas Spartans at home in their final game of a four game series dominated by Pioneers. In the two prior games of the series, the Pioneers won skillfully, earning a 25-5 win in their first matchup on Friday, March 29, an 11-6 win in the second game, and a 9-4 win in the third game of the series on Saturday, March 30.

The Pioneers dominated in the outfield during the series’ last game. Freshman pitcher Joshua Loeschhorn, who tied his strike record with six in this game, was a key to the team’s success. “I thought Josh was outstanding on the mound,” Mike Gaffney, LIU Post’s head baseball coach, said. “He gave us the performance we needed.” 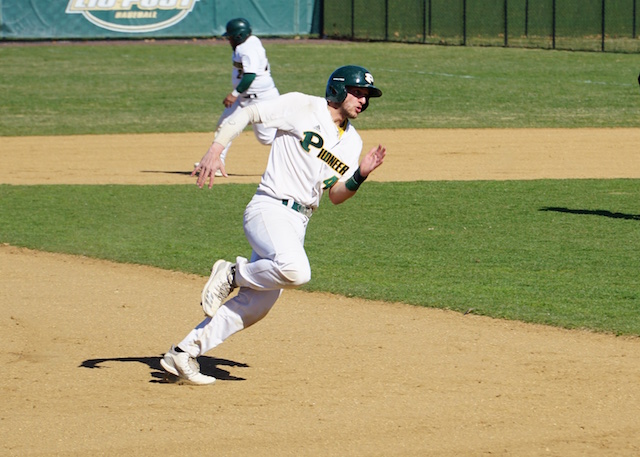 The Pioneers scored in the first couple of innings, including two runs by senior Anthony Vaglica in the second inning and again in the fourth with a line drive to left field by junior Zack Fritz. The Spartans scored their first run in the fifth but were quickly answered by a run batted in from senior Dave Brehm. The Pioneers walked away with the victory.

“After such a successful weekend, we could have come out a little too relaxed, but we didn’t,” Gaffney said. “The team came out with the urgency of getting a sweep, not being content with just winning three out of four.”

The Pioneers next took on Mercy College on Saturday, April 6 and Sunday, April 7. “We need to have the urgency we had this weekend offensively, have a good weekend on the mound, and I’m confident we’ll be successful,” Gaffney said before the Mercy series.

This article was originally published in the Pioneer, LIU Post’s award-winning student newspaper, www.liupostpioneer.com. The article is republished by Blank Slate Media with the permission of the Pioneer.