Two swastika images were spray-painted on walls at Sousa Elementary School in Port Washington, according to the district's superintendent. (Photo courtesy of Google Maps)

“At approximately 6:40 p.m. [Sunday] evening, the district was notified that two large swastika images were discovered painted on the front and rear exterior facades of the John Philip Sousa Elementary School,” Hynes wrote. “The Port Washington Police and the Nassau County Police departments were immediately notified. The district is working with law enforcement to conduct an investigation and will take all appropriate action at the conclusion of the investigative process. I am outraged this has happened and will make sure we do everything we can to find the perpetrator(s).”

Hynes added that the images would be removed by the time students reported to school the following morning and that the district would work with the Holocaust Memorial and Tolerance Center in Glen Head to educate students on hate symbols.

“The district has a zero-tolerance for offensive sentiments and places a strong emphasis on providing students with a platform to understand the values of inclusion through programs and discussions about the impacts of hate language and actions,” Hynes wrote.

The Port Washington Police District said in a statement Monday afternoon that it is seeking the public’s assistance in identifying the perpetrator, and that it is working with the Nassau County Police Department, the Nassau County district attorney’s office’s Hate Crimes Unit and school officials.

“Once the Port Washington Police concludes its investigation, we will update the community on its findings,” Hynes wrote.

Board of Education President Norah Johnson called the “antisemitic” vandalism “a deplorable act that cannot and will not be tolerated by the Port Washington School District” in a statement on the board’s behalf.

As Board members and as Port Washington residents, we are both saddened and angered at this act of hatred against a specific segment of our community. From the moment we learned about this horrific criminal act, our administrators notified law enforcement and have been working with both the Port Washington and Nassau County police departments to bring the perpetrator to justice,” Johnson said.

Officials from the Town of North Hempstead, including Supervisor Judi Bosworth and Councilwoman Mariann Dalimonte, condemned the acts in statements.

“The rise of hate crimes throughout the country is extremely upsetting, and it becomes even more upsetting when something offensive like this occurs in our own backyard,” Bosworth said. “It is essential that all community leaders denounce these types of evil acts with displays of strength, unity, and advocacy for all individuals regardless of their race, gender, and religious beliefs. Standing together as a community, we must continue sending a powerful message that we will not tolerate messages of hate in North Hempstead.”

“I am heartbroken, yet again, that a place where our children learn and play has been vandalized with an antisemitic symbol and one that promotes hatred and intolerance,” Dalimonte said. “Port Washington is a wonderfully diverse, yet tightknit community, that I am extremely proud of. But things like this really hurt my pride. For many people in our community, it also causes real pain and anxiety. I hope that the person or people who did this are caught and prosecuted to the fullest extent of the law. I have zero tolerance for intolerance.”

State Sen. Anna Kaplan (D-Great Neck) said that she was “outraged and disgusted” by the act in a statement, and offered her office’s full support in finding the perpetrators.

“Hatred and anti-Semitism will never be welcome in our community, and it is incumbent on us all to speak out forcefully and unequivocally against it whenever we encounter it,” Kaplan said.

The Holocaust Memorial and Tolerance Center echoed the sentiment in a statement and  emphasized a need to educate adults and young people on the Holocaust.

“Nazi symbolism and any other indicators of hate have no place on Long Island or anywhere in the world,” the center said in a statement. “Those who are responsible must be caught and be held accountable.”

The incident marks the second time in a year where vandals have spray-painted swastikas on a Port Washington building.

Vandals spray-painted a dozen of the Nazi symbols on the inside and outside of the Port Washington Police Athletic League clubhouse in October.

“We must speak out and reject all forms of hate at every opportunity,” the organization said on its Instagram story. “We stand with the Port School District. Education is necessary at every age.”

“What this incident – this act of hatred and discrimination reminds us – is that there is still a great deal of work we need to do to create an accepting and inclusive community and world,” Johnson said. “In our district, we are committed to creating and fostering an inclusive environment where our students are encouraged to treat all people with kindness and respect. We have a zero tolerance policy for hate speech of any kind and place a strong emphasis on our efforts to provide our students with the information they need to understand the values of inclusion and the negative, consequential impacts of hateful language and actions.” 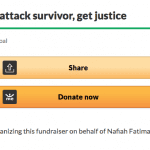