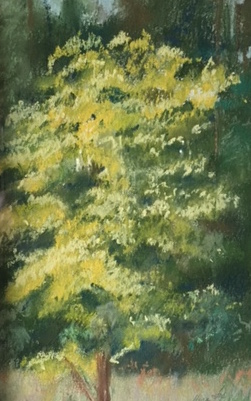 A painting by longtime Roslyn resident Myra Fox, who will hold an exhibition on March 12

Myra Fox cannot speak or walk. Terminal brain cancer, diagnosed in December 2015, has rendered her unable to lift a paintbrush she used with dexterity for decades. Nevertheless, Fox has vowed to hold and attend an exhibition of her life’s paintings that will take place at the Roslyn Village Gallery in March.

“It will be very emotional,” said Stewart Fox, her husband. “She’ll be ecstatic looking at giant 60-foot walls with her work on it.”

“Local artists know her,” said Marsha Tarlow, the owner of the Roslyn Village Gallery. “Everyone who has painted with her has said wonderful things about her.”

While living in Roslyn, Myra Fox took painting lessons with Steve Lampasona at the Nassau County Museum of Art, and she worked as a framer at the Robley Gallery on Old Northern Boulevard.

Her interest in art took her abroad as well.

“She enjoyed traveling and painting,” Stewart Fox said. “She would travel with an art teacher and groups and go to Italy for a week, or Prague. They’d paint all day and in the evening they’d discuss each other’s paintings.”

Over the years Myra Fox composed scores of works, occasionally participating in exhibitions that showed four or five of them, Stewart Fox said.

“She has sold but not on a regular basis,” Tarlow said.

A year and a half ago, Myra and Stewart Fox moved upstate to Saugerties.

Just a few months later, Stewart Fox, a physician, took her to the hospital for a CAT scan hours after she had difficulty completing her sentences. Doctors discovered a malignant tumor on Myra Fox’s brain.

After an initial surgery, she underwent chemotherapy.

“Initially she was doing art,” Stewart Fox said. “But not for very long because she slowly was developing weakness in her arms and legs from radiation and chemotherapy.”

Though debilitated, she had full functioning of her body until last September, when a blood-related medical emergency, akin to a stroke, left her paralyzed on the right side of her body and unable to speak.

Stewart Fox said she can understand speech but has difficulty expressing a response.

“It must be very frustrating for her,” he said. “We deal with it each day. She seems to be in pretty good spirits about the whole thing, considering what’s going on. If you tell a joke, she laughs it. If something angers her, she grimaces.”

A month ago, Tarlow, who herself suffers from multiple sclerosis, heard about Myra Fox’s illness and decided to hold an exhibition of her work.

“I felt what a horrible story and a terrible thing,” Tarlow said. “I thought, ‘Why don’t we ask her if she would like to have a show?’”

“She was bright eyed about it and she smiled,” he said. “She liked the idea.”

They determined the show would be a fundraiser for the Brain Tumor Center at Columbia University Medical Center, which provided care for Myra Fox.

A week later, Tarlow visited Stewart and Myra Fox in Saugerties to solidify the plans.

“I wanted to see her work firsthand,” Tarlow said. “It’s a tremendous body of work. It was very heart warming to meet her, and I left with a lot of sadness for her situation. I felt the gift is in the giving. She’s able to give back with this show by raising money for research.”

The month-long exhibition will be the first held at the Roslyn Village Gallery’s new, larger space on Old Northern Boulevard. A reception to celebrate the opening will take place on March 12 “from noon to whenever,” Tarlow said.

Fifty or sixty of Myra Fox’s paintings will hang on the gallery walls.

“The legacy here is that artists know her and knew her over the years,” Stewart Fox said. “Now they get to see work. I’m hoping a lot of them will buy a painting and have her work.”

“I told her, ‘In the future wouldn’t it be nice to know 50 people out there who still have a Myra on their wall and remember you by every day they look up and see your paintings? Otherwise, what’s going to happen? I’m going to have 80 paintings in my house. I don’t need any of them to remember you.’”