A quick look at what’s happening this week on Long Island.

1) A Spring Fling with Pink Martini

Where: Landmark On Main Street

Bestselling author and Washington Post columnist David Ignatius presents “How To Fix The World: A Foreign Policy For The Future” Sunday at Temple Emanuel. Ignatius has covered nearly every Washington beat, from the Pentagon to the CIA to Capitol Hill as well as global politics, the Middle East, and economics. He turned his experiences with the CIA into nine thrilling bestsellers.

Before Howie Mandel became Hollywood’s go-to TV host, he carved a career as one of North America’s sharpest comic presences. Whether he was wrapping a latex glove around his head and inflating it with his nose or honing the high-pitched voice that would give life to the titular character of Bobby’s World and Gizmo from Gremlins, Mandel’s standup act made even the most stoic viewers crack into laughter.

Powerful, emotive and critically acclaimed traditional Irish music band from the west of Ireland and Scotland. Fronted by Ireland’s piano accordion maestro, The Alan Kelly Gang has firmly established itself as one of Ireland’s leading contemporary traditional music groups. Its strong dynamics, driving rhythms and buoyant harmonies will draw even the most fainthearted listener into the passion that they put into the music they play.

The Jerusalem Symphony Orchestra, under the guidance of conductor Dmitry Yablonsky and featuring renowned cellist prodigy Danielle Akta, will play a selection of classical standards when they take the stage Sunday at the Tilles Center, including Glinka: Ruslan and Ludmila Overture; Saint-Saens: Cello Concerto No. 1 in A minor; and Brahms Symphony No. 2. Single ticket prices are $103, $78 and $53.

Where: Tilles Center for the Performing Arts

The man behind such hits as “You Took the Words Right out of My Mouth,” “Bat Out of Hell,” “I’ll Do Anything For Love” and the ubiquitous “Paradise By The Dashboard Light” will return to Long Island this week. Born Marvin Lee Aday in Dallas, TX, Meatloaf also has a host of acting roles on his resumé, including starring as Eddie in the cult classic “The Rocky Horror Picture Show” and as doomed Robert Paulson in “Fight Club.”

Quinn has navigated his career from MTV’s “Remote Control” to SNL to Comedy Central’s “Tough Crowd” to Broadway with one-man shows “An Irish Wake” and “Long Story Short.” He’s been off Broadway as well with his shows “Unconstitutional” and “New York Story.” His web series “Cop Show” can be seen on LSTUDIO.com, his first and last book, “The Coloring Book,” is now out and he recently starred as Amy Schumer’s father in the film “Trainwreck.” 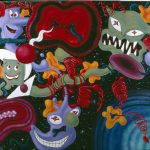 Street art on display at NCMA
Next Article

The top events for kids for the coming week