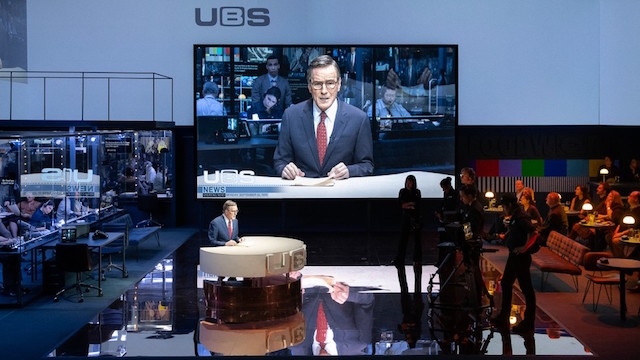 In arguably one of the most iconic scenes in movie history, actor Peter Finch as newscaster Howard Beale in “Network” yells “I’m mad as hell and I can’t take it anymore” and exhorts his viewers to do the same. I’m happy to report the same scene in the recent play “Network” directed by Ivo van Hove is equally as powerful. Giving a superb performance, Bryan Cranston plays the disillusioned Beale and surely will be nominated for a Tony.

The drama begins with Beale given two weeks notice by the network news head and best friend Max Shumacher (Tony Goldwyn). Frustrated and despondent, the news anchor advises the audience of his intentions to kill himself on national TV. Not surprisingly, ratings spike and an ambitious network executive Diana Christensen, played by Tatiana Maslany, capitalizes on it.

Beale is losing faith in the country and possibly his sanity. When he urges viewers to follow his lead by opening their windows and shouting out, he reminds them that he doesn’t have any answers. He says not to protest or march or call. Not yet. Ratings continue to soar as he becomes more and more mentally unstable but when he begins to sabotage a buy-out deal of the network, the corporate attitude starts to change.

Cranston evokes the persona of a credible newsman in the style of venerated journalists like Walter Cronkite and Edward R. Murrow. They were the trusted faces of news. As the “TV prophet,” even when delusional and addressing some otherworldly force, Cranston is sincere and believable. When he leaves the stage and sits in the audience he breaks the fourth wall, but never breaks character.

Cranston makes Beale an honest and trustworthy character, unlike Max who gets so caught up in his affair with Diana that he leaves his wife for her. Goldwyn gives a flat performance, delivering the words but not the emotions. However, Diana is all passion and naked ambition, so much so that talking about business arouses her. She and Max perform a very realistic sex scene done on stage at a table right next to audience members. She’s a character who is easy to dislike which means that Maslany does her job well. The affair between Schumacher and Diana goes on too long and detracts from the humanity of Beale’s story.

The setting at The Belasco Theater is a television newsroom, complete with camera and sound and broadcasting equipment. Although creative, it becomes annoying because the camera people often block the actors, creating a need for large screens flanking the stage. Big arenas commonly use screens to allow people far away to see; however, “Network” isn’t a rock concert and people who paid to sit in the third row shouldn’t have to watch the screens.

With amidst chants of ‘fake news,’ celebrities and ratings have taken the place of truth and objectivity. Sadly, Beale is a relic, totally out of place and for that reason “Network” should feel dated, but it doesn’t. What does still exist, sadly, is the rage that people feel, anger at the economy, the dysfunctional government and the chaotic world. Most importantly, what makes “Network” so universal is the helplessness that Beale personified.

Set in the 1970s, the play refers to real-life political events, so I asked my colleague if he thought “Network” should have been updated to reflect the current world situation. He noted wisely that most people don’t get their news from TV anymore. Yet Beale’s words still ring true. In fact, a variation may even be on the posters some of us carry at the next Women’s March in January. “We’re mad as hell and we won’t take it anymore.” 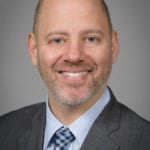 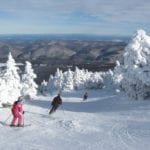 Going places: Skiers converge on Vermont to experience ‘Winter in its Original State’