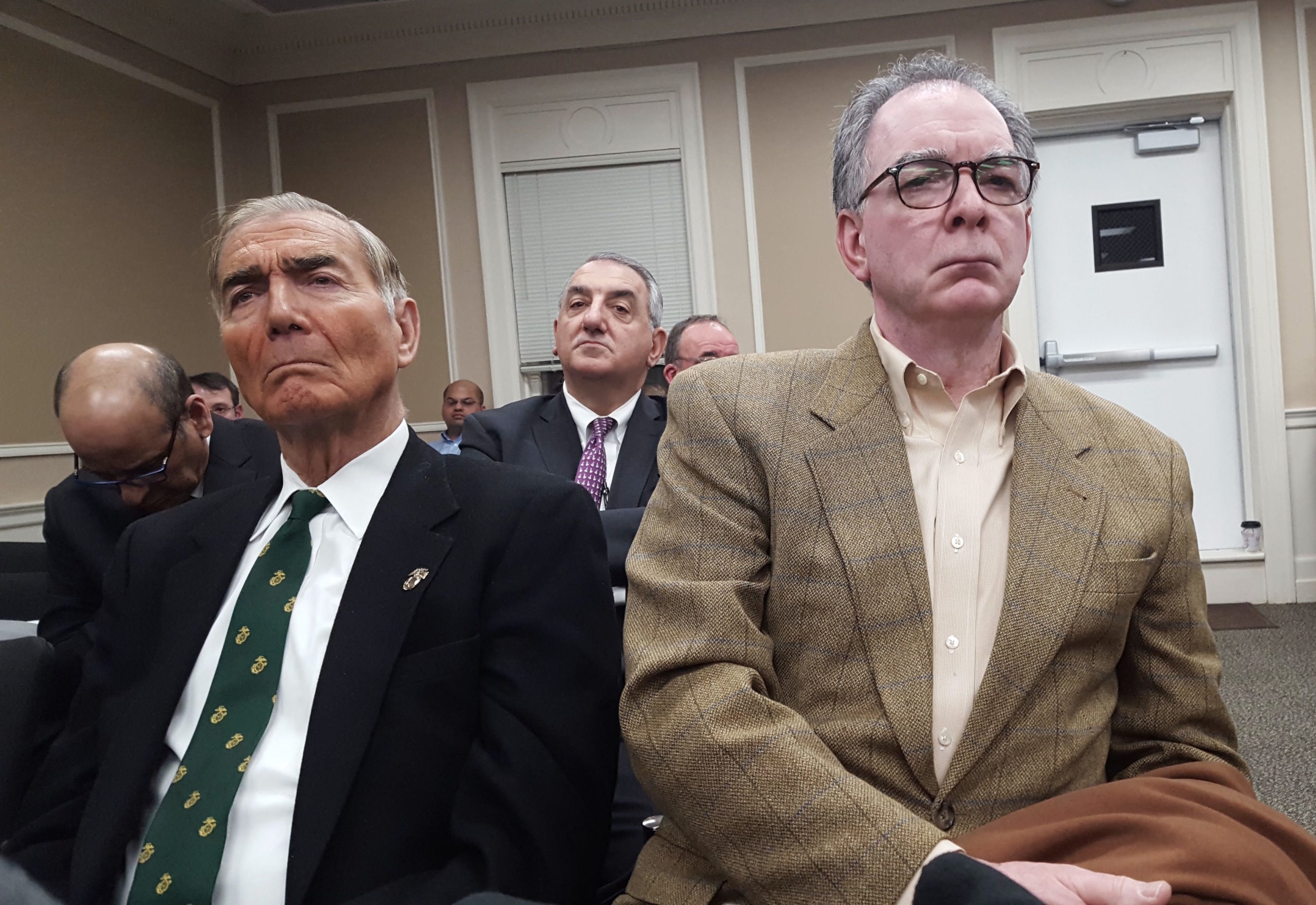 Drs. Robert Waldbaum, left, and John Procaccino work at North Shore University Hospital and spoke at the town’s public hearing Thursday, urging the board to approve plans for a new surgical pavilion for site plan review. (Photo by Teri West)

The Town of North Hempstead board unanimously approved Northwell Health’s proposed surgical pavilion for the North Shore University Hospital campus in Manhasset last Thursday, giving the health network the go-ahead to proceed to the Building Department to apply for permits.

The decision comes in the midst of a lawsuit in which Greentree Foundation is suing the town and its Board of Zoning Appeals over the project.

Northwell’s eight-floor pavilion would be visible from Greentree’s 409-acre property, originally owned by the Whitney family, that is next to the hospital campus.

The surgical pavilion would include intensive care units and operating rooms for procedures, such as bone marrow and liver transplants. It would be accompanied by a parking facility.

The lawsuit appeals the Board of Zoning Appeals’ decisions to approve variances for the pavilion and conclude that the structure would not be a major detriment to the environment.

The existence of the lawsuit, however, barely came up in the Thursday evening hearing, though lawyers for both parties spoke to the board.

Instead, the evening centered on the project’s architect explaining the logistics of the new space and Northwell doctors urging the town board to approve the project to allow the hospital to accommodate its growing population of patients.

“We are absolutely stuffed to the gills,” said Dr. Raj Narayan, the hospital’s chairman of neurosurgery. “There is no room on many nights, and we absolutely need to correct this and correct it soon because our population is growing and the number of people who seek our help continues to grow.”

Many of the speakers had worked at the hospital for decades and said that they had seen it grow from a small community hospital to an expansive, cutting-edge facility.

While the hospital’s service has been modernized and taken in more patients, the space itself has not kept up, they said.

“I work in an operating room filled with amazing staff,” said the hospital’s chief of colorectal surgery, Dr. John Procaccino. “I work in a shoebox.”

Doctors at the hospital have contributed to the plans for the new pavilion to ensure that the new intensive care units and operating rooms will support their needs, said Northwell’s lawyer for the project, Michael Sahn.

He said the town board’s decision to approve the project is most exciting for the Northwell doctors and community members who will benefit.

The ongoing Article 78 proceeding that Greentree filed Jan. 23 has the potential, however, to overturn the town’s Board of Zoning Appeals approval for the project.

“Whenever you have litigation you can never predict the outcome and I don’t think it’s appropriate to comment on the case, but we’re very pleased with what has happened so far with the town and we’re optimistic that Northwell will be able to build the facility and provide the care for everybody,” Sahn said Friday.

The size of the pavilion has decreased slightly since the version of the plans that the Board of Zoning Appeals approved in December, Sahn said. A buffer zone with foliage between the Northwell and Greentree properties also expanded from 5 feet to between 14 and 16 feet, Pecora said.

Greentree’s lawyer, Jeffrey Forchelli, spoke during the town hearing and said Greentree did not have an issue with Northwell pursuing its mission to serve the community but is opposed to this particular building.

He said the zoning board approved a 259,000-square-foot building, which does not include the parking garage and that Northwell should either reduce the size of the pavilion or relocate the parking.

The parking garage was always considered a separate entity and was accounted for in Northwell’s document submissions, which is why it is not part of the building’s square footage, said architect Andrew Pecora after the meeting.

“Technically it’s exterior space and it’s going to be naturally ventilated, so it’s not interior building,” he said. “Even though we put an aesthetic screen around the outside of it, the aesthetic screen is really to hide it from the neighbors and hide it from the public, but at the end of the day it’s still open air and isn’t in that square footage because of that.”

Greentree was never aware of the size of the garage – 31,000 square feet – until it was published in the notice about last Thursday’s hearing, Forchelli said in an interview.

“We were opposed to the height, the whole size of the building, and they were telling us it was 266,000 square feet and they reduced it to 259,000, but when we really researched it after they came out with the notice…we realized it is even bigger,” he said. “Maybe a 259,000-square-foot building would be OK, but we don’t really know because the building they have is much bigger than that.”

With the town board’s approval for site plan review of the facility, Northwell may now approach the town’s building department for permits. It does not need to return to the town board for approval of permits it obtains.

The Building Department originally declined to approve the project in July 2017, requiring Northwell to take the plans to the five-member Board of Zoning Appeals to receive variances.

It again disapproved the project in June 2018. Northwell then reduced the height of the project slightly.

On Dec. 28, the Board of Zoning Appeals approved the project variances, which allow for the pavilion to be closer to Community Drive and Northwell’s property line than town zoning law would typically permit, non-employee parking spaces to be slightly smaller than standard, the parking area to have an additional level without surrounding landscaping because it would be connected to another building, and overall 673 fewer parking spaces than required.

In its Dec. 28 decision, the board also concluded that the structure “will not result in any significant adverse environmental impacts” based on an assessment conducted by an outside party in 2017. 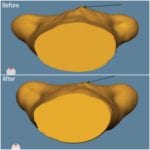 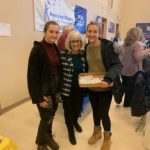