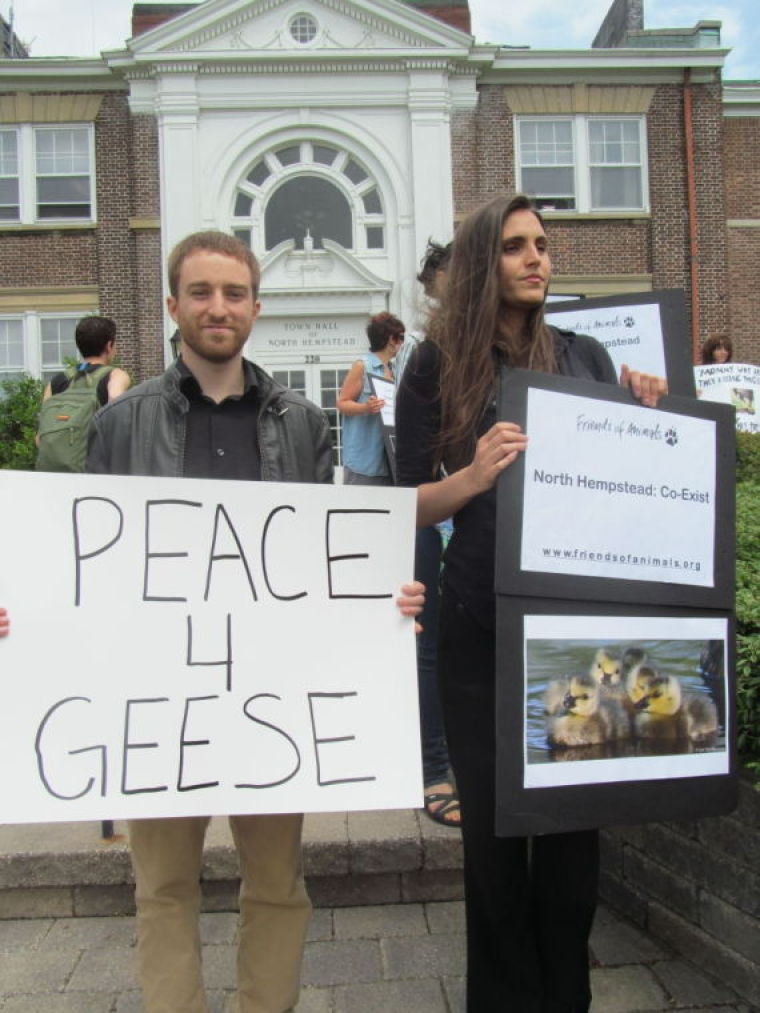 Canada geese activists said they received a verbal commitment from Town of North Hempstead Supervisor Jon Kaiman last Thursday morning that the town would not euthanize geese in town parks.

But that didn’t stop the activists from staging a protest against the town’s geese-killing plan outside Town Hall in Manhasset later that afternoon.

Edita Birnkrant, New York director of Friends of Animals, said the protest continued because the group had yet to receive a written commitment from Kaiman.

“We want to make sure Supervisor Kaiman goes ahead and cancels plans to kill the geese this year,” Birnkrant said.

Birkrant also acknowledged that the protest’s logistics also played a role in continuing with the protest.

The 2 p.m. protest was scheduled “too soon to call it off,” following the meeting with Kaiman, she said.

Birnkrant said she and other activists met with Kaiman on Thursday morning.

“The point of our meeting was to get an official statement from Mr. Kaiman the ‘kill’ option is off the table,” Birnkant said, “We’re very happy that Mr. Kaiman is willing to work with us.”

Approximately 30 activists stood on the lawn in front of Town Hall holding signs with pro-geese slogans – including signs exhorting motorists to honk in support of their cause, which some passing motorists did.

Town of North Hempstead spokesman Justin Meyers confirmed the geese activists had met with Kaiman early Thursday. He issued a statement indicating the supervisor was reconsidering plans to reduce the town’s geese population.

“The town’s goal is to reduce the overwhelming amount of goose droppings in our fields and parks. We are presently exploring alternative options to the culling of geese and remain open to suggestions that can achieve our goal of maintaining a healthy and safe environment in our parks,” Meyers said in the statement.

The statement and the protest followed an informal hearing about the town’s plan to euthanize geese at the town board meeting on May 14 where many town residents and animal rights activists expressed opposition to the plan.

The town board unanimously approved a contract with the U.S. Department of Agriculture’s Animal and Plant Health Inspection Service Wildlife Services last month for the USDA unit to survey the geese and eliminate some of the estimated 600 geese currently inhabiting town parks.

The USDA’s preferred method of euthanasia is carbon dioxide poisoning, according to activists who consider the method inhumane. The town would pay the federal agency $8,603 for the service plus an extra $6 per goose for processing meat to be donated to food pantries.

Birkrant said the pro-geese activists intend to stay focused on the issue beyond this year.

“The goal is not just this year, but a long-term solution so killing is no longer a solution in North Hempstead,” she said.

Birnkrant said the group suggested alternatives during the meeting to euthanizing the geese, including use of NatureSweep, commercial machines designed to pick up the geese droppings and turn them into manure.

“The main issue was the droppings. They were getting complaints from residents,” she said.

Birnkrant said she thinks Kaiman was surprised at the number of town residents who expressed opposition to euthanizing at the town board meeting.

“I think he realizes that killing the geese is dead,” Birnkrant said.

John Di Leonardo, president of Long Island Orchestrating for Nature who also attended the meeting, said Kaiman was receptive to Di Leonardo’s offer to muster volunteers from his organization to help clean the parks in what he described as an “adopt-a-goose” plan.

Di Leonardo said Long Island Orchestrating for Nature has approximately 500 activists who follow the organization’s initiatives on its Facebook page and come out to events, including the protest at Town Hall.

Williston Park fifth grader Avery Scott, who had started a petition among his neighbors to save the geese, and his mother Lauren were among the protestors on Thursday.

“I find it inhumane that they’re going to gas the geese to death,” Scott said.

The town formerly had a deal in place with GeesePeace, an organization which treats eggs and alters habitats to discourage geese from settling in them.

Touch of WP brought to Old Westbury
Next Article 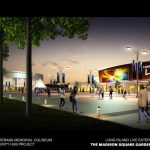 A ‘world-class building’ for LI