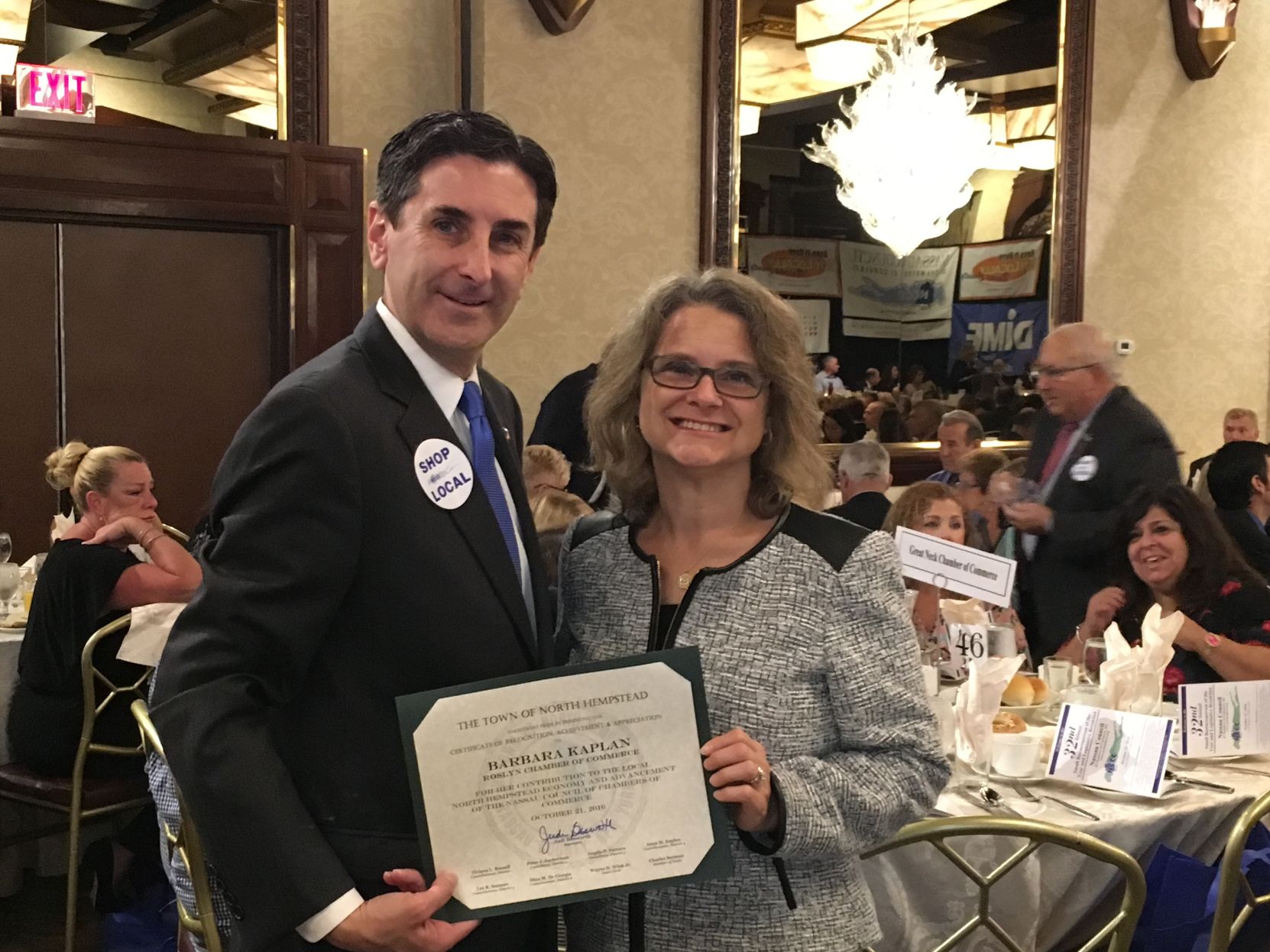 A member of the Roslyn Chamber of Commerce since 2010, local business owner Barbara Kaplan said she enjoys every opportunity to cheer on her peers. “But when I’m acknowledged, I get overwhelmed,” she said.

Friday morning was a nerve-racking one, she said, as Kaplan received the Small Businessperson of the Year award from the Nassau Council of Chambers of Commerce, which recognized her work as president of a business expo company called Specialty Connections.

“I was very proud and touched,” she said of receiving the honor.

Six years ago, Kaplan helped a friend organize a business expo. Before that she had worked as a math tutor, a full-time mother, a quality assurance assistant at a software company and an employee at Citibank. “I didn’t know what to do with myself,” she said. “My husband said, ‘You should run an expo.’ I said, ‘How do I do that?’ He said, ‘What do you think you just did?”’

Kaplan ran her first expo on her own in September 2010 with an Over 50 Fair at the Melville Marriott that assembled businesses and nonprofit groups that serve the elderly on Long Island.

“I play a weekly mahjong game with women much older than I am,” she said. “They were my inspiration. They play bridge, they go out to dinner, they go to New York City. I had a eureka moment that they should be the audience.”

The following April, Kaplan held her first All Kids Fair,  targeting those at the other end of the age spectrum. “We started connecting kids and their families with opportunities they wouldn’t otherwise be aware of,” she said.

After holding both of those events on an annual basis for a few years, Kaplan founded Specialty Connections in 2014. She has coordinated additional events each year since, including 23 so far in 2016. Kaplan charges both vendors and attendees for entrance to the Over 50 Fair and the All Kids Fair, but she does not charge attendees for her other events.

Kaplan joined the Roslyn Chamber of Commerce in 2010 after attending a meeting where “people were warm and friendly.” Most of her events are held in Suffolk County, but she’s glad to meet other business owners in Roslyn, where she has lived for 11 years. In 2013, she combined her professional and civic lives by organizing a Roslyn-focused healthy living expo at the Harbor Hill Elementary School.

This is her fourth year serving on the board of the Roslyn Chamber of Commerce. Her advertising representative at Newsday, Vito DiTrapani, is board president. “I’m officially assistant vice president of events, but they’ve renamed me Vito’s chief of staff,” she joked.

In her free time, Kaplan enjoys exercising, spending time with her family, reading and playing mahjong. She has played a weekly game with the same group of women for the past eight years.

Despite the rise of Internet advertising and networking, Kaplan values face-to-face communication above all else. “I don’t think anything replaces in-person communication,” she said. “You can watch all the TED talks you want, but there’s nothing like seeing a lecture in real life and asking questions afterward. If you need someone to do something as personal as your finances, you’re going to do it by referral or you’re going to go to someone you come across at an expo.”

She added, “Maybe Skype will change that but probably not.”