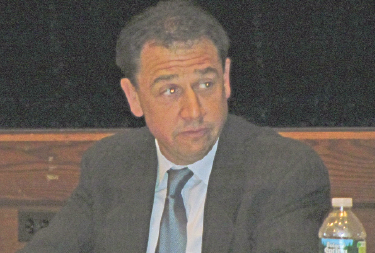 The East Williston school board came under fire last Wednesday for enforcing a rule that’s not on the books.

The board has said it only allows district residents to speak during the public comment portions of its meetings, but the written policy on its website includes no such requirement.

“Why did you claim that it is this board’s policy when clearly it’s not? This is the board policy straight from your website,”  Jesse Manor, a 2011 Wheatley School graduate, said at Wednesday’s school board meeting.

The board’s stated rule kept several people — including a retired Wheatley teacher — from speaking at the June 20 board meeting, where about 50 supporters of suspended teacher Matthew Haig criticized the board’s May 23 vote to bring disciplinary charges against him.

Mark Kamberg, the school board president, has said the board welcomes comments from district residents because its discussions and actions affect them directly.

But its written policy, last revised in 2009, only regulates the behavior of “speakers” at meetings.

The only mention of “district residents” says the board will note unanswered questions from residents and provide answers later.

The board does not have to allow public comment under the state Open Meetings Law, but should not restrict speaking privileges based on residency if it does, said Robert Freeman, executive director of the state’s Committee on Open Government. All citizens are entitled to speaking rights, and nonresidents might include people who live elsewhere but own businesses in the district, he said.

“You could be from Williston Park or East Williston, wherever it may be, or Timbuktu, and it wouldn’t make any difference,” Freeman said.

The policy also asks speakers to identify themselves by name at meetings, which Freeman said cannot be required under the Open Meetings Law.

A written policy saying only residents can speak would be “unreasonable” and could be challenged in court, Freeman said, but the board should put one on the books if that’s the tack it wants to take.

“How do people know which rules to follow unless they know what the rules are?” he said.

The school board’s attorney, John Sheahan, should have known the board’s spoken policy went against the Committee on Open Government’s advice, Manor said, quoting Freeman’s written opinions on the subject.

Kamberg asked Manor to share Freeman’s opinions with Sheahan and said the lawyer would review them and advise the board what it should do.

The policy might have been amended to include the residency requirement but not updated online to reflect that, he said.

“It has to appear somewhere, so I’ll have counsel figure that out,” Kamberg said.