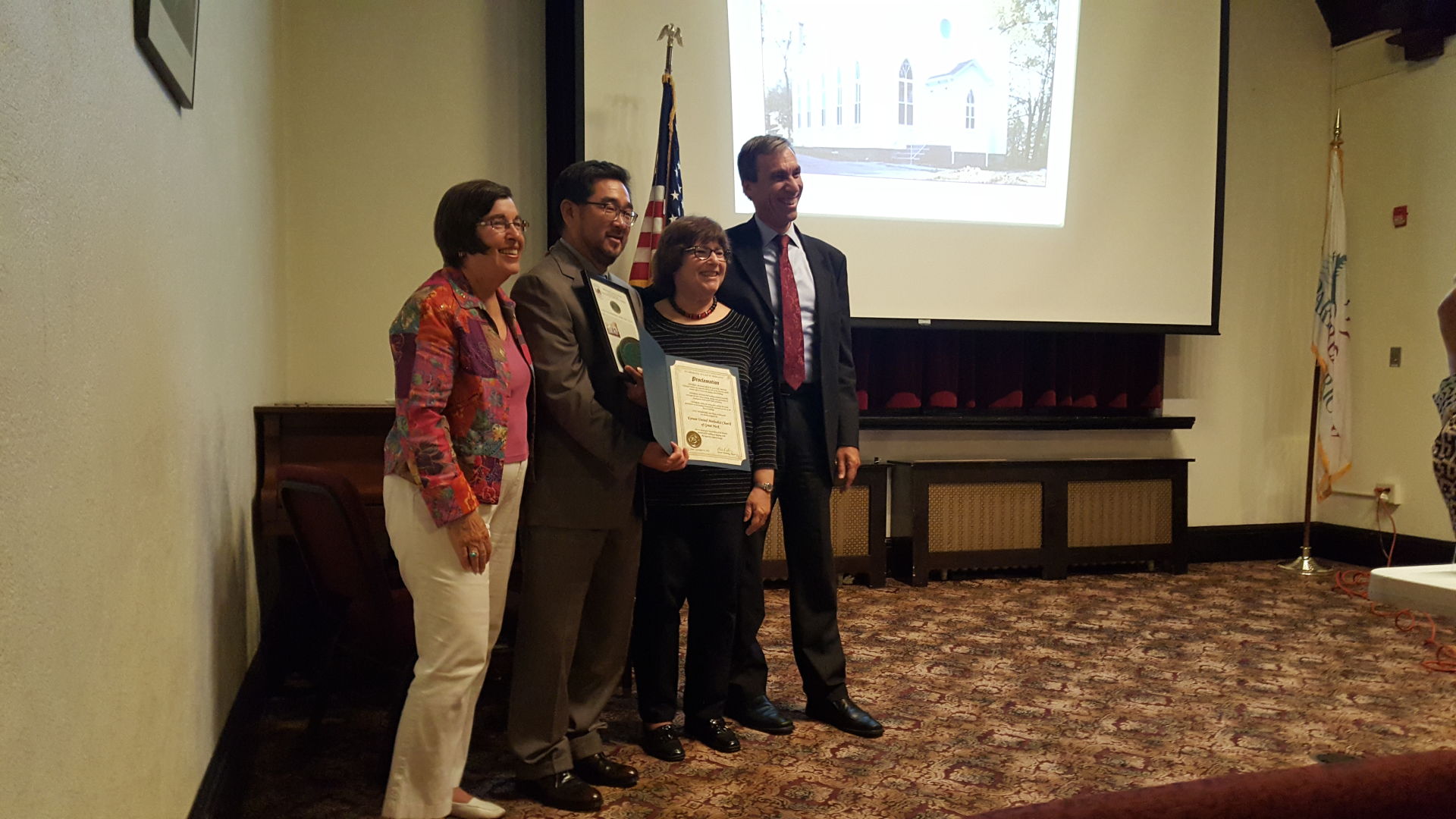 The Korean United Methodist Church, which was built in 1881, was in a dire state and needed to be restored, the church’s renovation committee head, Paul Choi, said.
So congregants got together, he said, and raised the funds to complete the restoration.
“For us to continue to use it, we actually had to do something about it,” he said at Wednesday’s Great Neck Historical Society presentation on historic buildings in Great Neck.
For its efforts, the historical society presented the church with its second “Outstanding Restoration Award.”
The church, which is located in the Village of Thomaston at 715 Northern Blvd., was built by a Great Neck resident, Joseph Spinney, who had an estimated $3 million fortune, most of which he earned by building railroads in Peru, said Joan Wheeler, chairwoman of the Historic Recognition Committee.
The building served as a Sunday school adjacent to the Great Neck Methodist Episcopal Church,  which was constructed nine years earlier in 1872, Wheeler said.
She said that every Christmas, Spinney delivered presents to students at the Sunday school and left $3,000 in his will for it.
The church burned down in 1948, but the Sunday school remained unharmed, Wheeler said.
In 2012, she said, members of the church were “inspired” and began the restoration process.
“Today, thanks to the careful, sensitive restoration by the Korean congregation, this historic building has been restored to excellent condition and all updates duplicate the exquisite original design,” Wheeler said.
Choi said the restoration process began as far back as 20 years ago.
He said the church’s restoration was fully funded by congregant
fundraising.
His mother, Grace Choi, who was at the presentation and is one of the church’s original 20 members, held an art exhibit about seven years ago and sold some of her paintings for over $10,000 and donated all of it for the church’s restoration.
Choi said he and church congregants were “honored” by the historical society’s recognition.
“The most important thing for us to be here and be a part of this is to be a good neighbor,” he said. “I think we are all here together and we appreciate your love and we hope to reciprocate at the same level.”
Choi said next month the church will be celebrating its 39th year in the community.
While the church could have been renovated to change its appearance, Thomaston Mayor Steven Weinberg commended Choi and the congregation for restoring it “in the way that you did” and that they “did it for the community.”
“I personally, and my residents who comment to me as they enter the village, are struck by the beauty of the Sunday school that you have restored,” Weinberg said. “I am in awe and appreciation of the blood, the sweat and the financial investment and personal commitment that you made to keep this history alive.”
He presented Choi with a proclamation from the village in honor of the church’s restoration.
Wednesday’s presentation also described the history of other notable historic buildings in Great Neck, including St. Aloysius Church, the Village School, Great Neck North High School, Great Neck House, Great Neck Estates Village Hall, Kensington Village Hall and several other residential homes and apartment buildings.
Alice Kasten, president of the historical society, commended the efforts of the homeowners, some of whom were at the presentation, to restore their homes and maintain the character of the community.
“I just think it’s so wonderful that there are so many people out there who really care about the history of their building and go through these efforts,” Kasten said.