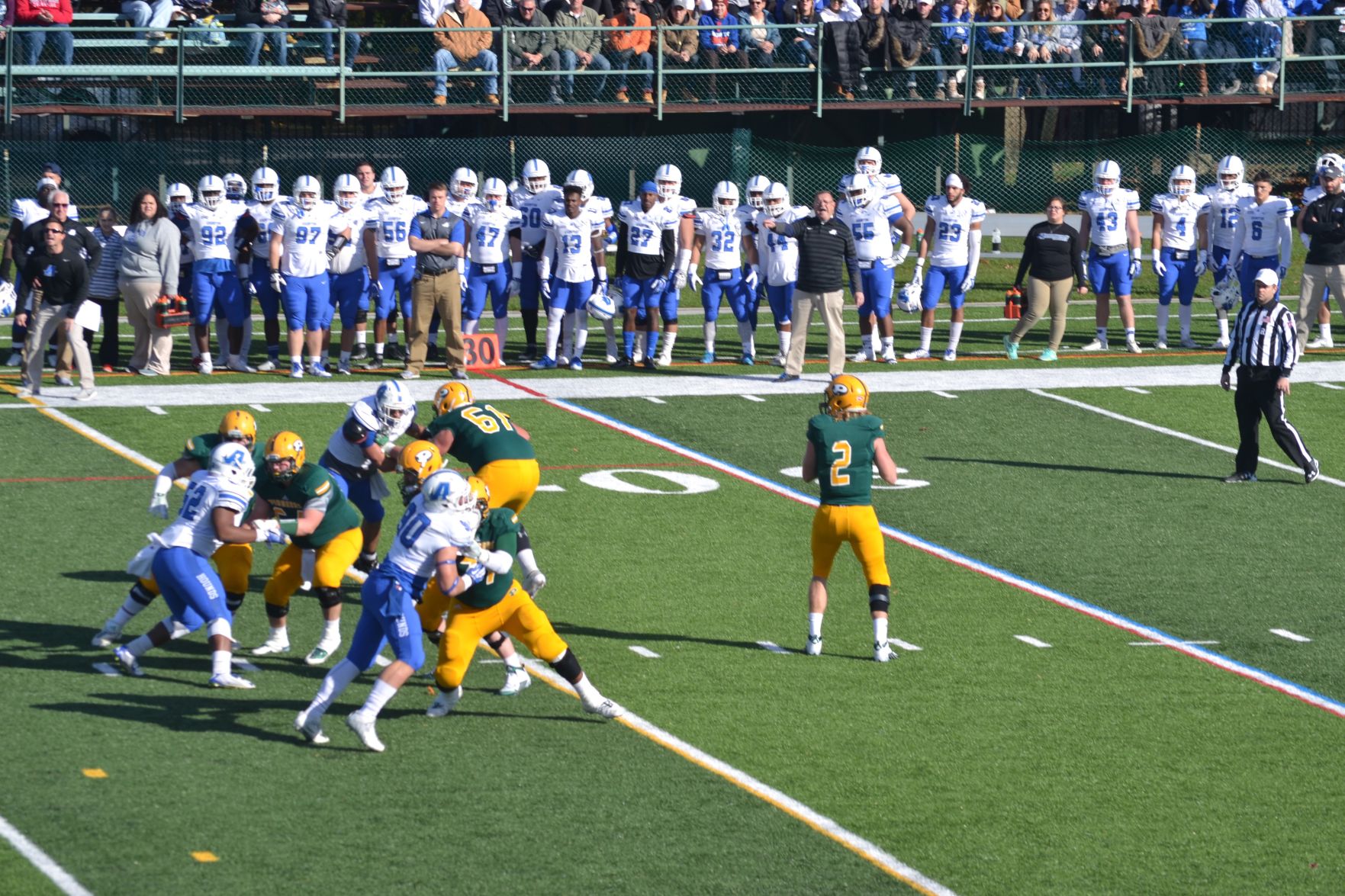 Led by red-shirt sophomore running back Malik Pierre, who ran for 115 yards and three touchdowns, the No. 10 ranked and second-seeded LIU  Post football team defeated seventh-seeded Winston-Salem State University, 48-41, in the first round of the NCAA Division II tournament on Saturday, Nov. 19, at Bethpage Federal Credit Union Stadium in Brookville.
“He is an all-around great player,” head LIU Post football coach Bryan Collins said about Pierre. “He has a real nose for the end zone. We can get him the ball as a running back or as a slot receiver to work the matchups. He’s a weapon for us.”
With the win, the Pioneers improved to a perfect 12-0 season, winning an NCAA tournament game for the first time since 2005. The team also set a program record for the most wins in a single season.
After a deadlock at 14 after 15 minutes, the Pioneer offense exploded for 20 unanswered points to take a 34-14 lead. In that span, Pierre ran for two of his three touchdowns and senior quarterback Jeff Kidd tossed a 34-yard pass to junior receiver James Higgins, who crossed the goal line to end the half with a lead of 34-17 for the Pioneers.
The Pioneers dominated the third quarter, as they added two more touchdowns; an 11-yard pass from Kidd to senior halfback David White and Pierre’s third on the ground.
By the time Pierre made his third trip to the end zone, the Pioneers had a 48-24 lead with 1:08 left in the third quarter.
In that 16-plus-minute span, the Rams  scored 17 unanswered points and drew to 48-41, but could not climb out of the hole the Pioneers put them in.
Although the Pioneer defense was not as dominant as against Assumption College a week prior, the team made big plays that changed the game to earn the win.
Perhaps the most important play of the game occurred on the last possession as the Pioneers moved the chains on a huge third down and seven to go, thanks to red-shirt receiver Shane Hubbard. Kidd and Hubbard connected for 31 yards and rushes by the Pierre-White combination put the game on ice.
Kidd went 25-34 through the air for 320 yards and four touchdowns. Kidd connected with seven receivers. Kidd’s most frequent recipient, Hubbard, hauled in six catches for 81 yards and a touchdown, while Kyle Ward brought in five balls for 72 yards and a score as well.
On the ground, Pierre’s three touchdowns stole the show, but White ran for 134 yards on just 20 carries; adding to his terrific season.
Defensively, red-shirt junior defensive back Jared Chester and junior defensive back Richard Wright each made seven tackles to lead LIU Post and they each also intercepted a pass.
Senior linebacker Ryan Renfroe also contributed, totaling four tackles including a tackle for loss while fellow senior linebacker Nate Feliz added six tackles and a pass break-up of his own.
As a team, the Pioneers amassed 12 more first downs than the Rams, outgained them in rushing and passing yards and also forced more turnovers. In addition to those numbers, the Pioneers also held a 10 minute advantage in time of possession and went an impressive 5-5 on fourth downs.
The Pioneers advanced in the tournament and will  host  third-seeded Shepherd University in their second round matchup on Saturday, Nov. 26, in Brookville.
Shepherd University, like the Pioneers, has a perfect record at 11-0 and a potent offense; winning 70 points a month ago against West Virginia State.
They defeated Assumption College, a team the Pioneers handled twice this season, 48-31.
Game time has yet to be determined.
This article was originally published in the Pioneer, the award-winning student newspaper of LIU Post, www.liupostpioneer.com, and is republished here by Blank Slate Media with the permission of the Pioneer.