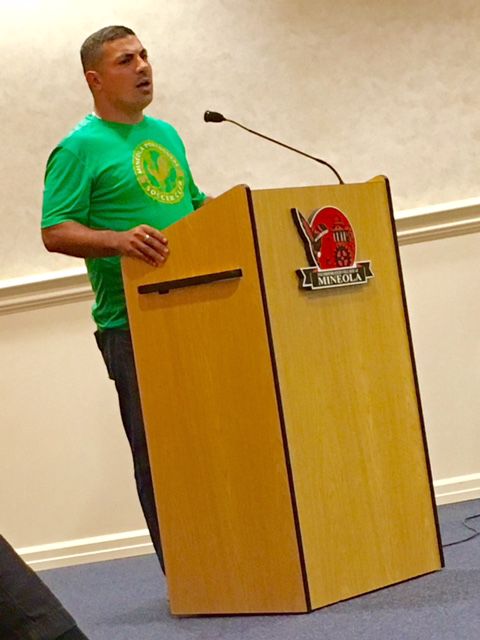 A plan for an indoor soccer stadium in Mineola has one local youth sports club feeling shut out.

Some parents and coaches in the Mineola Portuguese Soccer Club are disappointed village officials didn’t tell them about Regal Sporting Group’s $10 million proposal for the field at Wilson Park, and worry a new youth program might cut into their membership.

Village Mayor Scott Strauss asked the Mineola Athletic Association and the Mineola Police Athletic League for their thoughts before issuing a request for proposals for the field, he said.

But, Neves said, he never heard from the village.

Because it has trouble getting permits for Wilson Park, the club has to pay thousands of dollars a year to practice at Nassau County parks and doesn’t want to be shut out of the new field, Neves said.

Another elite youth soccer program such as FC Porto’s could also draw high-level players away from the Portuguese Soccer Club’s 17 teams, Neves said. The club has about 350 players and is affiliated with the New York Cosmos.

“We’ve struggled as a club, even in our own community, to be able to have access to the fields that we want to have, and while the project itself is a great one … if that’s to the exclusion of our club, then that puts us at a disadvantage,” said Russell Sargeant, a club parent.

The Portuguese Soccer Club has existed for 80 years and started a youth program five years ago. The club had a similar proposal for the field with funding from investors, Neves said, but never knew about the request for proposals the village issued in June.

Pilkington’s plan would build a new field marked for multiple sports, 1,500 square feet of retail and concession space and a 95-car parking lot. The facility would also be open to community groups for events.

The village is “at least a couple months” from finalizing a deal with Pilkington, Strauss said, and any of the Portuguese Soccer Club’s concerns can be addressed in the meantime. There was no intent to exclude the club from talks, he said.

Pilkington, a North Hills resident, said he wants to “actively engage community-based organizations” and would be glad to talk with the Portuguese Soccer Club about securing playing time for the field.

With 123,000 youth soccer players in eastern New York and a likely difference in cost between playing with the Portuguese Soccer Club and with FC Porto’s youth team, Pilkington said he doesn’t see “any potential bleed of players on a mass level.”

“We’re not here to take your players,” he said. “We’re here to give you an opportunity to play in a great facility, to give you an association with a professional brand that would give you curriculum and resources and support to your organization.”

Twelve entities, including the MAA and PAL, picked up the request for proposals from Village Hall, but Pilkington was the only one to submit a proposal, Village Clerk Joseph Scalero said.

The village is still weighing whether the project would be best for Mineola, Strauss said.

The MAA is doing the same and will soon be meeting with Pilkington to discuss how plan would impact its teams, league President Frank Pizzardi said.

“I need as many people as possible to have an understanding of what’s going to happen or possibly happen, and what we are looking to do, and I don’t want to hurt any of our village organizations,” Strauss said. “I want to make sure they’re all included.”