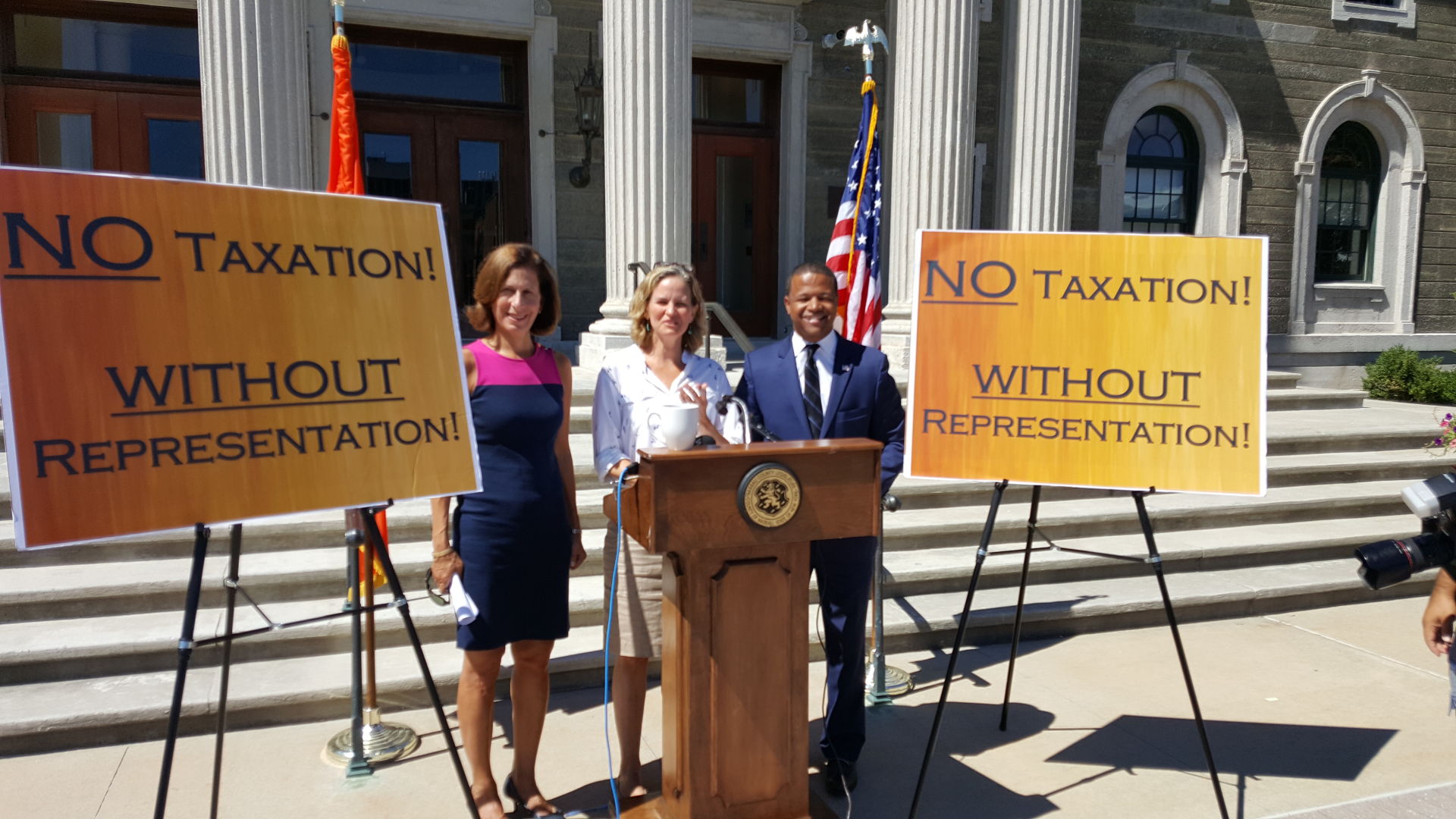 Nassau County Legislator Laura Curran (D-Baldwin) filed a bill Tuesday with the county clerk’s office that would require all 19 county legislators to vote on contracts exceeding $3 million.
Currently, the Legislature’s seven-member Rules Committee is the only panel required to vote on any contracts submitted to the county.
“This will give every legislator an opportunity to vet these same contracts, ask tough questions and vote,” Curran said. “And it will allow each legislator’s constituents more opportunity to hold them accountable and that will only make our government more transparent and more worthy of trust.”
Speaking in front of the Nassau County Executive and Legislative Building in Mineola, she said a $12 million county contract with Arizona-based AbTech Industries, which led to the conviction of former state Senate Majority Leader Dean Skelos and his son, Adam, on federal corruption charges, was one of the key moments that led to her filing this bill.
Legislator Carrié Solages (D-Valley Stream), who is a member of the Rules Committee and attended the press conference, said he was not given the “proper tools” to analyze the AbTech contract.
Solages also said that because the Rules Committee has a Republican majority, it is only four people voting on multimillion dollar contracts.
“Rather than having four sets of eyes on one contract, I’d rather have 19 sets of eyes on a contract,” he said. “We’re not asking for much but basic transparency.”
Legislator Ellen Birnbaum (D-Great Neck), who also attended the press conference, said legislators were frustrated that petitions filed to hold a public referendum for a county inspector general in November are “held up” in the county attorney’s office.
“When we’re talking about millions of dollars of contracts that are not overseen by an independent inspector general, we have to rely on testimony that appears before us,” Birnbaum said. “At this point, seven people are judging whether or not this is a good contract for Nassau County.”
Curran said that because only seven members of the Legislature vote on contracts, it leaves the approximately 840,000 county residents, who are represented by the other 12 legislators, with “zero say” in how their tax dollars are being spent.
“The legislators who represent these constituents cannot even ask on the record questions about the contracts,” she said.
The $3 million threshold was chosen, Curran said, because it represented a substantial amount of money for the county.
“If this again needs to be changed, then we will take it from there,” she said.
Curran also said that she expects the bill to receive support from Republican legislators, saying she “can’t see why they wouldn’t” support it.