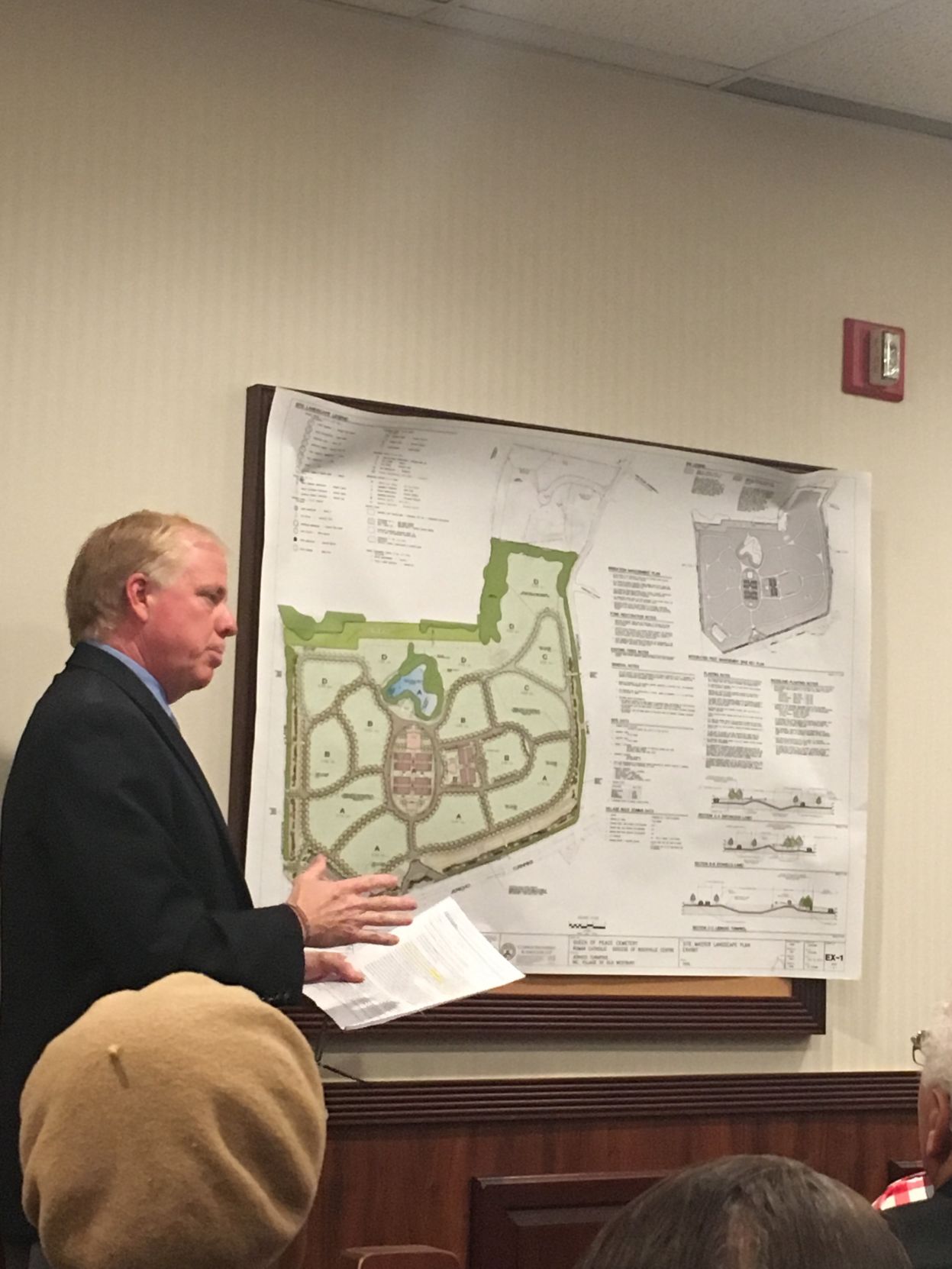 After hearing complaints from neighbors, Old Westbury trustees on Monday approved an amended plan by the Roman Catholic Diocese of Rockville Centre to develop a cemetery on a 97-acre property, resolving a  contentious 20-year-old issue.

The plan, which amends a 2010 approval granted by the village, was approved by  unanimous vote. Construction will begin after the end of year, an official of an engineering firm said.

The property is located at Jericho Turnpike, east of Hitchcock Lane and west of Powells Lane.

In March 1995, the diocese purchased the land and applied for a zoning change that would allow it to develop a cemetery despite the village’s ban on burial sites, according to a summary by Sahn, Ward, Coschignano PLLC. The village board rejected the application, which prompted a six-year legal battle in New York State Supreme Court that ended in 2006 with a ruling in the diocese’s favor, the summary said.

In 2010, the diocese received approval from the village to turn the majority of the property into a cemetery but set aside 27.6 acres at the northern end of the property for a nine-home residential development. The amendment the diocese sought and received approval for on Monday eliminates the proposed housing development, adds 18 acres to the cemetery, and leaves the remaining 9.6 acres for a use yet to be determined, said Jeffrey Forchelli, an attorney for the diocese.

“The revised plan is substantially better than that approved in 2010,” Forchelli said, saying  protection of the grounds from storm water runoff would be “state of the art.”

In addition to its environmental benefits, the amended plan includes three layers of visual screening that will prevent neighbors and passers-by from seeing the interior of the cemetery, Forchelli said. That screening includes an outer layer of trees and shrubs, a 6-foot-tall metal fence behind that and an inner layer consisting of a 6-foot-tall berm.

Construction on the property will begin no earlier than next year, said Kevin McAndrew, a partner with the Cameron Engineering, which was hired by the diocese. He estimated it will take 50 to 60 years for the more than 150,000 burial plots to be filled.

Opposition to the plan from nearby residents came from two groups: those living south of the property and those living north of it.

Julia Campbell, who lives near the southern edge of the property, on Jericho Turnpike, expressed frustration that the concerns of those living south of the property had not been taken into consideration because the residents live in the Village of Westbury, not Old Westbury.

“What about people in Westbury?” she asked. “I live across the street’’ from the proposed cemetery.

Hyacinth Moore, another Westbury resident who lives near the diocese property, on Duncan Drive, noted that she and her neighbors had received a notification about the meeting.

“Why send us a letter and tell us to be here, if you don’t care what we have to say?” she asked. “That’s not right.”

The residents to the south of the property raised issues about traffic and aesthetics.

Many left early, dissatisfied with responses from Forchelli, McAndrew and the board.

Residents living near the northern edge of the property criticized the plan’s lack of wooded screening in its northeast corner and expressed  doubt about a projection made by the diocese that burials in the northern portion of the property would not begin for 30 to 40 years.

B.J. Worsham, who lives at 17 Langley Lane, said the eventual commencement of such burials would decrease the value of his home.

“Why would  home value go down?” asked Trustee Edward Novick.

“Show me a place when a cemetery went in and home value didn’t go down,” Worsham responded.

After an approximately hour-and-a-half-long public hearing, the board went into executive session for 20 minutes to discuss adoption of the diocese’s amended proposal.

After the board returned, the village attorney, Michael Sahn, announced a slight adjustment to the proposal, which stated that before development began in the northeast portion of the property, the diocese would ensure that planting is installed as necessary to maintain a 75-foot wooded buffer with neighboring residents.

The board then voted unanimously to adopt the proposal. All trustees were in attendance.