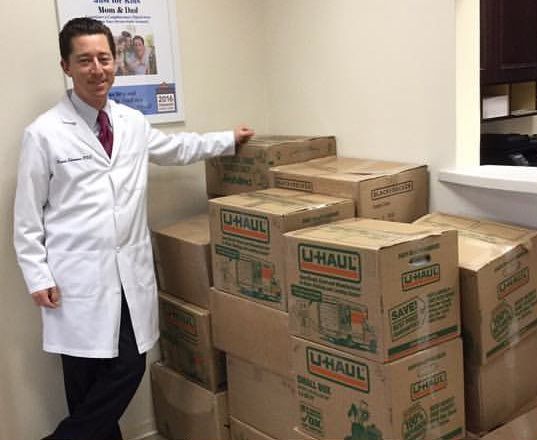 Dr. David Sherman, a Great Neck orthodontist, said his two sons have an abundance of leftover candy every year after their Halloween escapades and he wanted to find an  option other than throwing it away.
“They sort it, they eat some the first night, some the second night, then they forget about it,” Sherman said. “That got me thinking of if there was a better way of disposing all of this candy.”
After a quick Google search, he said, he found Operation Gratitude, a nonprofit group that sends care packages to soldiers, sailors, airmen and Marines deployed overseas, to their children left behind, and to new recruits, veterans, first responders, wounded veterans and their caregivers.
Sherman, a 1996 graduate of Great Neck North High School, said he thought it would be a good idea to collect candy from patients at his offices to donate to Operation Gratitude. He works half of the week at the practice of his father, Peter Sherman, in Great Neck and the other half of the week at his own office in Manhattan.
He said 1,100 pounds of candy were collected, enough to fill  35 large shipping boxes.
Although his patients brought in a large amount of leftover candy for the initiative, Sherman said about two-thirds of it came from residents in the surrounding community.
He said Operation Gratitude listed the locations of his offices on its website for those looking for a place to drop off excess candy, which boosted donations.
One local school brought in 170 pounds of candy, Sherman said, while a Girl Scout troop from Floral Park brought  175 pounds of candy.
“We were not expecting that sort of response,” he said.
Another reason the initiative was so successful was a segment on “Jimmy Kimmel Live!” showing the reactions of children after their parents told them they had given away the rest of their candy, Sherman said. The segment promoted Operation Gratitude.
He said that because of the high cost of shipping all of the candy to Operation Gratitude in California, he decided to also donate to the Ronald McDonald Houses in New Hyde Park and Manhattan. One-third of the donations went to Operation Gratitude, one-third went to one Ronald McDonald House and the rest went to the other.
Sherman said the candy donations are a “win-win” because from a professional standpoint, it takes some of the candy “out of kids’ mouths,” and it gives it to those who didn’t have the same opportunity to collect candy.
Although in moderation candy can be fine, “the excesses that these kids go to in collection of candy can sometimes be overwhelming,” he said. “I think for us it’s nice to be able to parlay that into an opportunity to give these types of candies or treats to people who ordinarily wouldn’t be able to trick-or-treat.”
Sherman said the positive response from people of all ages and backgrounds and the abundance of donations showed that people can come together and join to support charitable efforts despite factors that draw people away from each other.
“Especially in these, what seem to be, very divisive times, it’s nice to see that people, no matter where they come from, patients and nonpatients, that they’re willing to put all that stuff aside and support a worthy cause,” he said. “If we can facilitate those types of stories and relationships, then certainly we feel good about that.”
Given the high number of donations, Sherman said he would consider doing the initiative again next year.
“Some days felt like more of a candy store than a dental office, but at end of the day when you look back at it, it’s something we were thrilled about doing and thrilled with the response,” he said.