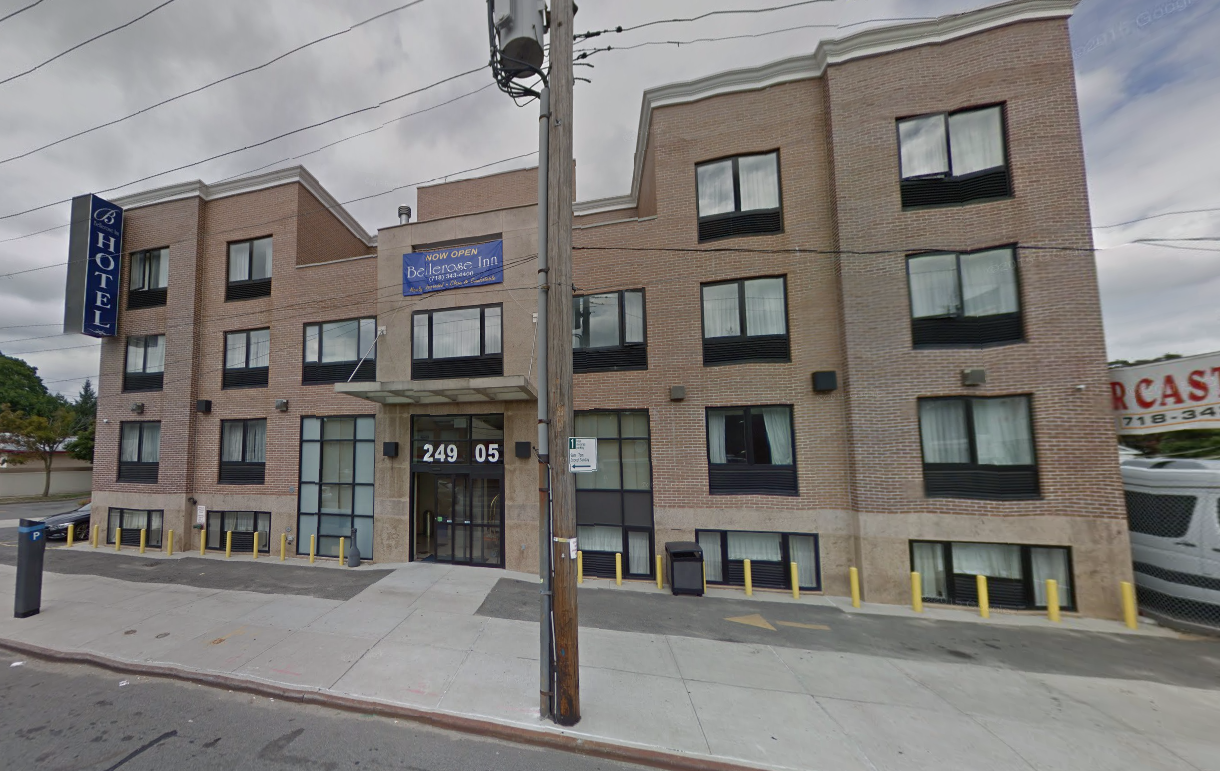 A Bellerose, Queens, hotel being used to house homeless people has several Floral Park and Bellerose residents up in arms.

“I understand they have no home, I have compassion for them, but they don’t respect us, and they’re bringing down our quality of life,” said Angela Augugliaro, president of the Queens Colony Civic Association.

New York City’s Department of Homeless Services is renting 40 of 43 rooms at the Bellerose Inn at 249-5 Jericho Turnpike to house homeless families with children, according to the department and Sheila Moriarty, vice president of the Bellerose Terrace Civic Association.

There are no current plans to make the hotel a permanent shelter, and the city has 24-hour security, on-site social workers and a curfew for all residents, the department says.

But Queens and Bellerose residents at a civic association meeting Thursday night said they have recently seen panhandling and other suspicious behavior nearby.

Some are concerned about children’s safety, as there are six elementary schools within a mile of the hotel, Moriarty said.

Jill Popolizio of Bellerose Terrace said her children were traumatized after seeing a man engaging in lewd behavior outside the 7-Eleven about a block away.

She saw the same man sleeping outside a nearby Staples store later that night, she said.

“How do I protect, go forward knowing that my children are not going to be exposed to this?” Popolizio said. “I moved into this neighborhood because I didn’t have these issues on the streets, and now they’re there.”

The NYPD’s 105th Precinct regularly patrols the area and has made two arrests and issued 11 marijuana summonses and eight open-container summonses on the hotel’s block in the past four weeks, Lt. Mike Lauterborn said.

The precinct got complaints of prostitution at the hotel, but did surveillance and saw no evidence of any, Lauterborn said.

Some of the people behaving badly, such as the man near 7-Eleven, may not be staying at the hotel, he said.

Police also respond to the hotel to help emotionally disturbed residents or deal with other issues, Detective Jovoda Cooper, the precinct’s community affairs liaison, told the crowd of about 75 at Thursday’s civic group meeting.

“Your fight is to either change it, or do something about that part [the hotel]. That’s your fight,” Cooper said. “Our fight is we have to embrace whatever we have coming at us in the community, and this is what’s coming at us now.”

The Department of Homeless Services is legally obligated to provide shelter for homeless people. Families with children seeking temporary shelter must go through an application process that involves an interview with a case worker who determines whether they are eligible and explores other housing options with them, according to the department’s website.

Families staying at the Bellerose Inn are expected to check into the shelter by 9 p.m. if they have school-age children or by 10 p.m. if the children are older than school age, the department says.

“We thank the communities and businesses standing with their neighbors as they navigate the most difficult situations of their lives, and we are doing our part to bring appropriate security and social services to the sites we utilize, including those that are, like this space, not functioning as homeless shelters,” Lauren Gray, a department spokeswoman, said in an email.

The issues have not spilled into Floral Park, Tweedy said, but he told Bellerose civic group members the village is as concerned as they are about the shelter.

There were rumors that the Floral Park Motel on Jericho Turnpike was also housing homeless people, Tweedy said, but its owners turned down the Department of Homeless Services’ offer to do so.

“It really must be a stressful life for the people that are in that transitional world,” Tweedy said in a phone interview.