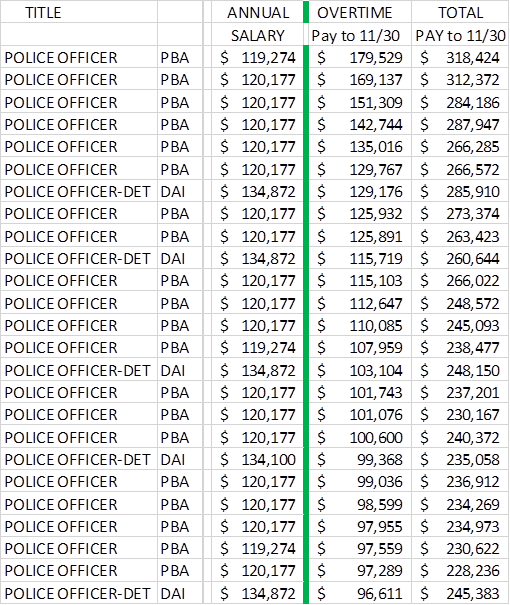 The Nassau County Police Department’s overtime pay for 2016 is projected to exceed $69.9 million, with more than 30 police officers earning more than $100,000 in extra pay, according to Nassau County Comptroller George Maragos.

The 2016 overtime costs are projected to surpass the budget by $13 million, or 23 percent, Maragos said.

Police overtime has been a recurring problem, Maragos said.

“While most officers appear to have reasonable overtime, greater oversight and better management of overtime would seem appropriate for those earning significantly above the median,” he said.

Maragos, who switched parties to run as a Democrat for county executive, said the high overtime earnings seem to reflect a small number of officers who are close to retirement.

“For the first time in 2016, Nassau County will have a number of police members who will earn more than $300,000 in total earnings,” Maragos said.

Krumpter said Maragos released the report without consulting the police department and said the audit is “political motivated.”

“It’s disingenuous to issue a report without having any discussion,” Krumpter said. “It demonstrates the comptroller’s lack of understanding of police operations and the Nassau County police labor contracts.”

Krumpter added that operations pushed by Homeland Security, the presidential election and the Verizon strike all contributed heavily to the amount of overtime needed.

“If you want to correct the issue, you have to identify the cause,” Krumpter said. “These are incidents you don’t experience every year, and won’t experience for several years.”

Maragos’ comments come a week after NIFA rejected the county’s proposed $2.9 billion budget for 2017, which at first included a $105 traffic and parking ticket surcharge to fund the hiring of 150 new cops and 81 civilian officers.

The Legislature cut the fee, proposed by Mangano, to $55 last month and applied it only to traffic tickets.

“It must be noted that the 2017 budget includes the hiring 150 police officers and 81 public safety personnel to secure our county and respond to ambulance calls, which together will reduce overtime,” Mangano said.

The county spent $66.4 million for police overtime last year, according to the budget.

The 2017 budget has $56 million allotted for police overtime.

“Nassau County is one of the safest large suburban counties in the nation due to our well-trained and dedicated police officers as well as the fact that this administration refuses to compromise public safety,” Mangano said. “We will continue to police our county and assign the appropriate number of officers in these times of global terror threats and to combat the flow of heroin.”

“Police overtime is always a source of concern,” Barsky said in a statement. “The county clearly has to do more to manage the issue.”