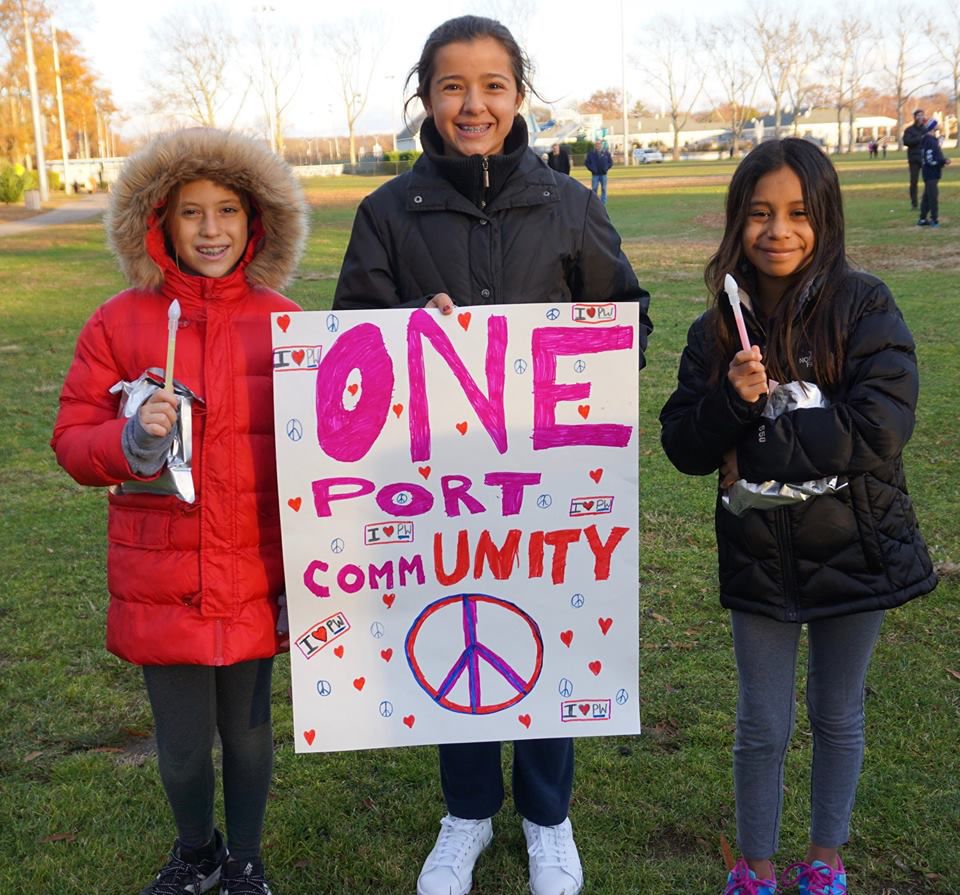 Holding candles and signs filled with messages of peace and unity, Port Washington residents gathered in Manorhaven Park on Sunday to honor the community’s cultural diversity.

Around 600 people came to the inaugural One Port Community gathering, organized by Port Washington residents.

“We just wanted to organize an event that shows our community’s diversity and our unity,” said Cherie Khan, a resident and one of the event’s organizers. “There was no specific reason other than having a celebration of our town and its inclusiveness.’’

Diane Venezia Livingston, another resident organizer, said the event was planned in less than a week. “The strong community involvement in the program really attests to the fact that there’s a big spirit here in Port Washington,” she said. “It was quite amazing.”

Livingston said, and it was noted on the event’s flyer, that the gathering was “strictly nonpolitical,” but it came less than three weeks after a presidential election that divided people around the country.

Residents were invited on stage to introduce themselves in their native language to affirm and present the community’s diversity, Khan said.

Joined by North Hempstead Town Supervisor Judi Bosworth and town Councilwoman Dina De Giorgio, residents stood together, talking to one another about the importance of unity and the cultural diversification of Port Washington.

“Everyone who was there and everyone who spoke reiterated the importance of community and cultural diversity in the community,” Khan said. “One of the reason I was so attracted to Port Washington was the fact that it had such a diverse, wide-ranging community.”

Some people introduced themselves on stage as a way to share their culture, and others, parents and children, stood in the crowd and held signs with peace messages.

One child held a sign with “One Port Community” written in the center, surrounded by words like “friendship,” “love” and “kindness.”

“The signs people made kept with the theme of unity and peace,” Khan said.

In between introductions, local musicians performed songs such as John Lennon’s “Imagine” and Leonard Cohen’s “Hallelujah” to affirm the message of peace and togetherness, Khan said.

“The musicians added another side to the celebration,” she said. “It was really all about shining a light on this issue in any way possible and we did it in a few different ways.”

The idea of the event, Livingston said, was for everyone to set aside their political and religious beliefs and bond the Port Washington community.

“Port Washington residents work really well together,” she said. “I think it’s just another way to be reminded. There was no agenda, just togetherness.”

Both Livingston and Khan said because of the event’s success, they will consider doing it again in the future.

“It was a community event for everyone,” Khan said.