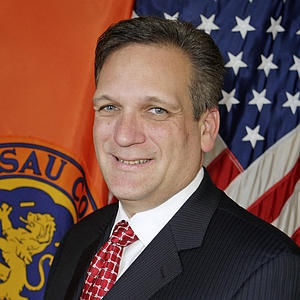 Nassau County Legislator Kevan Abrahams said the Democratic Legislators will not call for the resignation of County Executive Edward Mangano after he was arrested Thursday morning on federal corruption charges, while a group of Republican state Senators and state Senate candidates called for Mangano, and Oyster Bay Town Supervisor John Venditto, to step down.

“We had just got the opportunity to glance over the indictment,” Abrahams said. “We are not going to call for any resignations at this time.”

State Sen. Jack Martins said it was important for the party to come together and “make a clear statement.”

Although Abrahams said the Democrats will not call for Mangano’s resignation at this time, he said these arrests should renew the call for for an independent Inspector General.

Abrahams said the Democrats have called for an independent Inspector General five times already this year.

The charges against Mangano, his wife, Linda, and Venditto stem from an alleged relationship with former Long Island restaurateur, Harendra Singh, sources familiar to the case told Newsday.

The county executive is also facing one count of extortion and, along with his wife, one count of conspiracy to obstruct justice.

Martins said he believes in the sentiment “innocent until proven guilty,” but there should be “zero tolerance when it comes to corruption.”

He was joined at the press conference in front of the Nassau County Executive and Legislative Building by state senators Kemp Hannon and Carl Marcellino and state Senate candidates Elaine Phillips and Chris McGrath.

Martins and Hannon said that no recommendations have been made as to who could serve as potential replacements for both Mangano and Venditto.

According to Newsday, the Manganos turned themselves in to FBI offices in Melville and Venditto was arrested at his home.

“More than a year ago, I said that Nassau’s archaic financial and oversight practices were a recipe for corruption and I proposed comprehensive reforms that the Legislature and County Executive have stonewalled,” Nassau County District Attorney Madeline Singas said in a statement. “Today’s charges and our investigations underscore the importance of passing strict ethics and oversight reforms to protect taxpayers, and I renew my call for immediate action to drain this cesspool of corruption and restore confidence in the integrity of our government.”

Sources told Newsday that Singh is currently negotiating to cooperate with government officials for a more lenient indictment on his own bribery and tax fraud charges and for falsely receiving nearly $1 milliion in FEMA funding for superstorm Sandy damages caused to his Long Island City restaurant.

Singh allegedly received two contracts from the county, sources told Newsday, one for the supply of $200,000 worth of bread and rolls to the county jail and one for providing $237,000 worth of food to county employees after Superstorm Sandy.

He was arrested in September 2015 on charges of bribing a deputy attorney in the Town of Oyster Bay with a $36,000 luxury car lease and $50,000 in exchange for $32 million in loans for his businesses, which include concessions within the town.

By Joe Nikic and Stephen Romano