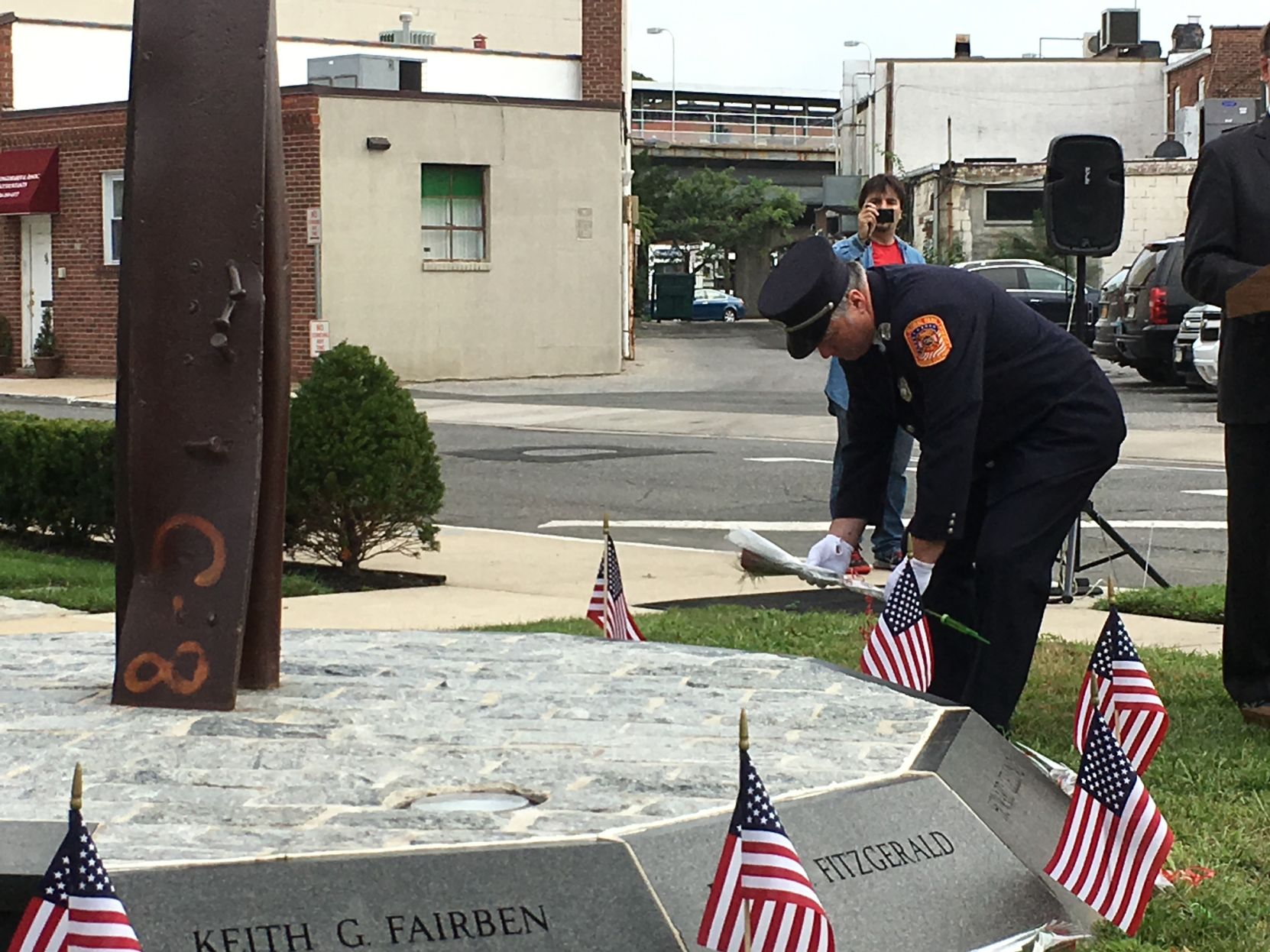 Except for the church bells ringing nearby, the crowd in front of Floral Park’s Village Hall was completely silent Sunday at 8:46 and 9:03 a.m., the moments when planes struck the World Trade Center’s twin towers 15 years ago.

The terrorist attacks that killed nearly 3,000 people then caused noise and terror to ripple from downtown Manhattan across Long Island, the U.S. and the world.

The bells ringing to mark the first plane crash broke almost 10 minutes of silence among the crowd of about 150 residents, clergy, firefighters and village officials at Floral Park’s annual 9/11 remembrance.

More followed after village Mayor Thomas Tweedy read the 11 names of village residents killed in the attack and before the bells rang again.

That silence brought back Jim MacDonald’s vivid memories of a day that still carries much emotional weight.

“I closed my eyes and you can visualize the two explosions,” said MacDonald, a Vietnam War veteran and past commander of the Floral Park American Legion. “It’s still right there in the front of your mind.”

It also creates the space to remember not just the horror of the attack and those who died, but also “to really be proud of our country and really how much further we’ve come, hopefully,” said Susan Walsh, Floral Park’s village clerk.

MacDonald, a 69-year-old carpenter, was working on a house the morning of 9/11 when reports of the attack came over the TV, he said.

He left and went to the John Lewis Childs Elementary School, where one of his children was a student. His wife was the president of the Parent-Teacher Association there and had to break the news to a room full of mothers, many of whose husbands had gone to work at the World Trade Center that morning.

“It was a terrible, helpless feeling,” MacDonald said.

Like those who died in that war, MacDonald said, the 9/11 first-responders sacrificed themselves to save others, running into the towers when everyone else was running out. Two Floral Park residents killed in the attack were New York City firefighters and one was an NYPD officer.

“Even when they … started thinking that it might collapse, they were still helping people,” MacDonald said. “And that’s what we’re about — people willing to give their lives for other people.”

In all, 2,977 people died in the 9/11 attacks at the World Trade Center and the Pentagon and on another plane that crashed in Shanksville, Pa. Thousands more suffer from health problems caused by exposure to toxins at Ground Zero.

The ensuing wars in Afghanistan and Iraq resulted in more than 6,800 U.S. military deaths and, by some estimates, more than 147,000 civilian deaths.

Prayers from three local clergy asking God for peace and wisdom 15 years after the attacks that changed so many lives, and for the safety of today’s first-responders, bookended Floral Park’s ceremony.

“Give us strength to pray for those that hate us,” prayed the Rev. Piotr Rozek of St. Hedwig’s Church. “Give us insight to respect different faiths and cultures. Give us compassion to reach out to all who experienced the loss of life both on Sept. 11 and throughout the many conflicts that have followed.”