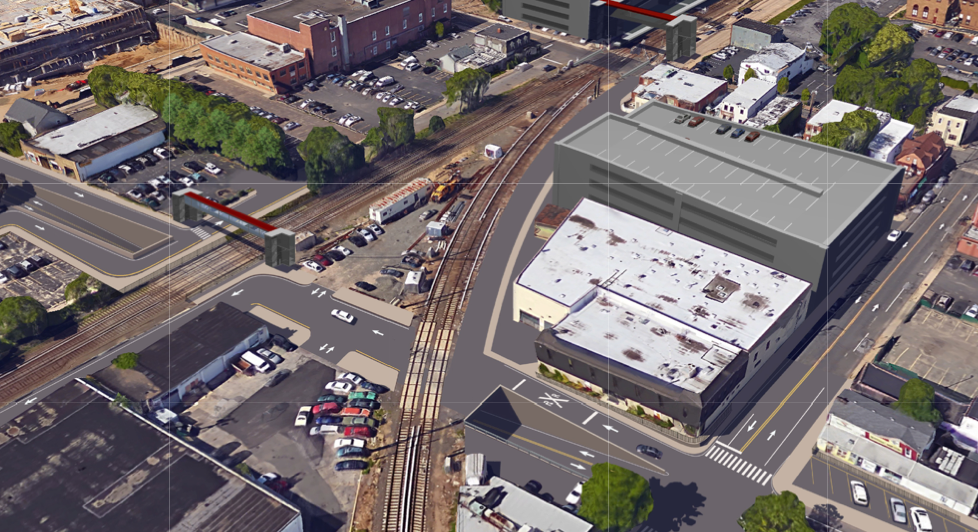 Assuming it will get done regardless of local objections, they will fight the project if plans reveal it’s worth fighting, but meanwhile are trying to make it as amicable as possible for residents, Strauss said in a recent interview.

“While we’re weighing all this out, we’re still looking to negotiate — if it’s going to go through and the governor’s going to push it through, well, what could we get as a bonus for the village?” Strauss said.

Talks have led to two proposed parking garages, Strauss said — one at the corner of Main Street and Front Street, and another between Main Street and Willis Avenue, according to the project scoping document, the outline of its environmental study released last month.

Mayors of other local villages along the 9.8-mile-corridor between Floral Park and Hicksville say they are waiting until full plans come out before deciding how to address still-uncertain impacts.

New Hyde Park officials have only responded to planners’ ideas, not negotiated as if a project they find objectionable is a done deal, Mayor Robert Lofaro said.

“Speaking of mitigation at this point is signing the terms of your surrender before you’ve fired the first shot,” Floral Park Mayor Thomas Tweedy said.

Mayors of villages along the LIRR’s Main Line were strongly united against the Metropolitan Transportation Authority’s larger 2005 third track plan, which was ultimately abandoned for lack of funds.

New Hyde Park and Mineola are home to five of the seven street-level railroad crossings the LIRR plans to eliminate as part of the project, something almost universally supported as improvements to safety and traffic flow.

Plans also include renovations to five of the seven stations along the corridor, excluding Floral Park and Hicksville, the scoping document says.

A parking garage is also proposed for South 12th Street in New Hyde Park, where some worry construction would affect parking near the railroad.

Some Mineola residents living closest to the tracks are concerned about the project’s potential impact on them, and the worries about potential harm to downtown businesses, Strauss said.

But opposition has been scant overall, and some homeowners’ lives “may actually be enhanced” if Cuomo and the LIRR make good on their pledges to take no residential property and reduce railroad noise, he said.

“There’s going to be a challenge down there, and with the support of the residents, I think we can get through it if it happens,” Strauss said.

Conversations about amenities may come if the project’s environmental study indicates it should be done, he said, but village officials have prioritized shaping planners’ proposals to incorporate residents’ concerns.

“We will continue to lobby to have elements built into the project that we feel are needed and necessary,” Lofaro said. “… But we’re looking to see how things evolve and we’ll continue to try to fight for really what’s best for the community.”

There’s little room in Floral Park to build “goodies” such as parking garages, which are no substitute for real mitigation of harmful impacts or broader improvements to the LIRR system, Tweedy said.

Fixes to Floral Park’s elevated station, which has cracked concrete and lacks handicap accessibility, and the elimination of the street-level crossings should be done regardless of whether the third track is built, not attached to a project many residents do not want, he said.

Third track proponents argue the project would boost Long Island’s economy by strengthening its connection to New York City, while creating a path around accidents that cause LIRR delays.

A project spokesman, Shams Tarek, declined to comment for this article, but has said planners are engaging in an unprecedented public outreach process and continue to meet with village officials and community leaders and collect comments through the project’s website.

“The public outreach effort is informing stakeholders about the project alternatives, soliciting their feedback, and communicating the potential project benefits and impacts,” the scoping document says.

Project officials have promised to build the track entirely on LIRR property and avoid taking any residential property. An environmental study of the project is underway, and a public comment period will follow the release of a draft environmental impact statement, expected later this year.