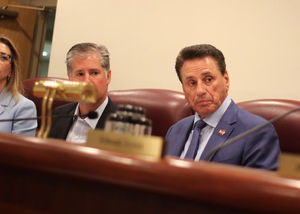 A  legal claim brought by an Old Westbury resident, Michael Ostad, against the Village of Old Westbury and its Police Department for an alleged wrongful arrest came to a close on Oct. 17, when the village board voted unanimously to ratify a settlement of the case.

Abby Pendleton, Ostad’s attorney, said he was “pleased with the outcome of the case.”

The litigation concerned an incident that took place on the night of Sept. 8, 2015, when Ostad was arrested following a runoff trustee election for allegedly returning to Village Hall hours after he voted and refusing to leave.

Ostad was reportedly told by a police inspector to leave Village Hall multiple times following the closing of polls at 9 p.m., but he instead asked the officer to show him proof that he was not legally allowed to be at the property, according to Newsday.

Ostad reportedly attempted to step toward the officer, “got into his face and chest bumped” him, and began to “scream, curse, flail his arms in a violent manner” and yelled “do not touch me, and get off me,” according to the complaint filed soon afterward.

On Dec. 4, 2015, Ostad brought his claim against the defendants, who also included a village police inspector, Dennis Mccavera, and an unidentified police officer, according to a village resolution settling the case. The settlement not only resolves the claim but ensures that no attorneys’ fees or any other costs be paid by one party for the other.

“The Board of Trustees finds that it is in the best interest of the village respondents to approve and authorize the settlement of the claim pursuant to the board’s authority under the village law in order to avoid the expense, inconvenience and uncertainties of continued litigation,” the resolution said.

Carillo will soon release a public letter expressing his and the village’s regret for the incident.

Efforts to reach Ostad and Pendleton were unavailing.