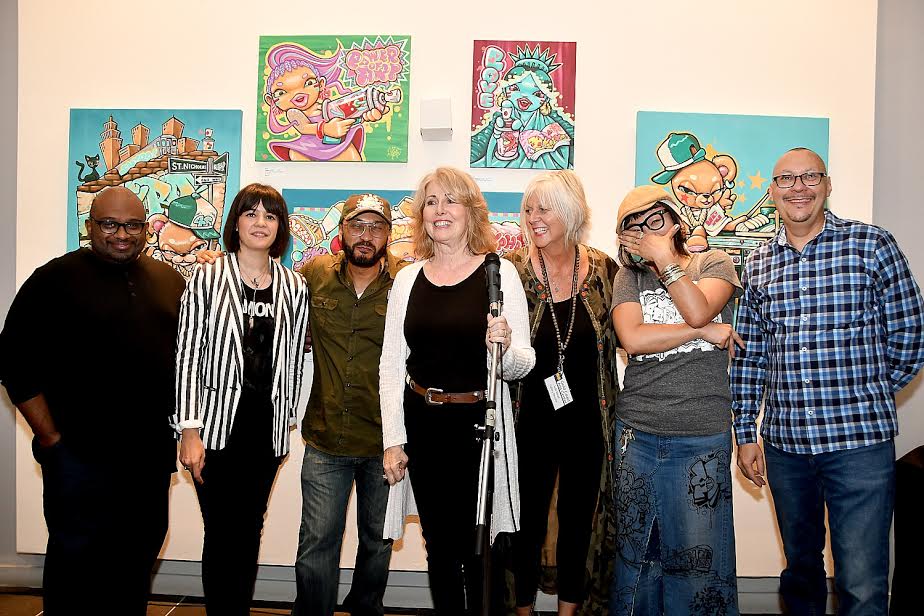 Curator and gallery director Jude Amsel said she chose this kind of exhibit to create a bridge between urban and suburban life. “It’s about bringing a bunch of visual, cultural influences to the forefront in galleries,” she said. “These were artists that are now in major museums and galleries and a lot of them, they honed their skills on the street; others were working in their studio and they really found their own voice.”

Works by Lenny Achan, Michelle Carollo, Luis “Zimad” Lamboy, Will Power and Shiro are all on display.

Achan grew up in New York City and always had a strong appreciation for the laws of nature and geometry, which is evident throughout his work and use of old city transit maps to create animals such as dogs and birds. This is evident in his 36-by-36-inch piece titled “City Boy.”

“My philosophy of modern art and the street art movement has been heavily influenced through studying and experiencing global disruption of various commercial and political industries,” Achan said in the exhibition catalog.

Carollo has on display a mixed media piece titled “Steampunk Davis” that is eight feet tall and eight feet wide. She said she tries to include elements of gender, pop culture and domestic industry in her work.

“By using a series of symbols, figures, and built handicraft, my work blends the playful with the serious. I draw on multiple references from cartoons to graffiti and entertainment, as well as technology and the history of art,” she explained in the catalog.

Amsel pointed to Carollo’s description of the work as a “real visual mashup that remixes spontaneous information with a type of order.”

Lamboy also works with mixed media, yet on a smaller scale. His work “Hulk” is centered on the color green. It includes aspects of spray paint, graffiti, subway signs and old New York City taxis, green butterflies and Kermit the Frog, not to mention the Hulk superhero.

Lamboy explained how he is returning to his roots in the Bronx through his work. “In the mid ‘80s, I discovered creating graffiti, collage and mixed media on paper which wasn’t being done at the time by any of my peers,” he said.

“He’s telling a story of all the walls he’s done – and he’s done thousands of them – and all the characters he’s created,” said Amsel.

Power’s works on display appear to be birds with spray paint can heads. Power, who used to be a graffiti artist in New York City, said these birds are part of the “INV8DERS” series. “The INV8DERS series is a hybrid fusion of a New York City pigeon with spray paint can. The pigeon represents Graffiti and Street artists, the spray paint can head represents The Contemporary Urban Art … The vibrant colorful background on his canvas is his foundation, his evolution from Graffiti,” Powers wrote in the catalog.

Shiro is a Japanese-born artist who portrays hip-hop culture through her work. “In Japan, the only way to get information about hip-hop culture was to read books, watch videos and listen to music,” she wrote in the catalog.

Shiro’s work has many cartoon aspects, bright colors and elements of stylistic New York graffiti. This is shown in all of her pieces on display, particularly “Boombearbox” and “Rum Punch.”

“She couldn’t wait to come to America and experience what … was happening in New York City at the time,” Amsel said, noting that this year marks her 20th year in art.

According to Amsel, the exhibit is very popular, with more and more city residents coming to the arts center.

“I just think that each artist offers something unique and different as to their expression of urban pop,” she said.

The exhibit will close on Sept. 8.

Gerard Terry sentenced to three years in prison
Next Article 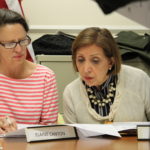