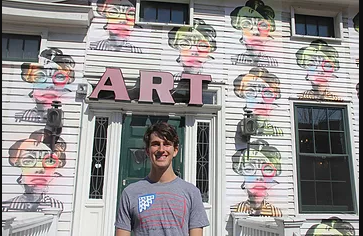 Adam Satovksy said after helping create a large mural for the community in Glen Cove, he learned he could use art to improve the local community.

He said he then realized that’s what he wants to he do with his life.

“When I create art, it feels great,” Satovksy said. “But it also is great to be able to share my creation and passion with others.”

Satovsky, who graduated early from Paul D. Schreiber High School in January, was a featured artist last week in the First City Project, a street art event in Glen Cove introducing communities to a new generation of artists.

More than 60 artists helped transform a 9,000-square-foot home into a living art space by painting murals.

Satovsky, who said he mainly paints and draws and is new to mural drawing, worked on the project throughout the summer.

“It was an incredible experience,” he said. “It was inspiring to see how people can use their creative expressions to give back to the community. I learned a lot being part of this experience and seeing the impact it had on the community, and it’s something I want to take forward in my life in career.

Satovsky said over 1,200 people came out to the First City Project event.

For every one he sells, he said, he will donate one to children’s hospitals and centers, including the Cohen Children’s Medical Center.

“The mission of the project is to encourage more people to explore their imagination,” he said.

Satovsky said it’s a way to improve children’s centers and hospitals after his sister said how gloomy and scary they are when she spent time in the hospital after breaking her arm.

Other than his grandfather, who was a scarf and exotic hat designer, Satovsky said, he’s the only artist in the family, but has a strong support staff from his family and friends.

“All of my friends and family have always supported me,” he said.

Satovsky said he uses music to inspire his art, listening to Jack Johnson, Bob Marley and a variety of jazz while he is painting.

“Music has always inspired me,” he said. “Different music inspires different things, too, like color schemes and different projects.”

Not only does Satovsky listen to music while he’s painting, but he often gets together with friends to play music, he said, playing the ukulele and guitar.

He also played trumpet in high school and jazz band.

Satovsky said he wants to go to college but might take a gap year to continue working on local art projects.

“I had to juggle my day between school and projects I was working on when I was going to class, but without school, it’s awesome to be able to pursue work I want to do,” he said. Although all of this work is still coming in for these projects.”

Satovsky’s work will also be showcased in a group-show gallery opening on April 8 in Amagansett.