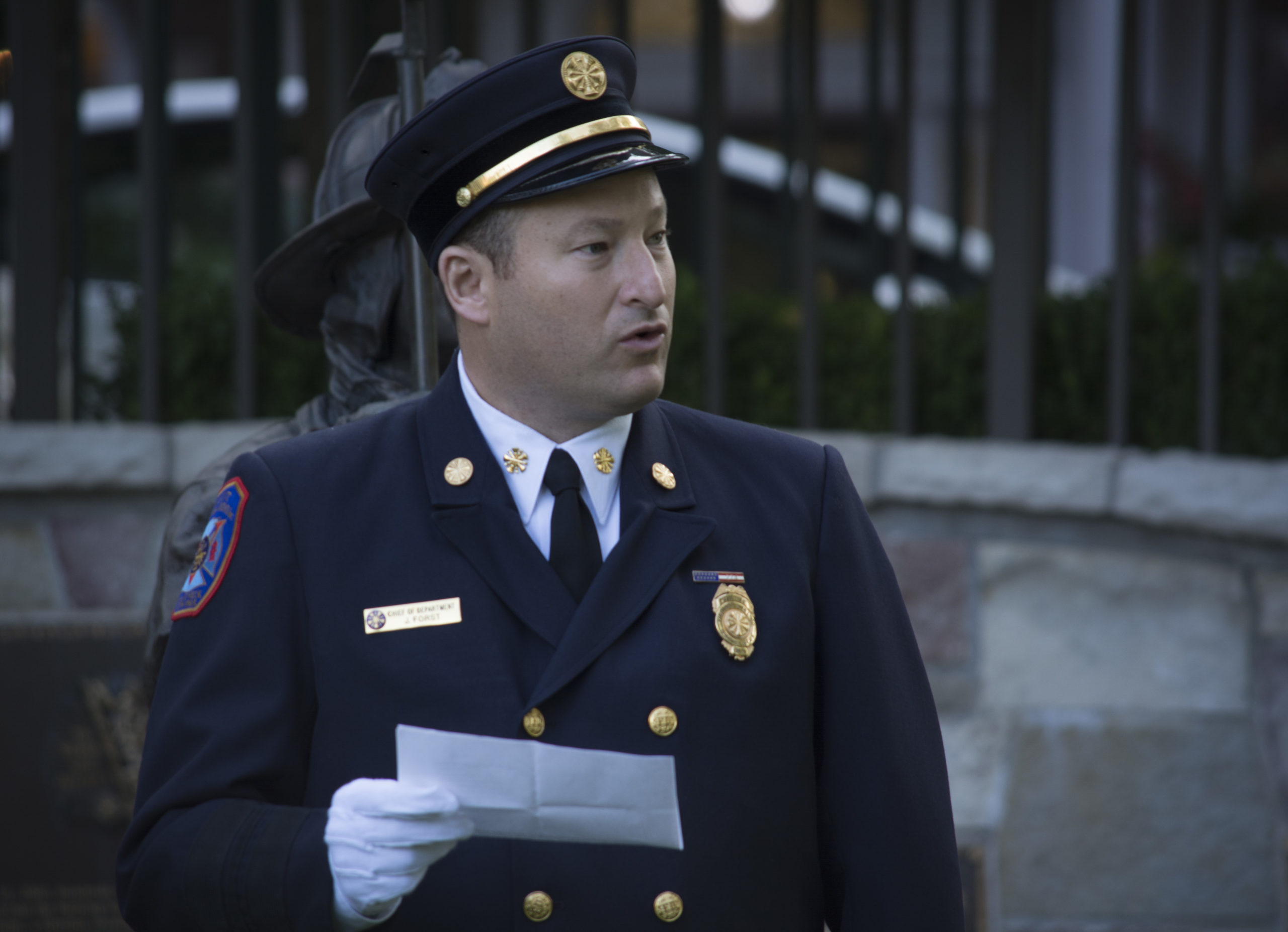 For many Vigilant Fire Company volunteers, Monday began in Jonathan L. Ielpi Firefighters Park in Great Neck Plaza. They gathered in uniform, holding the American and Vigilant flags, as they approached Ielpi’s memorial to commemorate 9/11.

Drills and construction hammers hummed in the background. Then, at 8:46 a.m., sirens howled from the Vigilant fire house, noting the time when a hijacked plane crashed into the World Trade Center’s north tower 16 years earlier.

Ielpi, an assistant fire chief for Vigilant and a New York firefighter, died in the terror attacks on Sept. 11, 2001.

At the ceremony, Rabbi Marim Charry, a longtime Vigilant member, spoke of the importance of remembering history and what one should learn from it.

“It’s hard work because evil sneaks up on you and before you know it, you’re enmeshed.  So you’ve always got to be alert,” Charry said in an interview. “In American history, you have examples that the price of liberty is eternal vigilance.”

Many of the Vigilant members also went to a memorial ceremony later that day on the Saddle Rock Memorial Bridge.

Members of Temple Israel and the Great Neck community gathered there to memorialize the nearly 3,000 who died in the 9/11 terror attacks. Behind the event’s speakers, buildings and bridges dotted the skyline as the sun set.

And in the place of the twin towers, which some residents remembered burning and sending choking dust into the sky before collapsing, towers of light reached into the clouds amid the darkness.

“I had to pass this bridge and I watched the whole thing happen here,” said Mike Delafraz, a Great Neck real estate investor. “And I got shocked. I froze in my place.”

“Since then we’ve been coming here to commemorate – to bring the memory of the perished to life,” Delafraz added.

While many Great Neck residents once gathered on the bridge to watch the scene, many local firefighters also remembered rushing to the rubble, including Vigilant Fire Chief Joshua Forst, the main speaker for the event.

Forst remembered a day much like Monday. The temperature was above average, there wasn’t a cloud in the sky, and all seemed normal.

Then he saw smoke pouring from the World Trade Center on television.

He immediately turned on his scanner on the computer. He tried calling Ielpi’s cellphone a “dozen or so times,” Forst recalled. Forst initially tried to get back into the city to respond only to be blocked off.

He said his co-workers then banded together, went to a friend’s apartment in Hoboken and watched the towers fall on television.

“And my heart sunk, as I immediately knew that between Wall Street and the fire service, I would know far too many people who had just died,” Forst said.

More than two dozen members of the Vigilant Fire Company ultimately went to the city, Forst recalled, and likely just as many from the Alert Fire Company. Many went through the rubble or manned hoses.

Forst himself would be part of a so-called “bucket brigade,” looking through the edges of the fallen 3 World Financial Center for survivors and others, which was very personal for him.

“Having worked in the World Financial Center for three years and having commuted to Jersey through the World Trade Center daily, I couldn’t comprehend what I was looking at,” Forst said.

But before reaching there, Forst said he remembered Jonathan Ielpi’s son asking him and Vigilant to find his father; his remains would not be found and identified until December.

“Many of us loaded up at the firehouse and went to Forest Row to pick up Jonathan’s father and brother, where Jonathan’s son Andrew asked us to please find his father – something that has lived with us ever since,” Forst said.

Bleck, who went to Ground Zero and then Chelsea Piers with a team, as well as Doris Groene and her son Ray Plakstis, former chief of the Alert Fire Company.

“They both shared a love for the Vigilant Fire Company, their families and Great Neck, and were mentors,” Forst said of Bleck and Groene.

Both died from 9/11-related cancer in the last year, as did Manhasset-Lakeville firefighter Chuck Karen, while Plakstis is currently fighting it, Forst said.

Vigilant members kept returning to help other responders as much as they could, he said.

“The process was repeated by the men and women of your local fire companies until the FDNY asked only that NYC employees work,” Forst said.

Among those who perished that day were many firefighters, police officers and citizens, including six from Great Neck. And ultimately, Forst said, his story is not very different from others in the area.

“As I said before, in no way am I the Vigilant with the longest story, the greatest story, or the most heroic story from Sept. 11,” Forst said. “I can think of a number of people I know whose stories would make mine look like nothing. I’m just glad that I was in the position to give myself.” 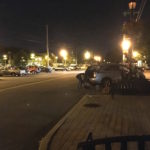 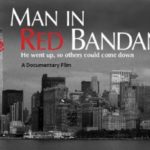