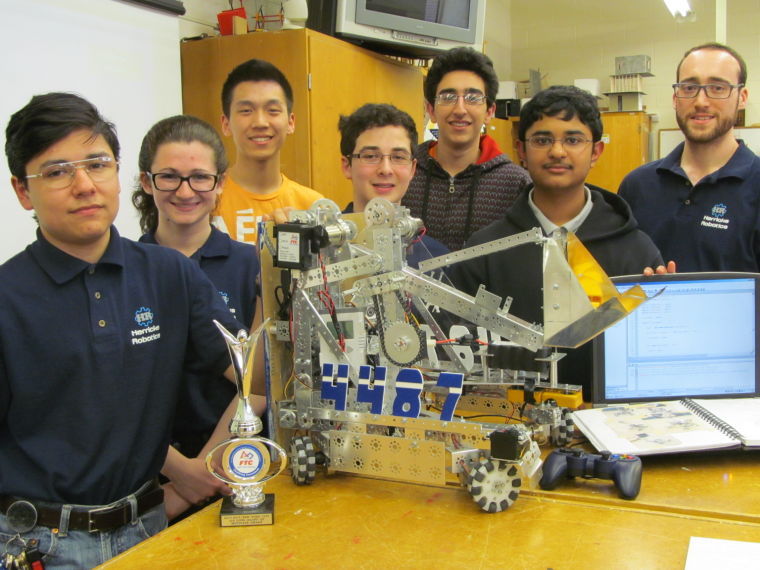 For the Herricks Robotics high school team, it’s wait ‘til next year.

After taking home two top awards from among 30 teams in the Long Island regional competition in January, the Herricks High School team failed to advance beyond the First Tech Challenge World Championship’s statewide competition in New York City on March 8.

“We had some issues in the second round. We talked about it and we improve it for next year,” said Michael Tortoriello, the Herricks Robotics team faculty advisor. “I was proud of making it to the second round. We know how tough the competition gets after the first round.”

Tortoriello said the team tried to increase the robot’s capabilities for the second round but the parts they needed didn’t come on time.

He also said the second-round competition was also tougher, in part, because some teams were able to bring more than one robot  thanks to corporate sponsors – something the Herricks team doesn’t have.

But Tortoriello and team members said they remained proud of their accomplishments in the  regional competition sponsored by First Robotics.

Tortoriello said the team has made steady progress since they began competing four years ago – something next year’s team will be able to build on.

“This year, they had the most complicated [programming] code that they’ve every had. They had more motors,” he said. “Because of the way they’re able to program and work together, they’re unbelievable.”

This year’s competition required teams to build robots to scoop up plastic cubes and dump them into bins suspended above the floor surface in two stages.

Herricks Robotics Club leader Bernadette Haig, a Herricks senior, successfully piloted the robot because, she said, “I had the most practice with it.”

“We did really well on the first round,” Haig said.

Herricks won the Motivate Award at the regionals for its team spirit. And it also took the Inspire Award for the overall design of its robot and their execution in the competition.

“That’s what got us into the next round,” Romero said.

HaiG said she is planning to continue working on robotics in college, where she plans to major in engineering physics.

The 10 members of Herricks Robotics each drafted their own robot design based on the function required. They then incorporated features they’ve seen on other teams’ robots guided by trial and error.

Team members and Tortoriello agree that the students’ intense interest in robotics comes out when compare notes and work to make compromises on the designs. He said the robots take approximately 100 hours of collective work to complete.

“There’s points where people butt heads with ideas,” Tortoriello said. “But the fact they come up with something that does the task they have is pretty amazing.”

The process begins with weekly after school meetings that last until 5 p.m., continuing until the week leading up to the first competition, when several meetings may last until 11 p.m.

Writing the programming code to run the machine is Krishnamoorthy’s specialty. He said collaborated with sophomore Dylan Navy and freshman Eric Weinman to create the software program to direct this year’s model, based on a robot language they learned online, .

Along with the metal parts, including structural parts and gears bought in a $500 parts kit, the Herricks robot has four wheels driven by four separate motors. Tortoriello said the finished product has cumulatively cost $2,000 to $3,000 over the four years.

This year the Herricks team received a $1,000 grant from the Herricks Community Fund to do their work. They also raised between $150 and $200 by producing blue and white keychains that Romero – nicknamed “the wizard” – produced on a 3D printer emblazoned with the Herricks “H” and the high school’s highlander figure and selling them to teachers and schoolmates.

Tortoriello said he organized the club four years ago, in his second year at Herricks, in response to students in his technology class. He had helped out with a robotics team as a student teacher at Baldwin High School before coming to Herricks.

“My students wanted to do it,” he said, noting that robotics will become a part of his class next fall.

“Science fiction is awesome,” he said.