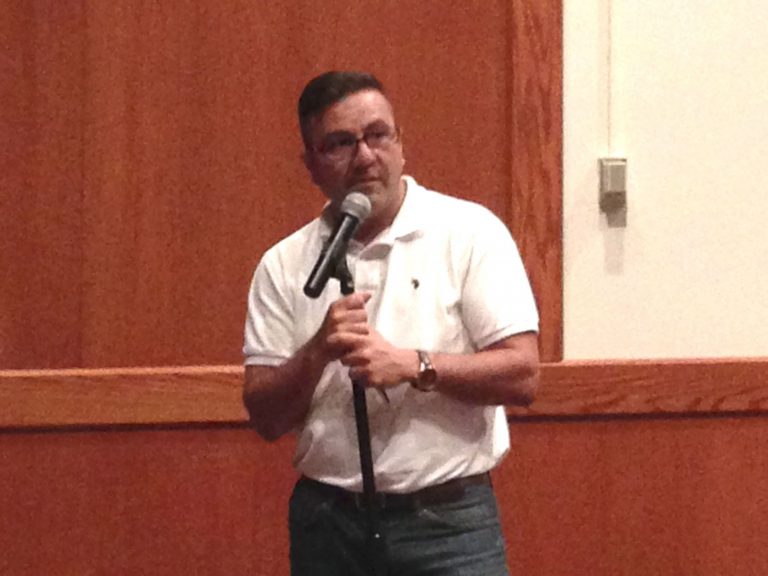 Supporters of a suspended East Williston teacher on Monday accused the district’s school board of flouting transparency and the public’s will.

At Monday’s school board meeting, Nelson Martins, a district resident and 1990 Wheatley School graduate, said the board did not listen to more than 400 students, parents and alumni at last month’s meeting when it rejected their calls for a new vote on the disciplinary charges against Matthew Haig, a social studies teacher.

A former school board member, Robert Kushner, also said the board was contradicting previous policy and accepted law by approving dozens of contracts before next month’s shift in board membership.

“It’s setting a precedent whereby boards can do this in the future, and this is not the way it should be done,” Kushner said. “All these items should be tabled.”

Monday’s comments were the latest public criticisms of the school board from supporters of Haig, a beloved 30-year teacher whose supporters say was targeted by district administrators. Hearings are expected this summer on the charges against him of insubordination, neglect of duty and conduct unbecoming of a teacher.

Martins’ criticisms led to a heated exchange with the school board president, Mark Kamberg. After Martins said school board trustees were using their positions as a “stepping stone” to higher political office, Kamberg shouted “I’m not going to let you disrespect —” before Martins cut him off and drowned him out.

Robert Fallarino, the board vice president, said the board’s decision not to take another vote on Haig’s charges last month did not mean it did not hear the concerns of those who spoke.

“You’re assuming we didn’t listen. You’re making an assumption,” Fallarino told Martins. “… We listened and there was a decision not to do a re-vote.”

The crowd of about 50 booed when the board voted to approve several yearly contracts for services before the new school year starts July 1.

Kushner said it was inappropriate for the board to approve contracts before newly elected Trustee Alan Littman takes his seat on the board next month. He took particular issue with the district’s $50,750 pact with Farmingdale-based law firm Guercio & Guercio, citing a court ruling that says school boards cannot bind future boards to legal-services contracts.

The board approves contracts in June to ensure it has services in place before its summer programs start, such as an on-call doctor for special education programs, Kamberg said.

The contracts are nonbinding until the first July meeting, when the board can revoke them if necessary, he said.

The board approved many similar contracts in June 2015, meeting minutes show, but did not vote on Guercio & Guercio’s contract until July.

The crowd got angrier Monday when the board applied its usual policy not to allow people living outside the district to make public comments, including a retired East Williston teacher.

Under state open meetings law, public bodies such as school boards are not required to hear any public comment at meetings.

After the board adjourned Monday’s meeting over shouts from the crowd, Michael Leshen took the microphone with a flyer showing a screenshot of what he said was a lewd Facebook post from school board Trustee Leonard Hirsch.

“I think this is pretty much conduct unbecoming of a school board member,” said Leshen, a Bay Shore resident who said he has friends who attended Wheatley.

After the meeting, Hirsch told a member of the crowd he had never seen the post, dated March 2013.

The post shows a young woman in a suggestive pose and purports to show a video of a teen engaging in drunken sexual behavior.

The first result of a Google search for the title of the video is an article saying the link is a scam, in which the site posts the link to a person’s Facebook page without their consent or knowledge if someone clicks on it.

Stephen Lecesse, a member of the district’s Financial Advisory Committee, criticized Haig’s supporters’ “perception that there’s a witch hunt against good teachers in the school,” as evidenced by their full-page ad in the Williston Times last week, he said.

“Quite frankly, it’s nice to see these meetings getting back to the business of East Williston residents’ concerns about program and students,” Lecesse said after Monday’s presentations on Wheatley’s college admissions results.