Officials with the Long Island Rail Road and 3rd Track Constructors came to New Hyde Park’s Marcus Community Center last week to provide the public with an update on the status of the third-track project.

Construction of the third rail began in January 2018 and heavier construction activities are already underway along the nearly 10-mile stretch of mainline track. Significant road closures are coming to Carle Place in addition to nightly and weekend work along the railroad right-of-way throughout the Main Line corridor, residents were told last Wednesday.

There will be a significant road closure in Carle Place to begin the Cherry Lane Bridge Replacement project.

Starting April 3, Cherry Lane will be closed from the south side of Mineola Avenue to the north side of Atlantic Avenue for about eight weeks between 7 a.m. and 4 p.m. Monday through Friday.

Detours have been established to help motorists get around the closure. 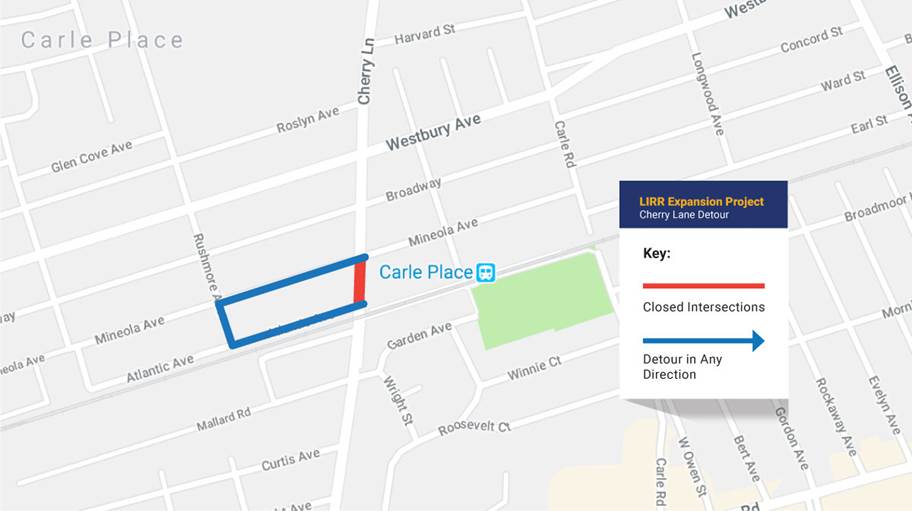 Local Traffic Detour Map. Photo credit: 3TC and LIRR Expansion Project.Vehicles heading in either direction of Cherry Lane are asked to use Mineola, Rushmore and Atlantic avenues to get around the closure. Flaggers will be placed at each intersection to guide residents to their homes.

Local traffic only will be allowed in the area during construction. Commercial trucks will be redirected away from Cherry Lane at the Northern Parkway exit and at Old Country Road.

The Town of North Hempstead will institute a temporary no parking regulation for the duration of construction.

In New Hyde Park, construction is continuing on a temporary firehouse ahead of the closing of grade crossings at Covert Avenue and New Hyde Park Road in the Village of New Hyde Park.

In Mineola, the Mineola Harrison Parking Structure between Harrison Avenue and 1st Street is being replaced with a new five-level, 551-space parking garage ahead of other enhancement to the Mineola LIRR Station and the future elimination of the Main Street and Willis Ave. grade crossings. Construction of the structure is expected to last at least two years.

In September 2018, Gov. Cuomo broke ground at the Urban Avenue grate crossing in Westbury, the first of seven street-level grade crossings that will be eliminated and replaced with overpasses for the LIRR’s third-rail. The project will include six station renovations, bridge modifications and new parking facilities. The project is expected to be completed by late 2022.

The third-rail will run for 9.8 miles from Floral Park to Hicksville and is expected to improve mass transit and reduce traffic congestion. But before improvements are seen, residents should expect major disruptions.

The next LIRR third-track public informational meeting in New Hyde Park will be held Wednesday, April 3, at 7 p.m. at Marcus Christ Hall.

The Village of Mineola has no meetings scheduled to discuss the third-rail project, but the next board of trustees meeting will be held Wednesday, April 10, at 6:30 p.m. at Village Hall where the public can bring up any issues.

Any questions about the work happening in your community can be reached through 3TC’s 24/7 hotline 516-203-4955 or via email at [email protected].