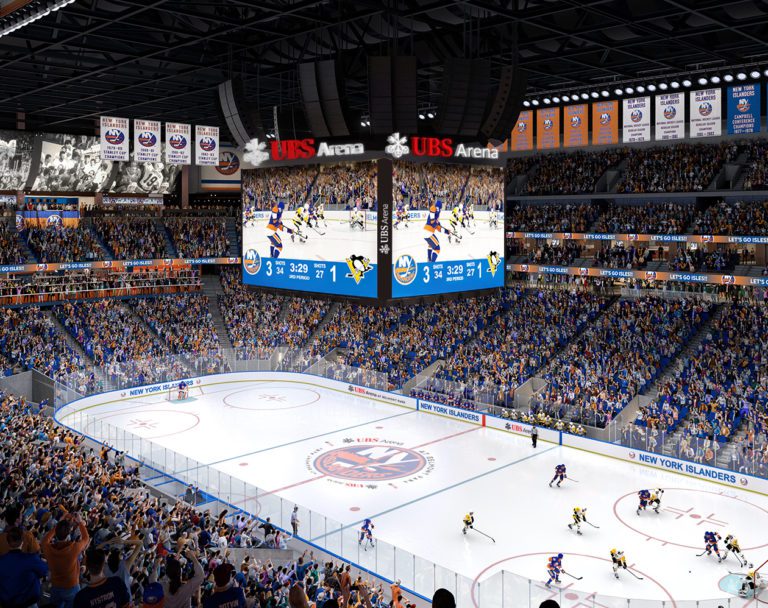 On Saturday, the New York Islanders will host the Calgary Flames and begin a new era in their sparkling new home.

The Islanders will welcome the Flames after 13 consecutive games on the road, spanning two countries and countless flights. It was the second-longest road trip in NHL history, and the longest to start a season.

UBS Arena at Belmont Park will become the franchise’s third home. Since its inception in 1972,  Nassau Coliseum in Uniondale hosted the team, which also played at the Barclays Center in Brooklyn briefly in the 2015-2016 season. Maximum capacity for games will be 17,250, while concerts, beginning with Harry Styles on Nov. 28, will seat up to 19,000.

Along with opening night Saturday, grand opening plans include a ribbon-cutting ceremony on Friday, the Empire State Building and Nassau County Dome lighting up in Islanders colors Saturday, and developers for the arena ringing the bell at the New York Stock Exchange Nov. 29.

Plans for the Belmont Park Redevelopment Project were revealed during the later half of 2017. The UBS Arena broke ground in September 2019 and construction resumed in May after a delay due to COVID-19. Alongside the arena, the plan includes a new hotel and 350,000 square feet of retail space in the future.

The Belmont Park project will cost $1.3 billion, with $1.1 billion going toward the new arena. New York State owns the property and leases it to the New York Racing Association, and for the arena, New York Arena Partners.

On top of delays due to COVID-19, construction has not been completely smooth sailing. For some residents of Floral Park who border the Emerald parking lot on the north side of the park, and the village itself, there have been bumps in the road.

In October, Mayor Kevin Fitzgerald released a statement saying that a land dispute between developers and the village had been settled. He said it has been a priority to maintain and preserve a small property that connects the end of Crocus Avenue, Floral Park-Bellerose School’s playground and the Emerald parking lot at Belmont Park. This area keeps a buffer between local residents and park attendees.

The mayor said construction in the area violated the Empire State Development Corp.’s environmental impact statement, finalized in 2019, that said the area would be untouched and residents would be given privacy screening along the border of part of the north lot.

After assurances construction would stop, developers continued, until state Sen. Anna Kaplan intervened. She was able to have New York’s Franchise Oversight Board issue a notice to developers saying the parcel is owned by the state and the New York Racing Authority. The directive ended further activity on the parcel, Fitzgerald said.

At Tuesday’s Floral Park Board of Trustees meeting, Fitzgerald cited pressing issues regarding the area and the fence intended to maintain privacy for residents.

According to Fitzgerald, the final environmental impact statement said the fence would be much closer to the park, instead of the 10 to 20 feet of space he sees between the fence and the lot.

“We believe that the incomplete fence along the north lot deviates from the final environmental impact statement, and should be much closer to the park than it is to residents,” Fitzgerald said Tuesday night.

In addition to the location of the fence, Fitzgerald said there are too many openings, which fails to separate residents from the operations of the arena, which expects to hold 150 major events annually.

Ftitzgerald said the village is speaking with elected officials and developers almost daily to resolve any potential disputes as the arena’s opening nears.

Also mentioned at Tuesday’s meeting was the village’s intention to strictly enforce all traffic laws including block the box, speeding, parking, DUI and DWI, among others.

Officials said they will be in the park area through this weekend and coming weeks in order to understand the impact an influx of people and cars will have on the village.

“We wish the best of luck to the developers, and hope that quality of life issues are kept to a minimum,” Fitzgerald said Tuesday night.

Efforts to reach the UBS Arena for comment were unavailing.