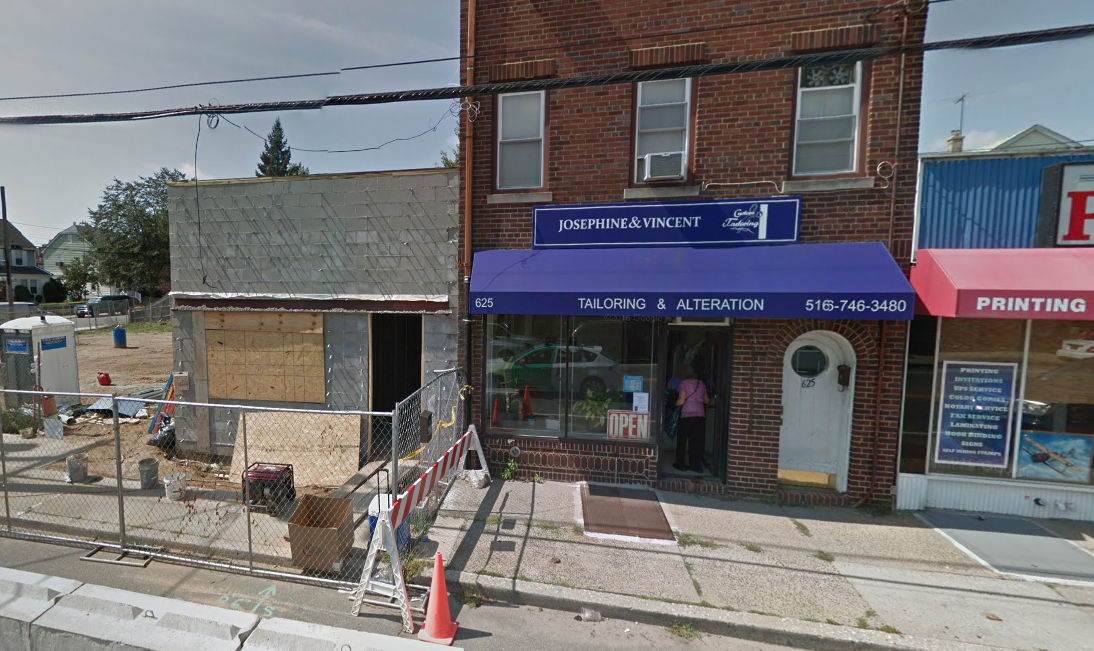 One of Williston Park’s business districts along Willis Avenue has had a hole since July 2014, when a huge fire destroyed four buildings housing six establishments near the intersection with Goodrich Street.

But the hole is a little smaller now, with Dr. Joseph Locurto’s newly rebuilt dental office set to open Thursday at 623 Willis Ave.

Two and a half years later, Locurto, a Manhasset resident, said he’s happy to be back in the spot where he first opened his Williston Park practice in 1995.

“It was sort of a shock, needless to say, but sharing space up here, it’s not like having your own space,” Locurto said Monday. “So we’re pretty excited and looking forward to getting back into our own office.”

The July 24, 2014, fire was one of the biggest in recent memory in Williston Park and was “quite a disaster for the village,” Mayor Paul Ehrbar said.

Along with Locurto’s dental office, it destroyed the former homes of a laundromat, Thee Place Bar, the Village Cobbler Shoe Repair store, Hair Junky hair salon and Williston Plumbing and Heating. The latter two businesses have since relocated.

Locurto was one of only two business owners who also owned the buildings they occupied, he said. Two landlords have decided to sell their still-vacant properties, according to Ehrbar and Ron Doughty, the owner of Williston Plumbing.

“Two and a half years later we’re the only ones to go back, so I would think that it’s had a significant impact on the village, on the residents losing all those different businesses,” Locurto said.

Rebuilding his office was a “long, slow process,” Locurto said.

The village’s Zoning Board of Appeals in 2015 rejected his initial plans to build apartments above his dental office, which met opposition from neighbors concerned about parking.

Ehrbar and the village did not support Locurto as much as he expected, he said. But Ehrbar disputed that, saying the only time he spoke with Locurto was just after the fire, and the plans to rebuild were never under his jurisdiction as mayor.

Most of Locurto’s regular patients, the majority of whom come from the Williston Park area, continued to see him at his temporary practice in Albertson, he said. He’s also maintained good relationships with his business neighbors on Willis Avenue, he said.

“Everybody’s sort of glad that we’re coming back,” Locurto said.

Doughty, who opened his plumbing and heating service business in 1983, said the fire brought him to a new location at 201 Hillside Ave. that better suits his needs and provides more parking for the vans that go on repair calls.

Doughty’s wife and daughter ran the business out of a van parked across the street from the burned-down building the day after the fire, he said. The fire destroyed some sentimental items, he said, but important documents were saved digitally and insurance paid to replace lost furniture and plumbing supplies.

Using his connections in the village, Doughty found a new storefront and signed a lease within a week, he said.

“I was able to just walk out the door and not have to worry about anything and just continue, and that’s what I did,” Doughty said.

While it is uncertain how the rest of the empty lot may be developed, Ehrbar said he hopes new businesses will be able to open there.

He and Locurto said the stores all generated business for each other in the area.

“It’s a good sign for the village that the doctor is coming back and was able to rebuild and continue his practice here in Williston Park,” Ehrbar said. “We’re hopeful that other businesses will be able to do the same, but nothing is on the books right now.”

Military-style gym to open in Mineola
Next Article

Village of Thomaston_Receipt of Tax Roll and Warrant